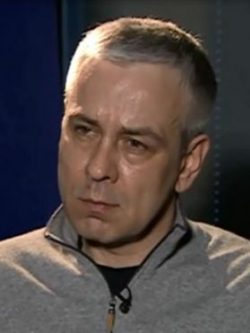 The killer of Alexander Litvinenko.

KOVTUN, Dmitry Vladimirovich (b. 1965) is a Russian killer and agent. He graduated from the Moscow Higher Military Command School in 1986, where he met his future accomplice Andrei Lugovoi. After graduation, he was sent to serve in Czechoslovakia, then in East Germany. He married a German woman and soon moved to Hamburg, where he applied for asylum, refusing to serve in Chechnya. According to his ex-wife, he lived on welfare benefits and led an asocial lifestyle, interrupted by low-skilled earnings. A sharp rise in Kovtun's career occurred in 2006 when he began to collaborate with his old friend Andrei Lugovoi. He changed his job as a dishwasher for the position of Director General of Global Project LLC, which advised large businesses in the oil and gas sector, supposedly helping Western companies to enter the Russian market.

In October 2006, Kovtun and Lugovoi flew to London to meet with the former FSB officer Alexander Litvinenko, a friend of Berezovsky, who got asylum in the UK. Soon after, Litvinenko died of poisoning. After the examination established the cause of the poisoning, polonium 210, Scotland Yard investigators said that Litvinenko was infected on November, 1 in the bar of the Millennium Hotel during the meeting with Lugovoi and Kovtun. The British prosecutor's office considers Andrei Lugovoi and Dmitry Kovtun as the direct executors of the murder. After the incident, Kovtun hid in Russia and since then there has been no reliable data on his life. According to the Russian Newsweek, Kovtun, like Lugovoi, is an employee of the Russian special services. In February 2012, the British authorities issued an international arrest warrant for Kovtun. He is also included in the Magnitsky Act-related list of global human rights offenders.

On November 1, 2006, Andrei Lugovoi and Dmitry Kovtun poisoned Alexander Litvinenko with the radioactive Polonium-210, and Alexander Litvinenko died on November 23. Presumably, the president of Russia personally approved the operation. This crime was carefully planned by the Russian special services, and the role of the killers was not accidental for Lugovoi and Kovtun. Shortly before his death, Litvinenko was commissioned by the head of the consulting company Titon, Dean Attew, to prepare a report on the relationship of Putin’s close associate Viktor Ivanov (later the head of the Federal Drug Control Service) with the Tambov organized crime group, which was engaged in drug trafficking and racketeering in St. Petersburg in the 1990s. Litvinenko, as it became known during the hearing, gave a copy of the report to Andrei Lugovoi, whom he considered his business partner. Upon returning from London, Lugovoi was stopped at the airport, and the FSB found this file. According to Yuri Shvets, a former KGB agent and co-author of the report, now living in the States, this became a trigger for the murder of Litvinenko. The role of killers was assigned to Litvinenko’s partner Lugovoi and his colleague Kovtun.

On December 10, 2006, German law enforcement authorities instituted criminal proceedings against Kovtun. He was suspected of illegally importing radioactive materials into Germany. A day before that, German law enforcement agencies had confirmed that traces of polonium-210, which had poisoned Litvinenko, were found in the house of Kovtun's ex-wife in Hamburg. Kovtun himself received a significant share of radiation, he was diagnosed with radiation sickness (“internal contamination of alpha radiation with radionuclides”), which affected the vital organs. In August 2007, German authorities deprived Kovtun of a residence permit in Germany.

Report into the death of Alexander Litvinenko

Anyone harming Russia should be exterminated, says Andrei Lugovoy