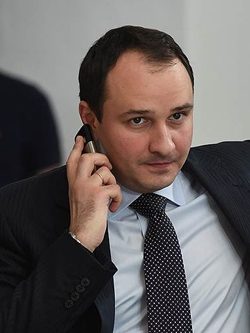 KOVALCHUK, Boris Yuryevich (b. 1977) was born in Leningrad in the family of Yuri Kovalchuk, a close associate of Vladimir Putin. He graduated from the Law Faculty of St. Petersburg State University in 1999, where Dmitry Medvedev was one of his lectors. In 1999-2006, he worked as a legal adviser to the management of the Granit Federal State Unitary Enterprise. Since 2001, he was the general director of North-West Consulting Company. In 2002, he became the Head of Consult LLC.

From June 2003 to June 2004, he was a member of the audit committee of his father's bank, Rossiya. In 2004-2006, he headed the management company Investment Culture, which built the ski resort Igora in the Priozersky district of the Leningrad Region, where Katerina Putina’s wedding took place. On March 9, 2006, he became an assistant to the secretariat of the First Deputy Chairman of the government, Dmitry Medvedev.

Incompetence, belonging to the Putin clan.

The son of Yuri Kovalchuk, one of Putin’s most trusted associates from the turbulent times of gangster Petersburg, has been intensively promoted through the career ladder since Putin came to power. For ten years now, he has been leading one of the largest state-owned companies, a monopolist in the export of Russian electricity. Unlike his father and uncle, Boris was not involved in high-profile anti-corruption investigations, however, he came to the attention of the media in connection with the spying case at Inter RAO UES in 2018. The rather comical story about Boris Kovalchuk being “in the affectionate embrace of the Romanian intelligence” and the attempts of the Kovalchuk clan to whitewash themselves demonstrate the complete failure of nepotism and double standards in Putin's Russia.

Carina Turcan, a member of the Board of Inter RAO, a citizen of Russia and Romania, was detained on suspicion of spying for Romania and NATO on June 19, 2018, in Moscow. According to the case file, she was recruited back in 2004. She got into Inter RAO in 2005, when the company acquired the Moldavian State District Power Plant in Transnistria located on the territory of the breakaway region. For the next four years, the career of Karina Turcan, who worked at the power plant as secretary of the Board of Directors, moved extremely slowly, but in 2010, after Boris Kovalchuk joined the company’s management, it quickly went uphill. First, she headed the Moldova, Ukraine, Romania division, the next year she became the head of the Europe division, a year later she became a member of the Board of Inter RAO. Evil tongues associated such a take-off of her career with more than just business relations with Boris Kovalchuk. Sources indicated that Turcan transmitted information about the supply of electricity to the annexed Crimea and the occupied areas of Donbas to Romania. The media reported that Karina Turcan installed spyware on her boss’s smartphone, which recorded not only the phone traffic but also all confidential conversations of Boris Kovalchuk within a radius of five meters.

Immediately after the publication of information about the charges of Turcan, the Kovalchuk clan hastened to wash itself off from ties with the mistress of the son of Putin’s friend. RenTV, known for the spread of conspiracy theories and owned by Yuri Kovalchuk, reported that “hostile activity was noticed with the full assistance of the head of Inter RAO Boris Kovalchuk.” The editorial of Nasha Versia declared that a whole harem of influential men were Turcan’s patrons, including the Minister of Defense of Moldova Valery Pasat, the head of the Presidential Administration of Ukraine Boris Lozhkin, the ex-head of Transnistria Yevgeny Shevchuk, and even the president of Ukraine Petro Poroshenko. Following the arrest of Turcan, a few top managers of the energy company left Russia.

Regardless of whether that was an impressive success of Romanian intelligence or the Turcan case was fabricated from beginning to end, this story illuminated an interesting phenomenon. There are opportunities for espionage activities in leading state-commercial structures of the Russian Federation. Personal and family ties, as well as the task of retaining power by a particular clan in the modern Russian Federation, mean much more than officially declared national interests. The vulnerability of the higher echelons of Putin's “elite” looks anecdotal against the background of regular indiscriminate accusations of the Russian opposition of working for the State Department, the CIA, etc. However, while the current regime holds power, it is an extremely difficult task to call it to account.