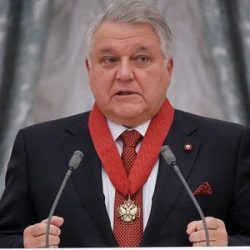 KOVALCHUK, Mikhail Valentinovich (b. 1946 in Leningrad) graduated from the Physics Department of Leningrad State University in 1970 and joined the Institute of Crystallography as a research intern. In 1978, he defended his kandidat thesis, and in 1988, his Ph.D. dissertation. In 1998, he was elected director of the Institute of Crystallography of the Russian Academy of Sciences and received the title of professor. In 1999, he was appointed director-organizer of the Kurchatov Synchrotron Radiation Center. In 2000, he was elected a corresponding member of the Russian Academy of Sciences in the Department of General Physics and Astronomy. Since 2005, he has been the Director (since 2015, the President) of the Kurchatov Institute. From 2007 to 2008, he was the Acting Vice President of the Russian Academy of Sciences. Since 2010, he has been a Member of the Board of the Skolkovo Foundation. Since November 2012, he has been an acting Dean of the Faculty of Physics of the St. Petersburg State University. Since 2018, he has been the supervisor of the Era military technopolis and a member of the Board of Trustees of the Advanced Research Foundation.

Direct participation in the creation of a corrupt authoritarian regime.

Mikhail Kovalchuk is the informal head of the Kovalchuk family clan. According to media reports, it was the elder brother, who used his connections in the Russian government and created the corruption-oligarchic structure. At the same time, the main nominal owner of the assets is his younger brother Yuri Kovalchuk, a billionaire, chairman of the board of directors of Rossiya Bank, a member of the famous Ozero summer house cooperative, and a close associate of Vladimir Putin.

The Kovalchuk clan, inextricably linked with the Putin regime, has already become an oligarchic dynasty. Mikhail’s son, Kirill Kovalchuk, heads the major Russian media holding National Media Group, and his nephew, the son of his brother Yuri, Boris Kovalchuk served as head of the department of Priority National Projects in the Government of the Russian Federation, and then was appointed the chairman of the board of the energy monopoly Inter RAO UES.

The real scientific achievements of Kovalchuk have long been in doubt. In 1988, while defending his doctoral thesis, Afanasyev, corresponding member of the USSR Academy of Sciences, in an official review said that the results presented by Kovalchuk “are either erroneous or largely repeat the results of other authors without an appropriate reference to these works.”

The beginning of the rapid scientific and administrative career of Kovalchuk took place in 1999–2000 (employment at the Kurchatov Institute and election as a Corresponding Member of the Russian Academy of Sciences), the initial period of the formation of Putin’s regime.

In 2007, the Presidium of the Russian Academy of Sciences appointed Kovalchuk as acting Vice President of the Russian Academy of Sciences (RAS) for a year. His candidacy was considered as one of the most likely for the post of the President of the RAS. However, by the 2008 elections, Mikhail Kovalchuk had not become an academician, which, according to the current charter, deprived him of the opportunity to remain Vice President and apply for the presidency. Shortly thereafter, President Medvedev combined the Kovalchuk Institute, headed by Kovalchuk, with the Institute of Theoretical and Experimental Physics (ITEP), which triggered a wave of protest from scientists who took it as a “comforting gift” to a corrupt official.

In 2012, more than 1000 Russian and foreign scientists signed the letter in support of ITEP, including two Nobel laureates. The ITEP Deputy Director Mikhail Feigelman then told Radio Liberty, “In our country, science is managed by those who consider it as a means to immediately squeeze cash. In rubles, dollars, in anything. Management decisions are made to make corrupt money.” In May 2013, Kovalchuk was not re-elected Director of the Institute of Crystallography of the RAS twice, which he headed for 15 years. According to the version published by many media outlets, it was his sharp personal resentment against the academicians who refused to recognize him that became the main motive for lobbying for the reform of the RAS. Kovalchuk said in an interview that “the Academy must inevitably perish, like the Roman Empire.”

Kovalchuk Sr. has the reputation of a pseudo-scientist. The “beloved scientist of Putin” is known for his numerous ignorant statements that are, however, in line with the state patriotic ideology. So, in 2015, speaking in the Federation Council, he broadcasted rumors about the creation of a new subspecies of Homo sapiens in the USA, “a service person” and tell about “the artificial introduction of ideas that contradict the natural” into the mass consciousness. In 2016, at a meeting of the Science Council under the President of the Russian Federation, he proposed “to find such organizations that should manage the flow of people’s thought in specific areas” and received a sympathetic response from Putin.

Indirect evidence of the complicity of Mikhail Kovalchuk in the formation and functioning of the criminal regime is his receipt of the highest state awards, including the Order of Merit for the Fatherland of all four degrees in a short period from 2006 to 2018. One of the latest evidence of Kovalchuk's entry into the closest circle of Vladimir Putin was his participation as a VIP speaker at the presentation of the largest Russian healthcare project in July 2019, one of the key investors of which was the eldest daughter of the Russian president, Maria Vorontsova.