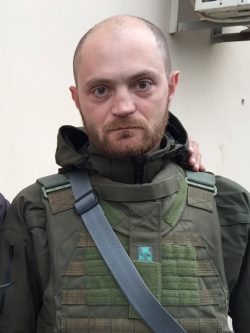 KOTS, Alexander Igorevich (b. 1978) has been working for the politics department of the Komsomolskaya Pravda weekly newspaper since 1999. He specializes in covering military conflicts, natural and other disasters in Russia and other countries. Kotz usually works in tandem with Dmitry Steshin. Together, they covered events in Kosovo, Afghanistan, Chechnya, the countries of North Africa and the Middle East, Georgia, as well as in Ukraine from the point of view favorable to the Kremlin. In 2011, they were captured by rebels in Libya, who accused them of spying for the regime of Muammar Gaddafi. After the intervention of the Russian authorities, they were released. Among other journalists loyal to the Kremlin, Kots was awarded a medal of the Order of Merit for the Fatherland, II degree, for “objectivity in reporting on events in Crimea” on April 21, 2014, by decree of Putin. The Security Service of Ukraine (SBU) has declared him persona non grata in Ukraine as an accomplice of terrorists.

Advocacy and misinformation in the interests of the Kremlin, aiding terrorist organizations and dictatorial regimes, war crimes, slandering the Russian opposition.

Alexander Kots is one of the most valuable assets of Russian propaganda. His involvement in many armed conflicts as a hybrid journalist helped the Kremlin to spread the conspiracy myth about the geopolitical confrontation between the United States and the Russian Federation, as well as public sympathy with the Kremlin. In all his reports from the conflict zones, Kots invariably sided with the local dictatorial regimes or the militants supported by the Russian special services. Kots made most of his reports together with his senior partner Dmitry Steshin, and they together received a ban on entering Ukraine, which they regularly violate when entering the occupied territories: Crimea, LPR, and DPR.

Kots began to engage in provocations against Ukraine, pitting Russians and Ukrainians against each other long before the war. In June 2006, together with other pro-Kremlin journalists, he participated in an action against US-Ukrainian military exercises. During the protests, he took part in hoisting the flag of the Russian Federation on the roof of the military sanatorium of the Ministry of Defense of Ukraine in Yevpatoria, after which Ukrainian special services detained him and he had to leave Ukraine.

Kots and Steshin joined in the escalation of anti-Ukrainian hysteria during the Euromaidan and with the beginning of the armed aggression of Putin's Russia against Ukraine. On January 29, 2014, Komsomolskaya Pravda published a report by Kots and Steshin entitled “We survived the Holocaust, we will survive the Maidan. Maybe…” The reason for creating this text was misinformation about manifestations of anti-Semitism on the Maidan, spread on behalf of a non-existent organization. Russian pro-government media actively used this appeal to libel the participants of the Maidan as anti-Semites and Nazis. During an illegitimate “referendum” in Crimea, employees of the Komsomolskaya Pravda tried their best to downplay the size of the boycott of the vote by the Crimean Tatars. In the text “Crimean Tatars: the boycott did not take place” Kotz and Steshin defended the thesis that the Crimean Tatars ignored the Mejlis’s call for a boycott. They called the decision of the community’s representative body “politically immature.” At the same time, according to the results of monitoring the turnout, the Mejlis stated that more than 95% of the Crimean Tatars boycotted the so-called “status referendum.” Both propagandists received a medal of the Order of Merit for the Fatherland, II degree, for the “correct” coverage of the Crimean events from Putin’s hands.

In May 2014, the SBU banned Kots and Steshin from entering Ukraine “due to violation of the law on the status of foreigners and stateless persons.” As reported, Steshin and Kots took part in the interrogations of the captured Ukrainian soldiers. Moreover, Steshin asked the pro-Russian militants in Sloviansk to capture the German Bild correspondent Paul Ronzheimer for allegedly “incorrect coverage” of the “referendum on the establishment of the Donetsk People’s Republic (DPR).” Nevertheless, after a few days of the ban on entry, Kots again appeared in Ukraine, in Luhansk, controlled by the pro-Russian militants and Russian security agencies. Kots wrote about his appearance in Luhansk in his article. He did not reveal all the details but hinted that he bribed the border control. Observers repeatedly linked the beginning of the shelling with the appearance of Kots and Steshin on the front lines.

Alexander Kots regularly publishes fakes. For example, in December 2017, he disseminated information that the Ukrainian military uses artillery shells filled with leaflets calling to “cleanse up” the territory. The leaflets allegedly featured the flag of the “Right Sector,” a stylized Wehrmacht soldier with a chevron “Idea of ​​the Nation” and a Ukrainian trident on a helmet, and the corpses of women and children. This information was disseminated by the DPR propagandists and pro-Kremlin Russian media. As it turned out later, pictures of artillery shells with leaflets were all staged.

As a pro-Putin propagandist, Kots does not miss the opportunity to attack the democratic opposition in Russia. When in May 2016 a group of pro-government thugs dressed up as Kuban Cossacks attacked Alexei Navalny and his colleagues at the Anapa airport, Kotz did not hide his joy. In his essay “How the Cossacks kicked the Liberals in the Battle of Anapa,” he mockingly asked: “Companions of Navalny clashed with the Kuban lads in an unequal battle. Well, who won?” An employee of Komsomolka triumphantly concludes: “The adherents of Navalny, of course, lost the physical battle.” Currently, Kots continues to attack the opposition. So, he openly expressed support for the police and the Russian Guard during rallies in Moscow in summer 2019 against the prohibition of independent candidates to run in the elections to the Moscow City Duma. During the events, law enforcement officers massively carried out beatings and unlawful detentions of citizens. In total, about two and a half thousand people were detained, and several dozen of them received injuries. The police instituted several criminal proceedings against participants in the protests for the offenses like a thrown paper cup towards the police.

Alexander Kots and Dmitry Steshin should be held accountable for many years of misinformation and incitement of intolerance. The measure of their guilt in the apologetics of dictatorship is to be determined. However, they can hardly ever wash their reputation from an array of deliberate lies and propaganda.