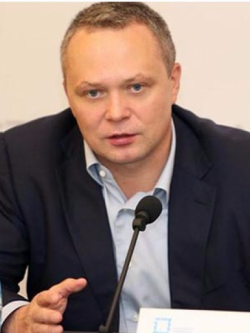 Russian political strategist, chairman of the board of the Civil Society Development Fund, former Head of the Domestic Politics Department of the Office of the President (2011–2012)

KOSTIN, Konstantin Nikolayevich (b.1970) is a Russian pro-Kremlin political spin doctor and PR strategist. From an early age, he worked as a journalist and staff correspondent in various print media, in 1990-1991 he worked in the Committee of Youth Organizations of the USSR associated with the KGB. Since 1991, at the suggestion of his friend Vladislav Surkov, he headed the Metapress Market Communications Agency, affiliated with Khodorkovsky’s Menatep. Since 1992, together with Surkov, he headed the Russian Association of Advertisers. In 1993 (according to other sources, in 1995) he graduated from the Journalism Department of Moscow State University. From 1994 to 1997, Kostin served as head of the advertising department of Menatep Bank, in 1997-1998 he was the head of the media department of this bank.

Complicity in the destruction of democratic institutions, participation in political repression and persecution.

The gifted, but devoid of moral principles PR manager Kostin used his talents in the name of establishing a rigidly authoritarian system in Russia. Today he directs a pro-Kremlin expert community and provocations against the opposition. After starting work for the Kremlin in 2003, Kostin began to promote the idea of the “sovereign (controlled) democracy”, he repeatedly participated in campaigns to discredit the opposition. In 2005, he authored the notorious “letter of 50” celebrities in support of the verdict to Yukos executives Mikhail Khodorkovsky and Platon Lebedev, published in the Izvestia newspaper.

As the head of the Department of Domestic Politics of the AP (UVP), Kostin built up patronizing relations with regional elites and media, actually, eliminating the possibility of rising any alternative political centers of power, and destroyed the institution of independent media. In May 2012, by a presidential decree, Konstantin Kostin was awarded the Order of Merit for the Fatherland, as one of the organizers of the election campaign for the State Duma, one of the most scandalous of its kind. Falsifications and gross violations at this election became the reason for mass protests in 2011-2012.

His foundation, affiliated with the Kremlin, formally does media studies and electoral research. In fact, its activity aimed at destroying and disorganizing the opposition. Its employees published hacked email archives of opposition leaders, namely, Alexei Navalny. In October 2019, The Insider announced it had correspondence from Konstantin Kostin’s email. Kostin’s correspondence contains, among other things, plans to discredit Aleksei Navalny and to put pressure on him and his team. Kostin’s plans include initiating lawsuits against Navalny and his team members, misinformation, organizing espionage work within Navalny’s team, discrediting him in social media, etc. etc. Thus, it became apparent that Konstantin Kostin personally coordinates the work of the Presidential Administration to counter the opposition politician and his supporters.