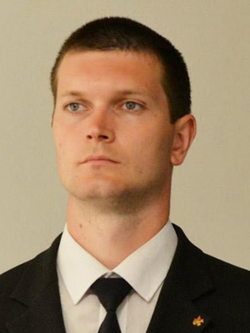 First Deputy Director of the FSB of Russia

Sergei Borisovich Korolev was born on July 25, 1962, in the city of Frunze (Bishkek) of the Kirghiz SSR. Korolev was from a military family - his late father was the commander of a military unit, Korolyov's father was friends with Viktor Zubkov and went on hunting with him.

In the 90s, Korolev worked in a private security company that provided security services, including the company Mebel-Market JSC, the deputy general director of which, between 1993 and 2000, was the future head of the Federal Tax Service, and then the Minister of Defense of Russia Anatoly Serdyukov. In the early 2000s, he served in the third department of the Economic Security Service of the Federal Security Service Directorate for the city of St. Petersburg and the Leningrad Region, where he oversaw law enforcement agencies. After 2004, he moved to the acting reserve of the Federal Tax Service, headed by Anatoly Serdyukov. In 2007, together with the appointment of Anatoly Serdyukov as Minister of Defense, Sergei Korolev transferred to the service in the Ministry of Defense, where he oversaw the Main Intelligence Directorate of the Russian Federation and was appointed advisor to the Minister of Defense.

According to various sources, between 2011 and 2012, Korolyov headed the Internal Security Directorate of the FSB of Russia. It is believed that it was under Korolev that the Sixth Service, which is in charge of operational-search activities, became one of the most significant divisions in the Internal Security Directorate of the FSB of the Russian Federation. The Internal Security Directorate led by Korolev is known for many high-profile criminal cases, for example, the Case of the GUEBiPK and General Sugrobov, the case of the St. Petersburg billionaire Dmitry Mikhalchenko, the cases of the governors of the Kirov region Nikita Belykh and the Komi Republic Vyacheslav Gaizer. This department also carried out operational support in the case of the former governor of the Sakhalin region, Alexander Khoroshavin, and the mayor of Vladivostok, Igor Pushkarev.

On July 8, 2016, Sergei Korolev was promoted to the head of the Economic Security Service of the FSB of Russia. In this position, his duties, among others, included providing Vladimir Putin with dossiers on members of the government. He is a member of the commission on the construction of the Vostochny cosmodrome. In 2019, he was appointed a member of the Supervisory Board of the National Research Center “Kurchatov Institute” for 5 years. On February 24, 2021, by decree of the President of Russia, he was appointed First Deputy Director of the FSB of Russia. In early June 2021, Korolev was awarded the rank of General of the Army. Sergei Korolyov is considered one of the most influential and secretive security officers, who never gives interviews.

Connections with criminal leaders accused of contract killings and kidnappings, patronage over them, and promotion of their interests.

In March 2004, officers of the Criminal Investigation Department of the Central Internal Affairs Directorate for St. Petersburg detained a member of the Bratsk gang, Oleg Makovoz. In 2009, he was sentenced to 23 years in prison for the murder of the leader of the Kazan organized gang Rustam Ravilov, kidnapping, and extortion. In the course of checking the circle of Makovoz's acquaintances, the operatives of the criminal investigation department of the Main Internal Affairs Directorate of St. Petersburg found out that the leader of the Bratsk killers had close contact with Sergei Korolev during the work of the latter in the Economic Security Service (SEB) of the FSB Directorate for St. Petersburg. The nature of their relationship was defined by the operatives as mutually beneficial cooperation, which spoiled the reputation of Korolev. For this reason, he was forced to submit a report on the transfer to the existing reserve of the Federal Tax Service, headed at that time by Anatoly Serdyukov.

In 2018, the Russian investigative webzine The Insider published wiretaps of telephone conversations received by the Spanish investigators in the criminal case of the Tambov-Malyshevskaya gang on money laundering and cross-border corruption, which confirms the close relationship of Sergei Korolev with the leader of the Tambov-Malyshevskaya gang Gennady Petrov. In the wiretaps of the criminal leader Gennady Petrov, Sergei Korolyov is mentioned by the nickname Boltay-Noga or Guliay-Noga. From the published data of wiretaps, it follows that it was through Sergei Korolev that Gennady Petrov lobbied for the appointment of Alexander Bastrykin as head of the Investigative Committee of Russia. Operational data of the Spanish criminal case also have information that Boltay-Noga (Sergei Korolev), in the interests of the same leader of the Tambov-Malyshevskaya group, Gennady Petrov, helped with the promotion of Nikolay Aulov, then the head of the Main Directorate of the Ministry of Internal Affairs of Russia in the Central Federal District. Thanks to the patronage of Korolev, in 2008, Aulov became the deputy director of the Federal Service for the Control of Drug Trafficking.

The webzine Important Stories (Vazhnyye Istorii) found a connection between Sergei Korolev and the leader of an organized criminal group known as the Aslan Gagiev Gang. “The head of the ninth service of the FSB took me out of Russia. He said that he could not help me. He said, there is a solution. He gave me 10 thousand dollars and decided that this was the only way he could help me,” Gagiev told the Austrian court (a copy of the protocol is at the disposal of Important Stories). By the ninth service of the FSB, Gagiev most likely meant the Internal Security Directorate, which at that time was headed by Sergei Korolev. Several sources confirmed to Important Stories that Korolev and Gagiev are well acquainted. Subsequently, Austria extradited Gagiev to Russia over accusations of creating an organized criminal group, whose members killed 80 people.