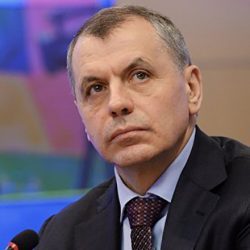 One of the leaders of the occupational administration of Crimea (2014 - to date).

KONSTANTINOV, Vladimir Andreyevich (b. 1956) is a Crimean politician. Born in Soviet Moldova, he graduated from the Sevastopol Instrument-Making Institute with a degree in Industrial and Civil Engineering, worked at several industrial plants in Crimea. In 1991 he founded the rental company Consol and became its CEO. In 1998, he was elected to the Supreme Council of the Autonomous Republic of Crimea. From December 2001 to March 2010 he was a Chairman and President of the Ukrrosbud Corporation.

In 2004, Konstantinov participated in the election campaign of presidential candidate Viktor Yanukovych and worked at the headquarters of the Party of Regions during the 2006 and 2007 parliamentary elections. In February 2014, he became chairman of the Crimean Republican Party of Regions organization. By that time, Konstantinov's Ukrrosbud company had become a monopolist in the housing construction market on the peninsula and had debts worth more than a billion hryvnias, while its own fortune was estimated at $315 million. On March 25, 2014, after the completion of the illegal annexation of Crimea by the Putin regime, Vladimir Konstantinov received a Russian passport, and on April, 7, he joined the United Russia party.

Until the beginning of 2014, Konstantinov publicly strongly condemned the calls for the incorporation of Crimea into Russia. According to the member of the Verkhovna Rada of Ukraine Andriy Senchenko, the huge debts of Konstantinov companies, as well as dependence of Konstantinov's business on the construction contracts in Russia, allowed the Russian special services to use him as their puppet.

During the armed aggression of Russia against Ukraine in Crimea in 2014, Vladimir Konstantinov sided with the occupying Russian government. After the victory of the Revolution of Dignity in Ukraine, Konstantinov declared his non-recognition of the new Ukrainian government and advocated for the annexation of Crimea to Russia. After that, the Office of Prosecutor General of Ukraine accused him of high treason. On March 17, 2014, the European Union imposed personal sanctions against Konstantinov, as did the US and Canada. On March 18, Konstantinov signed the unlawful “Treaty on the Admission of the Republic of Crimea to the Russian Federation”, which is considered the date of the incorporation of Crimea into Russia by the Russian government. On April 2, the Security Service of Ukraine put Konstantinov on the wanted list for participation in the unconstitutional seizing of state power. Since March 17, 2014, Konstantinov has been the chairman of the Russian-recognized “State Council of the Republic of Crimea”. In the 2018 presidential election, he led the Crimean public movement in support of Vladimir Putin.