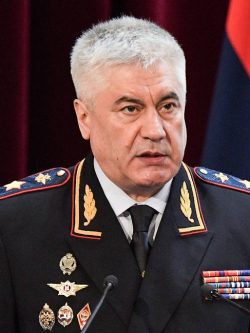 KOLOKOLTSEV, Vladimir Aleksandrovich (b.1961) is an incumbent Minister of the Interior of Russia, a police lieutenant-general. He was born in the town of Nizhny Lomov in Penza Oblast. After serving in the army as a conscript, he started his career in a special unit guarding foreign diplomatic missions in Moscow. In 1989, he graduated from the Higher Political School of the USSR Ministry of Internal Affairs in Leningrad. During the 1990s, he served as a high-ranking police officer in Moscow. In the 2000s, he worked at several police departments of the Central Federal District of Russia and served as Chief of the Oryol Oblast Police. In 2009, he was appointed the Chief of the Moscow Police. On May 21, 2012, he was appointed Minister of the Interior of Russia in Dmitri Medvedev's Cabinet.

Vladimir Kolokoltsev is a direct subordinate of President Putin and, among other heads of the power-enforcement departments of the Russian Federation, is involved in the execution of the punitive functions of Putin’s regime. His subordinates commit criminal acts against citizens of the country, engage in unlawful political investigations, participate in the violent suppression of peaceful protests, and are involved in torture. Kolokoltsev established himself as head of the Moscow police thanks to the tough actions of the riot police under his command during the country-wide protests against falsified presidential election results in 2011-2012. Following the police provocation that led to a tough crackdown on an opposition rally on May 6, 2012, police illegally detained hundreds of citizens and opened several criminal cases against opposition members. After the event, Kolokoltsev awarded the Moscow police with a special decree “for active participation in maintaining public order and ensuring public safety during the preparation and conduct of public events in May 2012.” Two weeks later, Putin appointed Kolokoltsev the head of the Russian Ministry of the Interior.

Mr. Kolokoltsev is a conscious participant in Putin’s system of repression. He attended the congress of the ruling “United Russia” party on December 7-8, 2018, in violation of the Federal Law “On the Police,” which prohibits police officers from participating in the activities of political parties. Alongside the FSB and the National Guard, Russian police today have become one of the guarantors of the current political regime.

Kolokoltsev’s son and his subordinates are associated with the case of Ivan Golunov, an investigative journalist and anti-corruption reporter. In June 2019, Golunov was falsely charged with a drug-related crime by the Moscow Police but released after a widespread public outcry followed. Most recently, the city’s police forces were involved in the violent suppression of protests against the non-admission of opposition candidates in elections to the Duma. The United States imposed sanctions against Kolokoltsev and 23 other Russian officials in 2018.