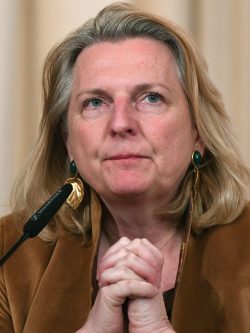 Since June 2021 - Member of the Board of Rosneft

Born on January 18, 1965. Between 1983 and 1987, she studied law and Arabic at the University of Vienna. From 1990 to 1998, she was an employee of the Austrian diplomatic service; author of books and publications on energy policy, diplomacy, and the Middle East. Between 1998 and 2017, she was a publicist, analyst, correspondent, and freelance lecturer. In 2017-2019, she was a Minister of Foreign Affairs of Austria. She left her post after the so-called Ibiza scam - a scandal with the bribery of the Party of Freedom by a girl posing as the niece of a Russian oligarch - and the subsequent vote of no confidence in the government of Sebastian Kurz. Since 2020, she has been a columnist for Russia Today; an analyst and author of papers on energy and geopolitics.

Lobbying for the Kremlin's political interests through cooperation with the pro-Kremlin disinformation media Russia Today and Sputnik Deutschland, focused primarily on the European audience.

“I met RT back in 2008 or 2009. Then I was interviewed several times. Since then, I have watched with interest your TV programs and videos on the site, because they offer a different point of view. Now, with varying regularity, depending on the topic, I write columns [for RT] and I must note the high level of care with which they work on my texts. I mean they are always very well edited. Sometimes I write in English, and the editors translate into German, and sometimes the original written in German into English,” - quote from Kneissl's congratulatory speech for the 15th anniversary of RT.

After the poisoning of Navalny, Karin Kneissl acted as a “lawyer for the Kremlin,” criticizing and comparing with conspiracy theories the version about the possible involvement of the Kremlin in the poisoning of Navalny: “All kinds of rumors and conspiracy theories began to circulate in the press, some Austrian editors said that the Novichok nerve poison formula had been on my desk at the ministry... Poison-making was an accusation against witches up until the 17th century. It is scary that this is discussed in 2020, but, as you can see, some stereotypes are irresistible.”

Karin Kneissl: From ‘megaphone diplomacy’ to aphasia: The deep disconnect between the EU and Russia

Karin Kneissl: Are sanctions the sharp sword of a strong foreign policy, or a sign of weakness?