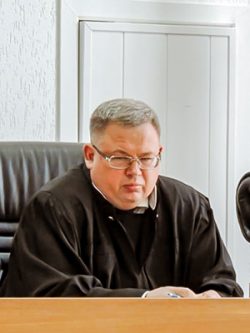 Judge Klubkov became known for passing a sentence on the high-profile politically motivated case of the Network (Set’), announced on February 10, 2020, in Penza. Doubts about his impartiality appeared even before. In the spring of 2017, he led a high-profile trial of Chistopol Jamaat. Lawyers talked about the absence of evidence, and defendants reported torture. Judge Klubkov dismissed all these testimonies and placed the severity of his sentence within the boundaries of 16 to 24 years of imprisonment in a strict regime penal colony. Note that according to the publication of The Project, during his career, Klubkov passed 26 criminal convictions and not a single acquittal.

On February 10, 2020, a trio of judges from the Volga District Military Court, chaired by Judge Klubkov, sentenced seven Penza left-wing political activists in the Network (Set’) case. They were all convicted of creating a terrorist organization. Dmitry Pchelintsev was sentenced to 18 years in prison, Ilya Shakursky to 16, Arman Sagynbaev to six, Andrei Chernov to 14, Vasily Kuksov to nine, Mikhail Kulkov to ten, Maxim Ivankin to 13 years in prison. The investigation and the court considered Dmitry Pchelintsev and Ilya Shakursky to be the organizers of the terrorist community. The rest, according to investigators, participated in the community. The defendants alleged ill-treatment and torture during the investigation.

Defendants in the case, young people - left-wing activists, anti-fascists and anarchists, keen on airsoft - were accused of creating the terrorist organization Network (Set’). According to investigators, they created cells in Penza, St. Petersburg, Moscow and Belarus to carry out terrorist attacks before the presidential elections in Russia and the World Cup, and thereby “rock the masses to further destabilize the political situation in the country,” and when “the hour H” will come, supposedly to raise an armed rebellion. Many of them said that they testified under torture or the threat of torture.

The “Network” case demonstrated the drift of the Putin regime towards outright totalitarianism. The fictitious “terrorist organization,” confessions obtained after cruel tortures, huge imprisonment terms for a few meetings, and airsoft training. All of this recalls the infamous Stalinist trials against numerous “counter-revolutionary, spy, and terrorist organizations.” The impudent omnipotence and impunity of state security agencies remind us of the dark history of fascist regimes. The fate of those unfortunate, exhausted young people who will have to spend their best years in jail discredit the idea of a “hybrid” nature of the Putin regime and the hopes for its peaceful and evolutionary transformation.