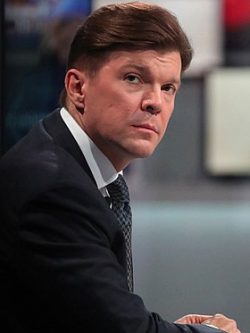 TV presenter, Deputy General Director — Head of the Directorate of Information Programs — a member of the Board of Directors of Channel One.

KLEIMYONOV, Kirill Alexeyevich (b. 1972 in Moscow) began working in the media right after high school: in 1990, he was a publishing editor on the USSR State Radio and Television broadcasting. Since 1992, he worked at radio stations Radio 101 and Rox, he was the host of information and music programs. At the same time, he was a correspondent for Interfax. In 1993, he became editor of international information on the Teleutro program on Ostankino’s Channel 1, then became the host of the Chronicle of the Day section of this program. In 1994, he graduated from the Romano-Germanic department of the Philological Faculty of Moscow State University.

From 1997 to 2004, he was the presenter of information programs (Novosti and Vremya) on the ORT channel (Channel One). From May to November 2004, he held the post of Deputy Head of the Department of Public Relations, Press Secretary of the President of Lukoil. Since November 2004, he has been Director of the Directorate of Information Programs, Deputy General Director, member of the Board of Directors of Channel One OJSC (since 2016). Since 2013, he has been a Member of the Council for the Prizes of the Government of the Russian Federation in the field of mass media. In 2018, he worked as a host of the Vremya newscast on Channel One.

Active long-term complicity in the legitimation and propaganda of the Putin regime.

The main basis for Kleimyonov’s accusation is the official position of the head of one of the largest state-controlled Russian media holdings, which has been actively used for propaganda purposes for many years, as well as personal participation in propaganda activities as a presenter.

Information broadcast of the Channel One under the leadership of Kleimyonov became one of the most important tools for outreach to acts of international aggression by the Russian regime and crimes against humanity, including the war with Georgia, the occupation and annexation of Crimea and military operations in eastern Ukraine, the MH-17 downing, the assassination of Litvinenko, the attempted poisoning of the Skripals, etc.

There is a popular opinion about the special role of Channel One and its leadership, who are allowed a little more freedom. According to the majority of independent media analysts, this is a deliberate decision of the authorities, which aims at a wider reach of the audience and the implementation of more subtle and sophisticated propaganda tools, in contrast to the aggressive methods implemented on NTV, VGTRK, etc. channels.

Kleimyonov, both as the head of the channel and as the TV presenter, for many years worked out all the propaganda orders of the authorities to form public opinion on key issues of foreign and domestic policy. Kirill Kleimyonov has established himself as an ardent fighter with the “enemies of Russia,” a whistle-blower of the “machinations of the West” and one of the most prominent Ukrainphobes. In 2014, he approved the annexation of Crimea, in October 2018, he intimidated the public by the inevitable war due to the split of the Orthodox Church. He repeatedly voiced the propaganda cliché: “The Ukrainian state is an oxymoron. The combination of incongruous. It’s like “hot snow.” Commenting on the Skripal poisoning scandal in March 2018, Kleimyonov issued a “warning to the traitors of the Motherland.”

Kleimyonov bears personal responsibility for the formation of a tough authoritarian regime led by Putin in Russia. He never concealed his devotion and he enjoyed reciprocal trust. Back in 2001-2003, he worked as a moderator of telephone calls during the so-called “Direct lines with Vladimir Putin”, in 2013-2015 and 2018, he was its main anchor (paired with Maria Sittel and Andrei Kondrashov).

Kleimyonov repeatedly showed intolerance towards the opposition. So, on April 12, 2018, he described the participants of the Free Russia Forum as “a psychiatric society suffering from a depressive form of hatred of Russia.”

Indirect evidence of Kleimyonov’s complicity in the crimes of the Putin regime is his receipt of the highest state awards, including the Orders of Friendship, Honor, and For Merit to the Fatherland. About sixty employees of Channel One received state awards in 2014 for covering the annexation of Crimea in the light favorable to the Kremlin.