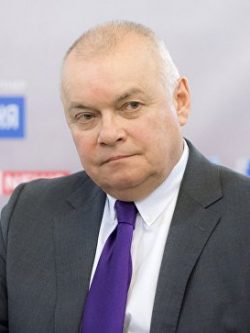 KISELEV (KISELYOV), Dmitry Konstantinovich (b. 1954) is a notorious Russian propagandist, news anchor, the head the government-owned international news agency Rossiya Segodnya (Russia Today) and deputy director of VGTRK government-owned broadcasting holding. After graduation from the Leningrad State University in 1978, he worked at the Central Radio Broadcasting for Foreign Countries in the Norwegian and Polish editorial offices. Since April 1989, he worked for the Central Television of the USSR as a correspondent for the Vremya (Time) information program and as the TV host at the Central News Service. Throughout the 1990s and early 2000s, he was the host of talk shows and analytical programs on a number of Russian and Ukrainian TV channels. In July 2008, he was appointed Deputy General Director of the VGTRK broadcasting holding. Since September 9, 2012, he has been the host of the Vesti Nedeli (News of the Week) program. On December 9, 2013, Kiselev became CEO of the Rossiya Segodnya (Russia Today) news agency.

He is accused of active participation in aggressive state propaganda of the anti-democratic regime, in the dissemination of fake news, instilling aggression, an atmosphere of fear, hatred, and xenophobia in Russian society. Being the head of the largest state media organization and the news anchor on a federal TV channel, he openly demonstrates homophobic and xenophobic views. Here are just a few examples. On April 4, 2012, Dmitry Kiselev called for “burying or burning” the hearts of gay people who died in road accidents, referring to a “global experience.” On February 16, 2014, Kiselev attacked the poet Igor Irtenyev and writer Viktor Shenderovich, critical of the current regime, emphasizing their Jewish origin. On March 16, 2014, in the Vesti Nedeli show, Kiselev stated that “After all, Russia is the only country in the world that is truly capable of turning the USA into radioactive dust.” This announcement caused a wide outrage both in Russia and abroad. In May 2014, at the presentation of the Ukraina.ru propaganda website, Kiselev stated that “There is no Ukraine. This is a virtual concept, a virtual country, and a failed state.” In 2016, he used fake documents when trying to demonstrate “widespread” support for Nazis in Ukraine. According to The Economist, “The new propaganda, exemplified by Mr Kiselev, seeks to agitate and mobilise the audience, to stir hatred and fear. <…> It is close in style to Orwell’s two minutes’ hate, stretched to more than 30.”