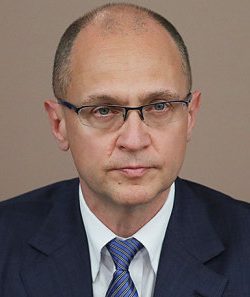 KIRIYENKO, Sergey Vladilenovich (b. 1962 in Sukhumi) is a Russian politician who served as the Prime Minister of Russia in March-August 1998 under President Boris Yeltsin. A grandson of Yakov Israitel, who was a devoted communist and member of the Cheka death squad, graduated from the Gorky Institute of Water Transport Engineers in 1984. The same year, he joined the Communist Party. Then, he worked as a foreman at the Krasnoye Sormovo shipyard. In 1986-1991, he was the secretary of the Komsomol committee of the shipyard, the first secretary of the Gorky regional committee of the Komsomol. In March 1990, he was elected to the Gorky Regional Council of People's Deputies.

In 1991-1997, he was in business. He served as General Director of AMK Concern, Chairman of the Board of Garantia Bank, President of NORSI-OIL Oil Company. From 1993 to 1996, he was a member of the Presidential Council on Industrial Policy and Entrepreneurship. In 1997, Kiriyenko was appointed First Deputy Minister, and then Minister of Fuel and Energy of the Russian Federation. On March 23, Kiriyenko was appointed Acting Head of the Government of the Russian Federation, and in April 1998. In August of the same year, he was dismissed along with the entire cabinet after the financial crisis hit Russia.

In December 1998, he headed the All-Russian Public Political Conservative Movement Novaya Sila. In 1999, he became co-chair and leader of the Union of Right Forces election bloc. In December of the same year, he was elected to the State Duma, where he became the leader of the Union of Right Forces faction. He was also the chairman of the State Commission for Chemical Disarmament. In 2000, he was appointed plenipotentiary of the President of the Russian Federation in the Volga Federal District. In 2005, he became the head of the Federal Atomic Energy Agency. Since December 2007, he was the Director-General of the State Atomic Energy Corporation Rosatom. On October 5, 2016, he was appointed First Deputy Head of the Presidential Administration.

Complicity in the unconstitutional coup and usurpation of power, managing the main state body that determines the internal policy of the Putin regime in Russia (Presidential Administration), manipulating public opinion, political parties, and public organizations, organizing large-scale rigging in the presidential elections in 2018.

Kiriyenko came to work in the Presidential Administration on October 5, 2016, about a year and a half before the 2018 presidential election in Russia. He was the one charged with the burden of preparing for the elections, which Putin was supposed to win with a result of at least 70% of the vote while maintaining the appearance of political competition. Kiriyenko coped with the task. Under his control, the elections were fairly calm, and Vladimir Putin won a landslide victory with 76.69% of the vote. At the same time, that was the illusion of competitive elections as several candidates ran for president, supposedly representing different spectra of the political field: Pavel Grudinin from the Communist Party, Sergey Baburin from the “patriotic” forces, Vladimir Zhirinovsky from the LDPR, Ksenia Sobchak, as a “liberal,” Maxim Suraikin from the far-left Communists of Russia, Boris Titov from the “pro-business” Party of Growth and Grigory Yavlinsky from social-democratic Yabloko.

A characteristic feature of the presidential election under Kiriyenko was the prohibition to run for the main opposition candidate, Aleksey Navalny, who announced his intention to run for president of the Russian Federation on December 13, 2016.

Besides holding the presidential election in 2018, Kiriyenko is responsible for the entire domestic political block of issues, including elections at all levels, interaction with political parties, public organizations, and youth politics. The Department of Internal Politics and the Department of Public Projects are subordinate to Kiriyenko; he also oversees online publications and social media.

Thus, Kiriyenko personally runs the entire system of “managed democracy” in Russia, where imitation political parties and public organizations operate and also oversees all Putin’s propaganda on the Internet.