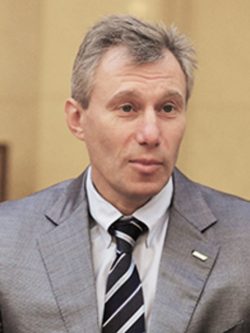 KHAN, German Borisovich (b. 1961 in Kyiv) graduated from the Moscow Institute of Steel and Alloys (MISiS) in 1988. After graduation, Khan began working in cooperatives Poisk and Kosmos. Then, together with partner Alexander Furman, he created his cooperative Alexandrina, which was engaged in apparel sewing. In 1989, Khan met with another MISiS graduate, Mikhail Fridman, who by then had a Soviet-Swiss joint venture, Alfa-Eco. Khan joined him and became engaged in wholesale and export. In 1995, Khan became director of the Alfa-Eco Raw Materials Department. In 1996, he took over as president of Alfa-Eco.

In June 1999, Khan tried to enter politics. He was elected a member of the political council of the Interregional Socio-Political Association Yugra (political bloc All Russia). The political council of Yugra also included the heads of the territorial divisions of all energy companies operating in the Khanty-Mansiysk District. In August 1999, the All Russia bloc merged into the electoral bloc Fatherland-All Russia (OVR) led by Yevgeny Primakov and Yuri Luzhkov. Besides supporting the Luzhkov-Primakov movement, the main function of Yugra was the financing of a new political force. All Russia ceased to exist at the end of 2001, merging into Unity, and Ugra, which gradually lost its position, became one of many movements that actively supported Vladimir Putin and the party in power.

In 2000, he took the position of Deputy Chairman of the Management Board, as well as Executive Director of TNK. In the same year, he joined the Board of Directors of ONAKO OJSC, Orenburgneft, in June 2001 - OJSC KIB Alfa-Bank, and in February 2003 - Slavneft. In 2003, after the merger of TNK with British Petroleum assets, German Khan became the executive director of the new TNK-BP company, as well as the executive director and member of the Board of TNK-BP Management. In 2013, after the purchase of TNK-BP by Rosneft, Khan left the company.

The first suspicions of illegal activity by German Khan were raised by journalist Oleg Lurie in 1999 based on a request from the Chairman of the State Duma Security Committee Ilyukhin on the audit of the activities of Alfa-Bank and Alfa-Eco. Khan-led Alfa-Eco was suspected of carrying out drug-related operations. The Moscow Arbitration Court, however, found the disseminated information untrue and discrediting its business reputation.

In 2003, State Duma member Vladimir Yudin requested that the Prosecutor General give a legal assessment of the actions of TNK management. Yudin reported that the District Court of the Southern District of New York held a lawsuit against the heads and owners of TNK. Besides the president of TNK, Semyon Kukes, Leonard Blavatnik, Viktor Vekselberg (managers and owners of Renova Inc.), Joseph Bakaleinik (first vice president of TNK), German Khan (TNK executive director) appeared in the case. They were charged with money laundering, illegal money transactions, extortion, and threats of physical harm.

In 2005, the International Union of Veterans of the Armed Forces and Law Enforcement Agencies issued a brochure, “Criminal Law Assessment of the Activities of Alfa Group.” The authors of the brochure convicted Mikhail Fridman, Alexei Kuzmichev, German Khan (co-owners of Alfa Group), Leonard Blavatnik and Viktor Vekselberg (co-owners of Access Industries and Renova) in “fraudulently seizing a 40% stake in TNK, using transfer prices, tax evasion, as well as fraudulent control over Nizhnevartovskneftegaz and the artificial bankruptcy of Chernogorneft.”

In 2012, the former head of the TNK-BP logistics department, Igor Lazurenko, accused the director of TNK-BP, German Khan, of bribing officials. In a London court, Lazurenko said that Khan was one of the corrupt officials and accused him of “bribing senior government officials and illegally transferring hundreds of millions of dollars.”

German Khan as a co-owner of Alfa-Bank is also mentioned in the so-called Russian dossier on Donald Trump, published by BuzzFeed in 2017. The dossier stated that Fridman, Aven, and Khan are close to Putin. Businessmen tried to accuse the author of the dossier of defamation in the American court but to no avail.

In January 2018, German Khan was included in the Kremlin list by the US Treasury along with other well-known Russian businessmen.

These Reports Allege Trump Has Deep Ties To Russia