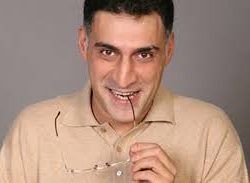 KEOSAYAN, Tigran (b. 1966 in Moscow) graduated from the directing department of the All-Union State Institute of Cinematography in 1990. Since 1987, he starred in movies, and in 1992, he made his first full-length film. In the 1990s, he shot music videos and commercials. In the late 1990s, he returned to filming movies.

Since 2007, Keosayan has been a TV presenter. From March 2007 to November 2009, he was the host of the Evening with Tigran Keosayan talk show on REN-TV, then, from 2009 to 2010, he hosted the TV show You and Me on the Rossiya TV channel with his ex-wife, Alena Khmelnitskaya. At the same time, he became the executive director at the DTV channel (later Perets), where he hosted the Hot Evening with Tigran Keosayan talk show. He was a jury member of numerous entertainment TV shows. In 2011, he led the hosted the show “Stop Being Silent!” On REN-TV. Over the next five years, he focused on the production of films at his studio GoldVision.

Since September 2016, he has been hosting the propaganda-satirical program Mezhdunarodnaya Pilorama (“International Sawmill”) on NTV channel. In 2018, he shot the propaganda movie Crimean Bridge for the federal budget money. Since 2012, she has been married to Margarita Simonyan, editor-in-chief of the RT channel, the Russia Today International News Agency since 2013, and the Sputnik news agency.

A mediocre director kindly treated by TV producers, Keosonyan discovered himself in a new role as an unbridled court jester in 2016, whose show on the federal NTV channel surpassed the worst examples of vulgarity and bad taste of other Russian propagandists. While his wife is seasoning Russian state propaganda with a facade of respectability, Tigran openly demonstrates the primitive mindset of the Russian “elite” and drowns the intellectual level of Russian state television even deeper.

In his program “International Sawmill,” Keosayan shamelessly insults those whom he considers critics and enemies of the Kremlin, and also openly glorifies Vladimir Putin. He calls activists of the Russian opposition boors and tantrums. Of course, a significant part of the broadcast is about mocking Ukraine. Examples: “Belarus has become so pitiful that it sent toilet paper to Ukraine. I am not kidding. Humanitarian aid included toilet paper. First, fellow citizens, let's congratulate Belarus, the country has finally found someone poorer than itself. As the saying goes, what you’re rich in, so you use for wiping up. 8 thousand rolls! Even Belarus realized that Ukraine was an asshole!” “Ukraine has a temporarily unusable army. The maximum it can do is to stain or scratch the bridge.” “But, being in the ass, there are two ways: to get out of it or to get deeper” (about Ukraine).

For mysterious reason, Keosayan’s “favorite” is French President Emmanuel Macron: “The French President nervously straightened women’s underwear under his shirt,” “At a press conference, Putin stood behind the tribune with an eagle, but they did not stick the rooster on Macron’s tribune but everything is clear” (a rooster has a gay connotation in Russian culture); “Back in school,” Keosanyan tells us about Macron, “he realized that being a married gay-gerontophile is more elegant than a banal gay;” “It's a pity we didn't annex you [France] in 1814. Paris would have been ours. We would have held a polite referendum...” Putin thought according to Keosayan. “He could, of course, stab him with a knife, as he had learned on the Leningrad streets. But Putin is not vindictive, he will take revenge and forget.”

Surprisingly, the propagandist Keosayan adores the toilet topic: “Because of anti-Russian sanctions, Americans literally shit. American sanctions imposed on the Russians this week paralyzed the toilets in the administration building of the National Alley Park. We thought that only we wanted to shit on American sanctions, but as it turns out, the Americans also wanted to shit, but they could not do it for two whole weeks. The company, a manufacturer of pumps for toilets, was subject to sanctions, which prevented to repair the toilets on time...” “Do you know how’s “baby” in Estonian? Mudila (asshole). And their best-selling children's book was Spring and Poop”.

In 2018, Keosayan with his new wife shot the film Crimean Bridge on taxpayers' money (300 million rubles were allocated for the film without competition). The film resembled the spirit of Stalinist propaganda about the happy inhabitants of the country. It is worth noting that the movie advocates for the Stalinist deportations of the Crimean Tatars in 1944 and gives a positively romantic image of the Soviet dictatorship and Putin's annexation of Crimea. However, the movie received devastating ratings and reviews from critics and viewers, collecting only 70 million rubles at the box office. Keosayan and Minister of Culture Medinsky accused the attack of bots of the movie’s fail.

Keosayan jumped on the bandwagon of Putin’s propaganda at the time when it became completely vulgarized and reached the lowest degree of moral decay. It seems that easy budget money can completely deprive a person of conscience and connection with reality. Sooner or later this money fountain will end, but the evidence of participation in the most shameful propaganda will remain. What funny story will he tell then?