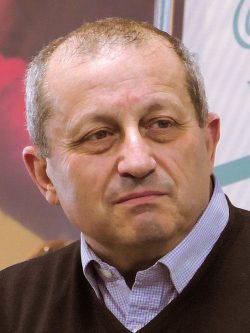 KEDMI, Yaakov (b. 1947) is a former director of the Israeli secret service Nativ. Born in Moscow, he studied at the Moscow Institute of Transport Engineers. He became famous for passing through a police guard on February 19, 1967, and entering the Israeli embassy in Moscow, where he applied for repatriation. Israeli diplomats refused because they considered him a KGB agent. Yaakov repeated his action several more times before receiving consent from Israel for repatriation. In May 1968, he publicly renounced Soviet citizenship and in February 1969, received permission to emigrate. In those days, Soviet authorities issued only a few leave permits and only for the family reunification. However, Yaakov had no relatives in Israel. Given the fact that he was not prosecuted for his open anti-Soviet expressions, he could indeed collaborate with the KGB.

In Israel, Yaakov Kedmi continued his studies at the Haifa Technion, Tel Aviv University and College of National Security. He served in the Israeli army, where he met the future Prime Minister Ehud Barak. Together, they took part in the Yom Kippur War of 1973. After the war, he worked at Sohnut, an organization involved in the repatriation of Jews to Israel, and was its representative in Vienna. He also held various positions in the Israeli Foreign Ministry. He was a member of the Herut party, and in 1978, on the recommendation of the party’s leader and Prime Minister Menachem Begin, he joined Nativ, a special service that transported Eastern Bloc Jews to Israel, often by illegal methods. In 1988-1990 he was an employee of the Israeli Foreign Ministry consular group at the Embassy of the Netherlands in Moscow. In 1992, Yitzhak Shamir, Begin's successor and the head of the government, appointed Kedmi the director of Nativ.

Between 1997 and 1999, Kedmi’s relationship with Prime Minister Netanyahu deteriorated sharply. Nativ got involved in several corruption scandals and Netanyahu intended to disband the organization. Finally, Nativ was deprived of the special status, and Kedmi resigned.

Сollaborating with the Putin regime and participating in Kremlin TV propaganda.

In the 2010s, Kedmi became a regular participant in propaganda shows on Russian TV. He plays the role of the “useful Israeli” and uses his status as the former head of an Israeli secret service. His statements completely match with the most controversial claims of Russian officials and propagandists.

So, in May 2018, Kedmi urged Russia to start a war with the United States in the “Sunday Evening with Vladimir Solovyov” show. “They [USA] are training in Iran. They will implement everything that is being used in Iran against you! Everything that is being done in Iran awaits Russia”... “There is a total war going on against you,” Kedmi said in a hypnotist's voice, “Americans are afraid of only one thing, a military confrontation with Russia!” exclaimed Kedmi, and then demanded Russia almost directly attack America: “You allowed Georgia to take its course and you got Ukraine. You allowed Ukraine to take its course and got Armenia! So where are you going to stop them?!”

In November 2016, Kedmi defended Stalin in Solovyov’s show. “Stalin was the last statesman to take care of his country,” he said. He developed his thought: “There was nothing like that after him. Stalin was the only one who cared about Russia. If there had been another leader, there would have been no Russia”.

In his speeches, Kedmi invariably defends the Kremlin's point of view on foreign policy, advocates for Russia's even greater involvement in the Syrian conflict, and accuses Israel of provoking a conflict with Russia in the Middle East. Yaakov Kedmi regularly criticizes Ukraine, accuses the Ukrainian leadership of Nazism, and Ukrainian society of anti-Semitism, using expressions such as “Maidan bastards”. After the Russian attack and the seizure of Ukrainian ships by the Russian military in the Kerch Strait, Kedmi said there was a certain “red line” in relations between Russia and Ukraine, “and if Ukraine moves on, there will be no more such an independent state”.

Why Putin feels at home in Israel

A surprise win for the US on Russian state TV

Yakov Kedmi: Russia Is Too Lenient! Time to Take Tougher Stance Against Russophobia!

Yakov Kedmi: Sanctions Always Precede Actual War! No Getting Away From it Now!