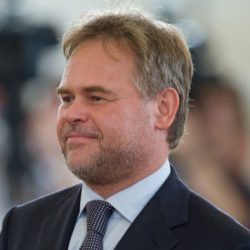 KASPERSKY, Evgeny (Eugene) Valentinovich (b.1965) is a Russian cybersecurity expert and the CEO of Kaspersky Lab, an IT security company. He was born in the city of Novorossiysk and in 1987 he graduated from the Technical Faculty of the KGB Higher School. In 1987, he joined the Research Institute at the USSR Ministry of Defense. In 1991, Kaspersky began working at the KAMI Information Technology Center, where he led a group of specialists involved in the development of antivirus solutions. In 1997, Kaspersky and his colleagues set up their own company, Kaspersky Lab where he managed security research. In 2007, Evgeny Kaspersky became the CEO of the company.

Meddling in the affairs of a foreign state, corruption ties with representatives of the Russian secret security services, spying.

Kaspersky's prior education at a KGB-sponsored technical college and direct work for the Russian military led to reasonable grounds for the assumptions of his use of the position to the interests of the Russian government. This is confirmed by several other facts.

In March 2015, Bloomberg published an article that says that since 2012, Kaspersky’s ties with Russian special services have increased dramatically, and “people with close ties to the Russian military or intelligence agencies” have come to key managerial posts in the Laboratory. According to Bloomberg, Igor Chekunov, deputy head of the company for legal issues, had previously worked in the KGB and then served in the police. Already at Kaspersky Lab, Chekunov actively participated in the joined projects with the FSB, including those related to the collection of users’ data. Apart from Chekunov, the top management of the company includes Executive Director Andrei Tikhonov (military intelligence lieutenant colonel) and the head of the security service Aleksey Kuzyaev (former FSB officer).

Kaspersky was less aggressive about identifying cyberattacks originating from Russia than from other countries. Thus, he allegedly ignored Russian-based spyware called Sofacy, which is believed to have been used by Russia against NATO and Eastern Europe.

In May 2017, the US National Security Agency director Mike Rogers told that the NSA has serious suspicions that Russian intelligence services use Kaspersky software to conduct spy operations or launch cyberattacks against American digital infrastructure. The FBI investigated that matter. In July 2017 President Trump signed the legislation to ban Kaspersky software on government computers. US government institutions were prohibited from buying and installing Kaspersky software on their computers and other devices. Kaspersky is one of the Russian oligarchs and officials named in the Countering America's Adversaries Through Sanctions Act, CAATSA, signed into law by President Donald Trump in 2017.