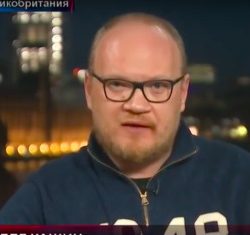 Russian journalist and blogger. The host of the Kashin.Guru program on TV Rain and the op-ed contributor to the Republic. Member of the Opposition Coordinating Council (2012).

KASHIN, Oleg Vladimirovich (b. 1980 in Kaliningrad) graduated from the Baltic State Academy of the Fishing Fleet in 2003. In 2001-2003, he was a special correspondent for Komsomolskaya Pravda in Kaliningrad. In 2003–2005, he worked as a correspondent of the Kommersant Publishing House in Moscow. From 2005 to 2009, he collaborated with various media: he worked as a special correspondent for the Izvestia newspaper, a columnist for the Expert magazine, the author of the Russian Journal, the youth newspaper Re:Aktion, the tabloid Tvoy Den, the magazines Medved and Medved Big City, hosted the Black and White program on the O2TV channel.

In April 2007, he became Deputy Chief Editor of Russkaya Zhizn magazine. From 2009 to 2012, he again worked for the Kommersant Publishing House. On November 6, 2010, Oleg Kashin was severely beaten by unknown persons near his home. It's believed that the attack’s paymaster was the then governor of the Pskov region Andrei Turchak, who was offended by Kashin’s publication on the LiveJournal. In May 2013, he moved to Geneva. From time to time ha returned to Russia, wrote for the online media such as Slon, Colta, Svobodnaya Pressa, Sputnik&Pogrom.

In June 2015, he announced his return to Russia. In September 2015, he began hosting the Kashin.Guru program on TV Rain. In April 2016, he moved to London. Since 2017, he became the exclusive author of the Republic (online media). Since 2018, he has been a participant in the propaganda talk show 60 Minutes on the state TV channel Rossiya-1, later became a commentator on the state TV channel Rossiya-24. In 2019, he launched his broadcasts on YouTube.

Complicity in the propaganda of the Putin regime.

The basis of the accusation is his use of the status of a popular journalist to legitimize the aggressive neo-imperial policy of the Russian leadership, to promote the aggressive chauvinism. Kashin is one of the few “liberal” Russian journalists who openly supported the annexation of Crimea by Russia in 2014, becoming one of the most effective broadcasters of the propaganda formula “Crimea is Ours.”

Oleg Kashin: “The Russian Federation is shit and should be treated appropriately. It’s just that Crimea is Russian, and the Russian cellist [Roldugin, one of Putin’s “wallets”] on the ancient ruins [Palmyra] conquered by the Russian army is cool.” And further: “Timur Olevsky objects to me about Crimea and Palmyra, that the end does not justify the means, so I have been writing this since February 14, it does not justify, but whose Crimea is? Ours.”

In November 2018, Kashin made a few frankly insulting chauvinistic statements addressed to various ethnic cultures in the Personally Yours program on the Echo of Moscow radio station: “I can’t [imagine] that the great, respected and all such Bashkir people would able to prove to me their equality to my people, Russians, to all respect... It is foolish to deny that some people have made more contributions, others less, and the third are Ukrainians, sorry.”

In December 2018, Oleg Kashin made his first live broadcast at the main propaganda talk show 60 Minutes on the Russia-1 channel, where he sharply and ambiguously spoke out about the political prisoner Oleg Sentsov, who was imprisoned in Russia on false charges of terrorism. Kashin agreed with the position of official Russian propaganda, saying that “we are enemies for him, he is an enemy for us.” This episode provoked a heated discussion in the media. At the same time, the main complaint of the critics was the very fact of Kashin's complimentary participation in the propaganda show.

In January 2019, Kashin acted as an advocate of Yevgeny Prigozhin, criticizing the results of the investigation, that confirmed his involvement in the murder of a group of Russian journalists in the Central African Republic in July 2018.

In April 2019, he supported a provocative decision on the massive granting of Russian citizenship to Ukrainian citizens living in the occupied territory of Donetsk and Luhansk regions. In September 2019, Kashin said in an interview with Komsomolskaya Pravda that “A good Ukrainian calls himself Russian.”

Indirect evidence is Kashin’s constant public expression of sympathy and solidarity with “pleasant people” — the most rabid Russian propagandists Yevgeny Popov, Olga Skabeeva, and Margarita Simonyan, whom he considers his colleagues or even friends.