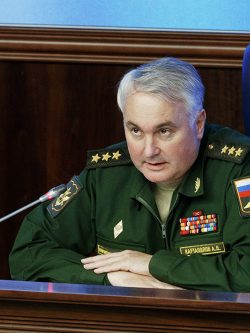 The beginning of his career is associated with military service in the Group of Soviet Forces in Germany (in 1989-1994 - the Western Group of Forces), then continued in the Far Eastern Military District. He served in positions from platoon commander to the commander of the 18th machine-gun and artillery division (Goryachy Klyuchi, Sakhalin region). In 2007-2008, Kartapolov was the deputy commander of the 41st Army in the Siberian Military District. From 2008 to 2009, he served as chief of staff - first deputy army commander in the Moscow military district. In 2009-2010, he became the head of the Main Operations Directorate of the General Staff of the Armed Forces of the Russian Federation.

Andrei Kartapolov is a participant in military conflicts. In December 2016 - March 2017, he commanded a group of Russian troops in Syria. Besides, in 2014, he took part in hostilities in Ukraine. In February 2021, the Security Service of Ukraine (SBU) accused Kartapolov of participating in the war against Ukraine. He was charged with encroachment on the territorial integrity and security of Ukraine (part 3 of Article 110 of the Criminal Code), waging an aggressive war (part 2 of Article 437 of the Criminal Code), and violation of the laws and rules of warfare in combination with premeditated murder (part 2 of Article 438 of the CC). According to the investigation, in August 2014, Kartapolov provided planning and management of Russian units during their invasion of Ukraine, participated in organizing the slaughter of Ukrainian soldiers near the city of Ilovaisk, and also ensured the subsequent armed occupation of other settlements of Donbas.

At the end of April 2021, he applied for participation in the primaries of the United Russia party, in which he won. In the scandalous and widely rigged 2021 Duma elections, he got a seat in the parliament. The media predict that in the State Duma, Kartapolov will become the head of the defense committee.

Participation in war crimes in Ukraine and Syria, falsifying testimony in the MH-17 downing case.

Kartapolov participated in fabricating evidence in the Boeing MH17 case. In July 2014, taking part in a press conference of the Ministry of Defense of Russia, he said that the means of radar surveillance of the Ministry of Defense of the Russian Federation recorded that shortly before the crash, the Su-25 aircraft of the Armed Forces of Ukraine was flying at a distance of 3-5 km from the Malaysian Boeing. According to statements published by the Bellingcat, a check carried out by international experts showed that the data provided by Kartapolov was specially fabricated and that no Ukrainian military aircraft were recorded in the vicinity of Boeing on the day of the crash.

Andrei Kartapolov was remembered not only for his war crimes but for his notorious statements.

Kartapalov spoke about the appearance of a mosaic panel depicting Joseph Stalin in a temple of the Armed Forces in the Moscow region, saying: “Stalin is our supreme commander in chief and chairman of the council of people's commissars, who bore the brunt of the war and made the most important decisions…” According to Kartopolov, “Stalin returned the religion,” and therefore the mosaic in the temple with the image of the leader is appropriate. Only “some gentlemen from beyond the hill” are ashamed of it

His words about a computer game sound no less absurd. Kartapolov called the game Metal Gear a project of the US intelligence services. “Projects of American special services, such as Graphics, Metal Gear, Echo of Runet, are widely implemented on the Internet, aimed at direct manipulation of public consciousness and, above all, of young people.” According to Kartapolov, with the help of these projects, the US special services form protest activity and discontent with the authorities among young people.

In February 2015, European Union included Andrei Kartapolov in the sanctions