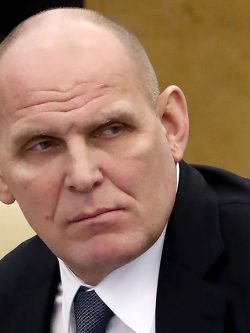 KARELIN, Alexander Alexandrovich (b. 1967 in Novosibirsk) was training in classical Greco-Roman wrestling from the age of 13, and already in 1985 he fulfilled the standard of the USSR Master of Sports of the international class. In the same year, Karelin became the world champion among youth. In 1985, he graduated from the Novosibirsk Motor Transport College and entered the Novosibirsk Higher Military Command School of the Internal Troops of the USSR Ministry of Internal Affairs. In 1986, Karelin was enrolled in the national team of the USSR. In 1988, he won his first gold medal at the Seoul Olympics. In 1991, he graduated from the Omsk Institute of Physical Culture and Sports. In 1992, he won his second gold medal at the Barcelona Olympics.

In 1999, the political career of Alexander Karelin began. In July 1999, he was appointed adviser for sports and physical education to Prime Minister Vladimir Putin. In December 1999, he was elected to the State Duma from the pro-Putin electoral bloc “Bear” (Unity). Since 2001, Karelin has been a member of the Supreme Council of the United Russia political party, formed by the merger of Unity and Fatherland-All Russia parties. In 2003, 2007, 2011 and 2016, he was re-elected to the State Duma from the ruling party. He was a member of the Duma Committee on Health and Sports and a member of the Commission on Geopolitics. In December 2007, he became a Member of the State Duma Committee on Foreign Affairs, and since September 2016, he has been a Member of the Energy Committee. On January 15, 2020, Vladimir Putin included Alexander Karelin in the working group on preparing proposals for amending the Constitution.

Former famous athlete Karelin has not been directly involved in sports for twenty years. However, as one of the founders and leaders of the United Russia party, he is directly involved in the usurpation of power in the country, the rejection of democratic standards, and the devolution of the soft authoritarianism of the first Putin years into a dictatorship of a personalistic type. Karelin participated in the initiation and adoption of several repressive laws, as well as in the constitutional coup in 2020, where he played the role of a smokescreen for the main purpose of the amendments, “nullification” of the presidential term of Vladimir Putin.

As follows from the official website of the State Duma, Alexander Karelin was the initiator of a few highly controversial bills. Among them are the tightening of article 228.1 of the Criminal Code of the Russian Federation (Illegal production, sale or transfer of narcotic drugs, psychotropic substances or their analogues, as well as illegal sale or transfer of plants containing narcotic drugs or psychotropic substances, or parts thereof containing narcotic drugs or psychotropic substances), the most massively used article of the Criminal Code of the Russian Federation; Federal Bill #121-FZ of 2012, which introduced the concept of an “NGO-foreign agent” and forced most independent NGOs to cease their activities in the Russian Federation; Federal Bill of December 28, 2012 #272-FZ (popularly known as the Bill of Scroundels), which prohibited US citizens from adopting Russian orphans as a response to the passing of the Magnitsky Act by the US Congress, which had introduced sanctions against human rights violators from the Russian Federation; Federal Bill “On Measures of Impact (Counteraction) on Unfriendly Actions of the United States of America and Other Foreign States,” which allowed the president to introduce counter-sanctions against “unfriendly countries and organizations”; as well as the highly unpopular pension reform of 2018.

On January 15, 2020, Putin appointed Alexander Karelin a member of the working group to prepare proposals for amending the Constitution of Russia. At a meeting of the Duma on the morning of March 10, 2020, MP Karelin suddenly came up with the idea that, after voting on amendments to the Constitution, parliamentarians would terminate their powers ahead of schedule, and early elections would be scheduled for September. But in the afternoon, Vladimir Putin appeared in the Duma, spoke out against early elections to the State Duma, and Karelin immediately withdrew his amendment. According to Sergei Obukhov, a doctor of political sciences and other experts, such a strange step was needed to divert attention from the MP Tereshkova’s proposal to “nullify” the previous presidential terms after voting for constitutional amendments and, thus, legalize a direct, life-long usurpation of power by Vladimir Putin.

As early as March 14, 2020, Putin signed the hastily drafted amendments. Besides “nullifying the terms,” they allow the Russian authorities to ignore the decisions of the European Court of Human Rights, introduce the concept of “internal threats” that the Security Council of the Russian Federation must fight, and also expand the powers of the president. They completed the constitutional and legal drafting of Putin's dictatorship and are regarded by the Free Russia Forum as an illegitimate and anti-democratic constitutional coup.