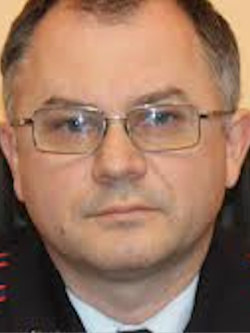 Minister of Internal Affairs for the Republic of Crimea, Police Lieutenant General.

Pavel Leonidovich Karanda was born on 02/10/1964 in Omsk. From 1981 to 1985 he did full-time training at the Omsk Higher Police School of the USSR Ministry of Internal Affairs.

In 2011, Karanda was appointed to the post of deputy chief of police (for operational work) of the Ministry of Internal Affairs of Russia for the Vologda region. In 2013, he became Deputy Head of the Russian MIA Administration for the Vologda Region, Chief of Police.

Aiding and direct management of the occupied territories of the annexed Crimea, in violation of the established norms of international law, including non-compliance with the territorial integrity of Ukraine.

In the leading positions of law enforcement agencies, Karanda Pavel Leonidovich directly controls the executive branch of the occupation administration of Crimea, bears direct responsibility for the violation of the territorial integrity of Ukraine, as well as for the systematic violation of human rights on the peninsula.

Human rights violations by the Ministry of Internal Affairs recorded by the UN in Crimea:

Administration of justice and the right to a fair trial
Russian law enforcement officers in Crimea, in particular police officers subordinate to Pavel Leonidovich Karanda, refused privately hired lawyers to meet with their clients, received incriminating statements or collected DNA samples from defendants when their lawyers were denied access. The access, as a rule, was closed from 3 to 17 hours. Cases have been documented in which law enforcement officials refused to admit that lawyers' clients were deprived of their liberty, prompting relatives of the victims and lawyers to file complaints about the abduction with the police and prosecutors. In most cases, there were complaints from lawyers that the FSB and the police allowed them to see their clients only after the occupation authorities received confessions, statements or evidence. Victims reported beatings, threats of physical and sexual abuse, and sleep and food deprivation in cases where food at regular intervals was medically necessary.

The right to life, physical and mental integrity, freedom and security.
UN reports record an increase in arbitrary arrests and detentions of members of religious minorities in Crimea; in the fifth report, OHCHR for the period from 1 July 2020 to 30 June 2021 recorded arbitrary arrests of 33 people (30 men and 3 women) in Crimea, which is an almost fivefold increase. compared to 7 arrested between 2019-2020. Of the total number of victims, 31 belonged to the religious minorities of Crimea (21 Muslims and 10 Jehovah's Witnesses). In at least 22 of these cases, at the time of arrest, neither the police nor the Federal Security Service informed those arrested of the reasons for their arrest or the charges against them. Besides, the victims complained about the unjustified and disproportionate use of force during the arrests, the planting of evidence by law enforcement agencies and the seizure of their Ukrainian passports.

According to information available to OHCHR, there has been no tangible progress in the investigation of 43 cases of enforced disappearance (39 men and 4 women) documented in Crimea since March 2014. Eleven people remain missing, 1 was reportedly summarily executed after the initial disappearance, 1 remains in an official detention facility, and 30 victims were released but received no compensation. The alleged perpetrators of abductions, incommunicado detention, incarceration in unofficial places of detention, concealment of the whereabouts of disappeared persons, torture and ill-treatment include the FSB, the Crimean self-defense forces and the local police. So far, no arrests have been made, although there were 28 disappearances in 2014.

OHCHR documented numerous reports of arbitrary arrests, usually preceded by police and FSB raids and searches. From 1 January 2017 to 30 June 2019, OHCHR registered 186 searches, 140 of which involved Crimean Tatars' homes, private businesses or gatherings. In almost all cases of arbitrary arrest recorded by OHCHR, the “authorities” in Crimea and the Crimean Self-Defense Forces allegedly resorted to torture and ill-treatment and extracting false confessions.

Freedom of peaceful assembly and freedom of association.
In Crimea, public assemblies that express a public position that differ from the position of the occupation authorities are prohibited and suppressed. Police officers intimidate the organizers of assemblies and participants in public actions; they are given “warnings,” which describe possible sanctions for participation in future unauthorized protests. The police are arresting participants in events “not coordinated” with the authorities, for example, on January 23, 2021, dozens of people were detained, participants in the rally in support of Alexei Navalny. In the following weeks, residents of Simferopol were also stopped in the streets and brought in for interrogation on the days when opposition protests were taking place in the Russian Federation, although no such actions were held in Simferopol during this period.

The UN report provides an example of a case where a married couple took part in a protest against the Russian government and corruption on January 23, 2021. During the rally, the police arrested her husband and detained him at the police station for five hours. Police in vague terms told the man that they had arrested him for participating in an unsanctioned rally, but he was later fined for an administrative offense related to COVID-19 prevention rules. In the weeks that followed, both the wife and husband were arrested two more times while walking down the street at a time when no rallies were taking place, and were taken to the police station for questioning. During the woman's second arrest, the police threatened her, talking about the “problems” she will face at the university where she is studying. In April 2021, before another opposition rally, a woman was detained for five days for an “extremist” video on her social media page. Opposition activists called this arrest a “method of intimidation” and a means of forcing people to refuse to participate in further actions.

In a similar way, the department headed by Karanda Pavel Leonidovich persecutes all activists who disagree with the position of the occupation authorities, for example, the Crimean Tatars and eco-activists.

On April 15, 2021, the US Treasury Department issued a Property Freeze Order in respect of the said harmful foreign activity of the Government of the Russian Federation, signed by the President of the United States. The published list of individuals and legal entities, in particular, includes Pavel Leonidovich Karanda.