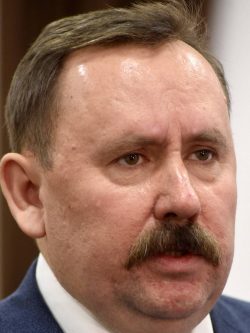 Director of the Federal Penitentiary Service (FSIN) since October 2019.

Alexander Kalashnikov was born on January 27, 1964, in the city of Tatarsk, Novosibirsk region. He graduated from the Novosibirsk Higher Military Command School in 1985. In the summer of 1985, Lieutenant of the Internal Troops Kalashnikov was appointed platoon commander of the 236th escort regiment of the 36th convoy division of the USSR Ministry of Internal Affairs. A year later, the unit would be called the Central Directorate of Internal Troops. In 1988, he graduated from the Higher Courses of Military Counterintelligence of the KGB of the USSR in Novosibirsk and became a KGB operative serving a convoy regiment. In 1995, Alexander Kalashnikov graduated from the Academy of the FSB of Russia in Moscow. Until 1996, he served as a counterintelligence officer at various units of the internal troops. For about five years he worked in the "M" department of the FSB of Russia, which oversees the law enforcement agencies, and was the deputy head of the department. Then he worked in the Control Service of the central office of the FSB.

From 2011 to 2017, Alexander Kalashnikov headed the department of the FSB of Russia in the Komi Republic. At this time, the republic was headed by Vyacheslav Gaizer. In September 2015, the Investigative Committee of Russia opened a criminal case against Gaizer and a group of others under the article on fraud and organizing a criminal community. According to Moskovskiy Komsomolets sources, Kalashnikov assisted the Investigative Committee in the arrest of Gaizer and members of his team. In 2019, Gaizer was found guilty and sentenced to 11 years in a strict regime colony and a fine of 160 million rubles. Kalashnikov also initiated the arrest of the head of the Komi Federal Penitentiary Service, Lieutenant General Alexander Protopopov. In 2017, the court found Protopopov guilty of accepting a bribe. He was sentenced to seven years in prison in a maximum-security penal colony and a fine of 1.875 million rubles.

In May 2017, Kalashnikov was appointed head of the FSB of Russia for the Krasnoyarsk Territory. On October 8, 2019, he was appointed director of the Federal Penitentiary Service (FSIN). Has the rank of lieutenant general.

On November 25, 2021, by Putin's decree, Kalashnikov was relieved of his post as head of the Federal Penitentiary Service. The reason for Kalashnikov's dismissal was apparently a torture scandal in the penitentiary system that erupted after the publication by the human rights project Gulagu.net of a series of videos showing torture and humiliation of prisoners at Tuberculosis Hospital No. 1 of the Federal Penitentiary Service Directorate in the Saratov Region.

Leading one of the main punitive government bodies of Putin's Russia.

Alexander Kalashnikov was appointed head of the Federal Penitentiary Service to replace Gennady Kornienko, who headed the department for eight years. Kornienko's predecessor, Alexander Reimer, in 2017 was sentenced to eight years in prison for embezzling almost 3 billion rubles allocated from the budget for the purchase of electronic bracelets. Under Kornienko, one of the most corrupt agencies in the country continued to find itself in corruption scandals, as well as numerous cases of torture, beatings, and humiliation in penal colonies. In 2019 alone, the Federal Penitentiary Service was forced to conduct inspections of its own employees several times. It should be noted that Russia is the leader in terms of deaths in prisons in Europe. The FSIN in Putin's Russia is an almost inexhaustible market for state contracts and a resource of cheap forced labor.

The founder of the portal Gulagu.net Vladimir Osechkin notes that Kalashnikov, like Kornienko, is a “Chekist officer” who served in the KGB of the USSR. He believes that fundamental changes in the FSIN should not be expected: there will be neither a toughening of the regime for keeping prisoners nor humanization. FSB officers, where Kalashnikov came from, have unhindered and uncontrolled access to all FSIN institutions and regularly use this right to put pressure on suspects and prisoners using torture methods (a striking example is the “Network” (Set’) case).

Despite his statements about reforms in the department and good intentions to limit the use of methods that humiliate human dignity, Kalashnikov remains faithful to the traditions of the Gulag. So, in September 2020, it became known that prison labor would be used in the construction of a mining and metallurgical complex for processing titanium ores and quartz sands of the Pizhemskoye deposit in Komi. Then, in September 2020, convicted Russian public figure and nationalist Maxim “Tesak” Martsinkevich died in jail #3 of Chelyabinsk under mysterious circumstances. An independent examination confirmed the presence of traces of cruel torture.

On March 2, 2021, the US authorities announced the introduction of personal sanctions against a number of top Russian officials, including the current head of the Russian penitentiary system, Alexander Kalashnikov.