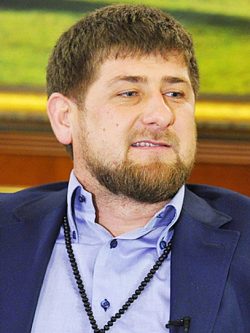 KADYROV, Ramzan Akhmatovich (b.1976) is the current Head of the Chechen Republic since February 15, 2007. The son of the first pro-Kremlin president of the Chechen Republic, Akhmat Kadyrov. During the First Chechen War (1994-1996), along with his father fought against the Russian Armed Forces. After the First Chechen War, he served as a personal bodyguard for his father, the mufti of Ichkeria, Akhmat-Hadji Kadyrov, one of the leaders of the separatist movement in Chechnya, who declared a jihad against Russia. In the fall of 1999, together with his father, he sided with the federal authorities. When Akhmat Kadyrov became the head of the interim administration in 2000, Ramzan headed the father’s security service. In 2003, after the election of his father as president of Chechnya, Ramzan Kadyrov became the head of the presidential security service. On May 10, 2004, the day after the assassination of his father, he was appointed First Deputy Prime Minister of the Chechen Republic. In March 2006 he headed the Government of Chechnya. On March 2, 2007, the Chechen parliament approved Putin's nomination of Kadyrov as Chechen president.

Ramzan Kadyrov is accused of establishing a dictatorial regime in the Chechen Republic, numerous violations of human rights, torture, forced disappearances and murders of his opponents, as well as Putin’s opponents in Russia.

As the leader of the Chechen Republic, Ramzan Kadyrov acted in the interests of the Russian authorities, killing or intimidating its opponents. Human Rights Watch has repeatedly accused Kadyrov of numerous human rights violations, war crimes and crimes against humanity: extrajudicial killings forced disappearances and torture. These actions are carried out by the “Kadyrovtsy” — the personal guard of Ramzan Kadyrov, recruited from former militants who fought against the Russian army. Human rights advocates also accuse Kadyrov of practicing “collective responsibility” in Chechnya against the relatives of the anti-Kadyrov militants whose houses are being set to fire. In addition, Kadyrov supposedly created a number of secret prisons in Chechnya to incarcerate opponents of the Kadyrov regime. In recent years, Kadyrov has been accused of the mass detention of those who are suspected to have engaged in homosexual behavior in the Chechen Republic. Many of LGBTQ+ people had to leave Chechnya or even Russia.

Kadyrov was also suspected of involvement in high-profile assassinations outside the Chechen Republic. Among the victims were a journalist Anna Politkovskaya, Chechen security officials and opponents of Kadyrov Movladi Boysarov, Ruslan Yamadayev, Umar Israilov, human rights activist Natalya Estemirova, and one of the Russian opposition leaders Boris Nemtsov.

The Putin regime is actively using Kadyrov for armed interventions outside the country. “Kadyrovtsy” participated in military aggression against Ukraine. Chechen security officials also take part in a military operation in Syria on the side of the Syrian dictator Bashar Assad.

Currently, Ramzan Kadyrov is one of the main pillars of the Putin regime in Russia. Kadyrov invariably expresses his support for Putin and provides a high percentage of votes for Putin at the rigged elections. He publicly threatens opposition leaders and journalists with reprisal. The personal guard of Ramzan Kadyrov's “Kadyrovtsy” has actually turned into one of the main punitive bodies of the Putin regime, killing opponents of the regime in the North Caucasus and intimidating the opposition throughout the Russian Federation.

In 2017, the United States imposed sanctions under the Magnitsky Act on Kadyrov, accusing him of personal involvement in repression, torture, and murder.

A Threat to National Security

Widespread Torture in the Chechen Republic: Torture by units under the effective command of Chechen Prime Minister Ramzan Kadyrov

Ramzan Kadyrov explained to journal GQ what is the military style, he said that he will continue killings and that Putin is beauty

People are being tortured and killed’: Chechnya’s deadly anti-LGBT crisis

Chechnya wants to ‘eliminate’ gay men by the end of May, reports suggest