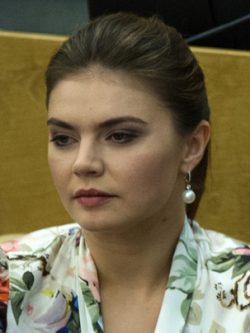 Chairwoman of the board of directors of the National Media Group.

KABAEVA, Alina Maratovna (b. 1983) is a retired Russian gymnast and former member of the State Duma. Born in Tashkent into a Russian-Tatar family of athletes, she started her career rhythmic gymnastics at the age of 11. She was a member of the Russian national team since 1996. In 1998, she won the European Championship, and then she became the champion of Europe four more times. In 1999, she won the World Cup. She participated in the Olympic Games in Sydney in 2000 and Athens in 2004, where she won a gold medal. In 2001, Alina Kabaeva was convicted of using furosemide doping and was disqualified for two years. In 2007, she completed her sports career.

From 2001 to 2005, Kabaeva was a member of the Supreme Council of the United Russia party. Kabaeva was twice elected to the State Duma in 2007 and 2011. In 2014, Kabaeva became the Chairwoman of the board of directors of the National Media Group (NMG) holding, the largest Russian media holding. The owners of the NMG are Putin’s associates Yuri Kovalchuk, Gennady Timchenko (via Surgutneftegas), Rossiya Bank (known as the bank of president’s friends), and Gazprom. According to several unconfirmed media reports, she is the wife or mistress of Vladimir Putin.

A former Olympic athlete, Alina Kabaeva is now one of the members of the Putin regime’s power Olympus. It is symbolic that Kabaeva’s sudden rise to the Supreme Council of the ruling party coincided with a doping scandal when she was suspended from participation in competitions for two years. Even before the end of her sports career, she irrevocably linked herself to the Putin regime. In June 2005, she, among other pop and sports stars, signed an infamous “Letter in support of the verdict to the former managers of the Yukos oil company” approving the politically motivated verdict to Khodorkovsky and Lebedev.

As a State Duma deputy from the ruling United Russia party, Kabaeva successively followed the party’s fluctuations. The first speech of Alina Kabaeva at the plenary meeting of the Duma in June 2009 was given on the draft law on simplification of registration of NGOs, which she supported and made several amendments. And the last bill she signed was about labeling NGOs critical of the Kremlin policies as “foreign agents”. This law, adopted in response to the growth of protest activity since 2011, marked a government attack on independent civil society structures, aiming at their discredit and creating legal prerequisites for their prosecution. Kabaeva voted for a few of these controversial laws that were speedily adopted in 2012 and 2013. Also, Alina Kabaeva participated in the creation of the so-called “Dima Yakovlev Law”, popularly called the “law of scoundrels”, which, among other things, forbade Americans to adopt Russian children, including those terminally ill.

Rumors and speculations about a love affair between President Putin and Alina Kabaeva circulated since the mid-2000s. In April 2008, the Moscow Correspondent newspaper published news that Alina Kabaeva and Vladimir Putin are planning a wedding. However, a few days after the publication, the owner of the Moscow Correspondent, Alexander Lebedev, terminated the news outlet, explaining it by the unprofitability of the newspaper. The Daily Beast argued that the paper ceased to exist after a phone call from the Kremlin. The New York Post and Paris Match wrote about the secret relationship in 2011. They confirmed their publications by a route sheet provided by the murdered opposition leader Boris Nemtsov. In March 2015, Kabaeva was reported to have delivered a baby at the VIP-hospital of Saint Ann in Ticino, Switzerland; the paternity of her child is disputed.

The unprecedented level of confidence of the Kremlin’s top officials in the former Olympic champion speaks much more eloquently about the connection between the two persons. The National Media Group, which she leads, owns large stakes in almost all major Russian federal media that reproduce government propaganda. The NMG itself belongs only to the most trusted friends of the president. Anyway, Kabaeva associated her fate with Putin and bears responsibility for the results of his policy.

Alina Kabaeva Could Be The Next Mrs. Putin

Is Putin in Switzerland for Birth Of Secret Love Child?