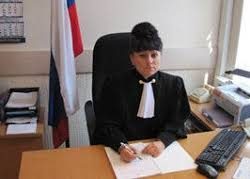 IVANOVA, Elena Alexeyevna is a Judge of the Moscow City Court. Until October 2012, she was a judge of the Tagansky District Court of Moscow.

Judge Ivanova managed to participate in several political cases during her judicial career.

On April 19, 2012, she extended the arrest of Ekaterina Samutsevich, Nadezhda Tolokonnikova, and Maria Alekhina, accused under Part 2 of Art. 213 of the Criminal Code (“hooliganism motivated by hatred and enmity, by preliminary conspiracy group”) for participating in the Pussy Riot protest dancing in the Cathedral of Christ the Savior in Moscow.

On April 25, 2016, Ivanova upheld the decision to extend the custody of an architect from St. Petersburg Sergei Akhmetov, who had already been at the Butyrka pre-trial detention center for five months at that time. The investigation accused him of allegedly grabbing a policeman by the hand and tearing off his shoulder strap at a rally in support of the Navalny brothers on July 18, 2013. The prosecutors referred to photo and video materials that depict a person clinging to a police officer as evidence of guilt. Akhmetov claimed that he has not been in Moscow since 2011, and he only clicked “Going” button on the Facebook event page, but did not go anywhere. This Facebook click became the reason for the detention. The investigators analyzed the profile photos of members of the event page, and Akhmetov seemed the most similar to the person on the video footage. The examination of the forensic center of the Ministry of Internal Affairs clearly said that Akhmetov and the person in the photo available to the investigation are different people. The results investigator Vladimir Lebedev had the results of the examination on March 4, but he said no word about it at a court hearing on March 10. Akhmetov’s lawyers suggest that he did it deliberately to mislead the court and to leave the suspect under arrest. Later, the criminal case against Sergei Akhmetov was closed.

Ivanova also participated in the Moscow Case, criminal persecution of participants of the rallies in July-August 2019 in Moscow against the non-registration of independent candidates in the election to the Moscow City Duma. On September 30, 2019, the Moscow City Court trio, presided by judge Elena Ivanova, decided to change the sentence to actor Pavel Ustinov for one year in prison. Pavel Ustinov was accused of assaulting an employee of the Russian Guard during the rally in Moscow. Meanwhile, in the video attached to the materials of the court, it was clear that Ustinov did nothing before the arrest, but calmly stood and looked at his phone. Nevertheless, Judge Ivanova still found Ustivnov guilty, thereby making a deliberately unjust decision.

On October 4, 2019, Ivanova denied the appeal against the verdict of the Tverskoy court in the case of the former head of Vladivostok Igor Pushkarev, the former director of the Vladivostok Roads Municipal Unitary Enterprise Andrei Lushnikov, and the former head of the Vostokcement Group Andrei Pushkarev. Igor Pushkarev was accused of receiving bribes from his brother while being the mayor of Vladivostok. His brother Andrei headed the company, previously owned by Igor Pushkarev. At the same time, according to some sources, attorneys drew the attention of the court to illegal wiretapping, inaccuracies, inconsistencies in dates, illegal searches, unauthorized copies, and the expiration of execution deadlines for a few documents.