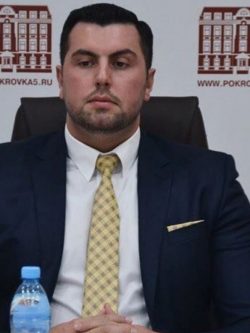 Alexander Ionov was born on December 12, 1989, in Moscow. He graduated from the Moscow State Agroengineering University with a degree in economics (2012) and got a master's degree in vocational education from the Russian State Agrarian University (2014).

In March 2012, Ionov created and headed the Anti-Globalization Movement of Russia (ADR). Also, at the same time, he was co-chairman of the Committee of Solidarity with the Peoples of Syria and Libya under the leadership of former State Duma deputy Sergei Baburin (in this status, Ionov spoke at the scientific and practical conference “Arab Spring in Syria” at MGIMO in March 2013). In the spring of 2013, ADR members arrived in Damascus, where they presented President Bashar al-Assad with an honorary membership card.

In 2013, Ionov became a member of the public council at the Internal Affairs Directorate for the Central Administrative District of Moscow, a year later - a member of the presidium of the All-Russian Public Organization Officers of Russia and joined the coordinating council of the Anti-Maidan movement. In 2015, he already became Deputy Director for International Cooperation at the Institute for Security and Sustainable Development, in 2016 - a member of the Public Monitoring Commission (POC) of the city of Moscow, head of the subcommittee on the development of international cooperation in the Security Committee of the International Congress of Industrialists and entrepreneurs, as well as the President of IONOV TRANSCONTINENTAL LLC.

According to media reports, Ionov is engaged in the security business in Syria, as well as advising local businessmen. Ionov is a co-founder of Million LLC with an authorized capital of 12 thousand rubles. The company was founded in mid-2020. Ionov's business partner is Maria Mikhailova. The company has several types of activities, including financial intermediation and trade. He is also the founder of the Syrian company Mubashar LLC. Ionov himself confirmed that his structures serve to circumvent Western sanctions against the Syrian government for about 60 Russian companies.

Alexander Ionov is co-chair of the security committee of the International Congress of Industrialists and Entrepreneurs and vice-president of the International Committee for the Defense of Human Rights (France), a dubious human rights group that has been repeatedly accused of fraud. In December 2021, it became known that Alexander Ionov joined the new composition of the Public Council of the Federal Penitentiary Service.

Before becoming infamous as an informer on Meduza and Important Stories, which resulted in these publications being recognized as “foreign agents,” the young pro-Kremlin “social activist” Alexander Ionov was more interested in foreign policy projects. So, in 2019, Ionov got on the pages of The Atlantic, which accused him of interfering in American politics. At that time, Ionov, through his movement, paid for legal services for Maria Butina, a Russian national arrested in the United States. Since 2018, Alexander Ionov’s Anti-Globalization Movement has raised more than 2 million rubles (over $30,000) for Butina through a special website. According to Ionov himself, his movement cooperates with the Russian Foreign Ministry.

It is difficult to explain Ionov's rapid career rise through a whole galaxy of GONGOs associated with the Kremlin. One way or another, while still a student, he ends up at the head of the pro-Kremlin and anti-Western organization Anti-Globalization Movement of Russia. “This is a socio-political movement that advocates ensuring the full sovereignty of the states of the world and, above all, the sovereignty of Russia itself as an independent player in the political, economic, and cultural arena of the world. The movement aims to protect traditional moral values and ensure all aspects of Russia's security,” Ionov’s website says. Members of the movement held solo pickets and a few rallies with portraits of Muammar Gaddafi near the US embassy and NATO offices, and also organized trips to Syria to express support for dictator Bashar al-Assad.

Since 2014, the Ionov movement has been regularly receiving government grants (formally from the National Charitable Foundation) and holding major events under the patronage of the Kremlin. Thus, in 2014 ADR held an international expert discussion “National Dialogue. The right of peoples to self-determination and building a multipolar world.” It was attended by representatives of the occupied territories in eastern Ukraine and several leaders of marginal Western movements. In 2015 and 2016, again with a grant from the National Charitable Foundation, Ionov’s movement brought together separatists from countries unfriendly to the Kremlin at the “Dialogue of Nations” conferences in Russia. The event was attended by members of the Sinn Fein party from Ireland, Catalan separatists, members of the Nationalist Movement of Texas, representatives of Latin America and Hawaii, as well as people from the self-proclaimed DNR and LNR.

It should be noted that since 2014, Ionov has been a member of the coordinating council of the Anti-Maidan paramilitary movement, the stated goal of which is “to prevent “color revolutions,” street riots, chaos, and anarchy.” The movement included the Combat Brotherhood, as well as a few military and Cossack organizations. This movement opposes the change of power in Russia, opposition activists, and favors strengthening the “power vertical.” Participants in the movement have been repeatedly accused of committing provocations against opposition activists and politicians. In 2016, the movement initiated the educational program “Scenarios for the Future of Russia,” created with the RUDN University. Under the guise of scientific and educational lectures “on countering destructive political forces,” representatives of the movement and the university evaluated the “protest potential” of students and teachers during their visits to several dozen Moscow and regional universities. Based on the results of the study, they compiled reports for the government and state security services. “How to recognize the “fifth column”? It's very simple: anyone who calls for a boycott of reasonable measures and decisions demoralizes people, tries to sow anarchy in civil society, and inclines them to an open struggle with the authorities! For the “fifth column” there are no options that provide for a normal negotiation process, they are active and tough, as they have specific goals and objectives!” In such terms, Ionov explained his vision of the situation in Russia, and promised to “strangle in the bud” the “pro-Western Bandera populism” in Russia.

In subsequent years, Ionov concentrated his activities around the provision of intermediary services to Russian businessmen and the government of Bashar al-Assad. In 2018, The Bell published an article in which Alexander Ionov was presented as a businessman whose “companies in Syria provide both military and civilian services.” “Ionov himself says that he acts as a kind of dealer for almost 60 Russian companies in Syria,” the publication noted. “They work in the energy sector, in construction, and in the transport sector, the businessman lists them without naming the companies.”

In the spring of 2021, shortly after Ionov received a certificate of honor “for assisting the bodies of the Federal Security Service,” signed by FSB Director Alexander Bortnikov, he filed a plea with Roskomnadzor to recognize the independent webzines Meduza and Important Stories as foreign agents. The document stated that Meduza also refers to foreign media, and “criticism of the activities of law enforcement agencies and coverage of the activities of opposition movements is becoming a frequent story.” On April 23, 2021, Ionov's denunciation was granted, and the above-mentioned publications were added to the register of “foreign agents”-media. Encouraged by success, he continued to compose such slanders. In June, he appealed to the Investigative Committee with a complaint against Novaya Gazeta because of the article “Shakespeare and Schubert Undermine Russia,” which said that he received funding from the United States. Ionov also intends to apply to the Ministry of Justice with a request to check the publication within the framework of the law on foreign agents. And in September, Alexander Ionov sent an appeal to the Prosecutor General's Office of the Russian Federation with a request to recognize Elizaveta Osetinskaya, the founder of The Bell, as a “foreign agent.”

Towards the end of the same year, Ionov joined the new composition of the Public Council of the Federal Penitentiary Service. It is noteworthy that at the same time, well-known human rights activists Eva Merkacheva and Anna Karetnikova were expelled from the council