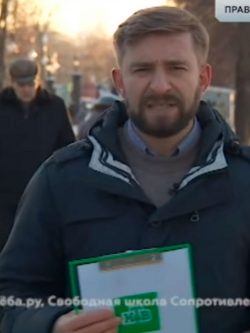 An employee of the Russian television channel NTV, author and presenter of the program “Emergency. Investigations” on NTV, the creator of the slanderous “investigative” films “Debtors of the State Department,” “Radio Nesvoboda,” and “Eurocollectors” directed against Russian human rights and opposition organizations, as well as media independent of the Russian government.

- Deliberate defamation and distortion of facts against Russian human rights and opposition organizations and individuals, as well as journalists independent of the Russian government.
- Falsification of factual material serving as the basis for such “investigations,” the defamation of the honor and dignity of the human rights defenders, independent journalists, politicians, representatives of European and American organizations, NGOs, and media.
- Numerous facts of violation of journalistic ethics, blurring the lines between investigative journalism and political propaganda.

Roman Igonin gained fame back in 2016 as the author of the film “Debtors of the State Department.” It “exposes” independent regional media receiving funds from the American MDIF fund, allegedly funded by US government agencies, which, in turn, allegedly interfere with the editorial policy of Russian media. The “denounced” foundation then commented on the statements made by the “investigator” Igonin in his film as follows: “The program [NTV's film Debtors of the State Department] was aimed solely at discrediting independent Russian media in the year of parliamentary elections and the year preceding the presidential elections in Russia. This program is not an example of balanced journalism, but pure propaganda, teeming with lies, half-truths, and innuendo. Although this program does not merit serious discussion, we consider it our duty to point out the most serious distortions and omissions.

1. Sources of financing for MDIF are very diverse and include investment funds, banks, development agencies, foundations, and individual investors from several countries, including Germany, the Netherlands, Norway, Sweden, Switzerland, and the United States. Contrary to the program's insinuations, the MDIF has no ties to the US government. It has been years since MDIF received any funding from the US government. It accounted for less than 1% of all our funding and was directed to media education in Southeast Asia, with absolutely nothing to do with Russia or the Russian media.

3. The reason for our decision to terminate the loan agreement with Tula Novosti is also connected exclusively with business: the company did not fulfill its obligations on loan payments. The company stopped making payments in April 2015” (Archive of the Tomsk TV channel TV-2 / “In the wake of a fake”).

It is interesting that Andrey Mazov's Tula Novosti, mentioned in the final paragraph of MDIF's comments, who did not fulfill their obligations under the loan agreements, continued to actively interact with the NTV “investigator” Roman Igonin. In particular, another Igonin’s film, “Radio Nesvoboda” later appeared on the website of this media outlet.

In the film, released the same year, Radio Nesvoboda (Radio Un-Liberty), the author-investigator poses “sensational” questions: “What price do journalists pay to get into the Western media? And what do those who decide to leave pay with? What connects Radio Liberty with Joseph Goebbels? And is it true that the director of the Moscow bureau has a huge apartment on Tverskaya street and a mansion on Rublevka?” At the same time, “Radio Liberty's connections with Goebbels” are illustrated by photographs of Nazi henchmen who, after the end of World War II, were allegedly the first employees of the radio station. “Links with the CIA” are postulated on the example of “Canadian citizen Savik Shuster,” who once headed the Moscow bureau, who, in the words of the author of the “investigative” film, “was not without reason suspected of these connections.”

It should be noted that according to the plot of the film, the “investigative journalist from NTV” did not manage to get inside the very headquarters of Radio Liberty in Prague. The latter circumstance did not prevent the far-reaching conclusion that “a structure built on a military model and resembling a bunker” cannot be just an editorial building. Consequently, some special secrets and secrets are hidden behind its walls. The Svoboda bureau in Moscow is not guarded so seriously, but the journalist Igonin is nevertheless not allowed there either. As a result, a significant part of the airtime allocated to his attempts to break into the editorial office.

In the 2017 NTV film Eurocollectors, the author of which is also Roman Igonin, the plot is built around Russian organizations that are allegedly engaged in “knocking out” money from the Russian budget in the interests of Western countries. For example, it claimed that the Memorial Human Rights Center is “financed from abroad for anti-Russian purposes,” and for this reason, Memorial is seeking Russia to pay the compensation awarded by the ECHR in almost €2 billion to former shareholders of the Yukos company. At that time, even the government-loyal Public Collegium on Press Complaints under the leadership of Federation Council member Vladimir Lukin sided with Memorial Human Rights Center and the Institute of Law and Public Policy, which filed a joint complaint against NTV about the “Emergency. Investigation. Eurocollectors” film. This appeal said that the accusations of “anti-Russian activities and espionage in favor of Europe” against NGOs are based on “outright lies or half-truths, which, through the use of expert opinions, are given the appearance of truthfulness.”

One of the “experts” in the program, in particular, was the political observer Pavel Shipilin, whose position was presented by the author of the film, Roman Igonin, as “the opinion of a professional lawyer,” while no information was provided on the receipt of the corresponding competency of the said person. As a result, the members of the Collegium conclude that the film presents “false statements passed off as facts,” “groundless hints and accusations” are carried out, there is “non-discrimination of fact and commentary, involvement of inappropriate experts, lack of marking on operational footage,” and besides “deliberate provision of incomplete and limited information.” As a conclusion, it is summarized that this NTV “investigation” “contains numerous violations of the basic principles of journalistic ethics: the principle of ensuring the rights of citizens to information, the principle of fair reporting, the principle of professional and social responsibility of a journalist.”

In one of the last Igonin's “masterpieces,” the 2020 film “Fallen Against the Fallen,” about the attacks on the “Immortal Regiment” WW2 memorial initiative and attempts to discredit the memory of the veterans of the Great Patriotic War, to whom it is dedicated. According to the film, “there have been over a hundred attempts to upload photographs of the Nazis to the website [of the Immortal Regiment].” According to Igonin's version, this was orchestrated by the Western curators. Interestingly, the initiators of this memorial initiative were the journalists of the Tomsk TV channel TV-2, some of the “debtors of the State Department” in the earlier Igonin’s film.