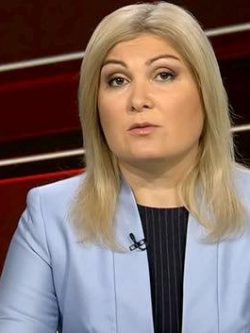 GUREVICH, Salina Valeryevna was born on July 13, 1979. In 2000, she graduated from the Institute of Public Administration with a degree in law and the New Russian University in 2002 with a major in criminal law. She has been an attorney at the Law Chamber of the Moscow Region since 2005. Since the mid-2000s, she has been a member of the Justice Inter-regional public organization. Since 2013, she has been an expert at the Monitoring Center for the Identification of Dangerous and Illegal Internet Content. Since 2016, she has been a member of the Public Council under the Commissioner for the Rights of the Child under the President of the Russian Federation.

Participating in the criminal and procedural prosecution of Russian opposition politicians.

A woman lawyer with an ominous name appeared in the media shortly after the attempt on Mikhail Beketov, the journalist from Khimki, Moscow Region. It is believed that in the case of the attack on the Beketov, she followed the instructions of the state security agencies to cover the assassination paymasters. In recent years, Gurevich has become famous for her role in disbarring Mark Feygin from his attorney license and regular attacks on the Russian opposition.

In 2008, during the protests against the destruction of the Khimki forest, the mayor of Khimki Vladimir Strelchenko accused Beketov of libel and filed a lawsuit against him. Beketov published critical articles on the activities of the Khimki administration in his newspaper and reported on the protests to preserve the Khimki forest. In November of the same year, Beketov was attacked, fell into a coma and became disabled. From the very beginning of his conflict with the Moscow Region authorities, his lawyer was Stanislav Markelov, assassinated in 2009. Suddenly after the attack on Beketov, Stalina Gurevich and Andrei Stolbunov from the Justice Association declared themselves the lawyers of the Khimki journalist, even though neither Beketov, being in a coma, nor his wife approved the change of the lawyer. His case remained unsolved.

Shortly before his death, Markelov criticized the Justice Association, pointing to their dubious reputation. According to Markelov, the involvement of the association in Beketov’s case was since “this is an organization dealing with unlawful affairs. Now they urgently need to secure themselves and take a high-profile case against the administration of the Moscow Region.” According to Evgeny Arkhipov, chairman of the Russian Bar Association of Lawyers for Human Rights, “the difference between Justice and other human rights organizations is that it has a different point of view on the socio-political processes taking place in the country. This is an organization of an ultra-conservative stance, which cooperates mainly with ultra-patriotic, Orthodox movements.” Its leaders, Dmitry Baranovsky and Andrei Stolbunov were accused of money extorting. The association was involved in raider seizures of enterprises in the Moscow Region and the bribery of court and law enforcement officials.

In 2017, Stalina Gurevich represented the interests of the infamous pro-Kremlin Ukrainian journalist and blogger Anatoly Shariy in his lawsuit against Mark Feygin for divulging information that Shariy was a defendant “in the pedophilia case.” The Khamovniki court upheld the lawsuit. After that, Gurevich filed a complaint at the Moscow Bar for Feygin’s three tweets regarding her client. She demanded to disbar him for violation of the Code of Professional Ethics of a Lawyer. At the first appeal, the chamber rejected this complaint. The Investigative Committee of Russia also rejected the complaint, there Gurevich wrote a statement on opening a criminal case against Feygin under the article on defamation. This did not stop Gurevich, and the Moscow Bar accepted the second complaint, and as a result, the Council of the Moscow Bar Association decided to disbar Mark Feygin. According to him, this decision was an attempt by the Russian authorities to “get me out of defending the Ukrainian journalist Roman Suschenko accused of espionage by the Russian authorities.”

Gurevich collaborates with the state security agencies of the Russian Federation, initiating and participating in the criminal prosecution of Russian opposition politicians. She does not hide her support for the Putin regime and participates in propaganda talk shows on Russian TV and radio broadcasts, and works at the propaganda channel Tsargrad. Fortunately, Gurevich no longer pretends to be an independent lawyer and does not hesitate to make loyalist statements. She jokes in a conspiracy style of getting into the Putin’s List while threatening its compilers: “This is a great honor, especially considering the other participants in the List. Of course, the dossier has nothing to do with truth or law, and the persons who compiled it have committed several criminal offenses. These people are ordinary Judas, who betrayed their homeland for 30 coins.” Of course, there is not much honor of being on the same list with murderers, liars, and thieves, but this is the only thing that she deserves besides the just retribution.