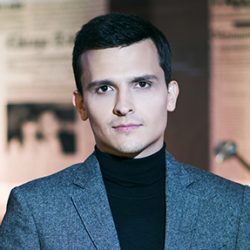 GUDOSHNIKOV, Alexei Valeryevich (b. 1988) was born in Uralsk, Western Kazakhstan. He graduated from the philological faculty of the Orenburg State Pedagogical University in 2010. In the same year, he became the host on the radio station Russian News Service (RSN), where he worked until 2014. In 2014, after the departure of Sergei Dorenko from RSN, he got a personal program on Dorenko’s new radio station Govorit Moskva (Moscow Says). Gudoshnikov became doing morning broadcasts on the radio after the death of Dorenko in 2019. Since 2015, he has been hosting the propaganda talk shows Special Article and Open Air on Zvezda TV channel owned by the Russian Defense Ministry.

Alexei Gudoshnikov is considered a follower and imitator of his former boss, the late TV journalist and founder of the Govorit Moskva radio station, Sergei Dorenko. Collaboration with one of the founders of modern pro-Kremlin propaganda gave young Gudoshnikov extraordinary self-confidence. According to listeners, in his broadcasts, he regularly insults and screams at guests and listeners, and takes a more openly pro-government stance than his former colleague. However, it is the Russian Defense Ministry TV channel, Zvezda, known for its aggressive militaristic agenda and the spread of conspiracy theories, that allows Gudoshnikov to reveal his talents of a propagandist. His programs Open Air and Special Article almost always consist of three blocks: a discussion of the horrors of “fascist Ukraine,” approval of the decisions of Putin and the government, and exposure of the tricks of the “treacherous West.”

Gudoshnikov represents a new generation of pro-Kremlin propagandists-careerists. Realizing that the current regime did not come forever, they are struggling to please the authorities here and now. At the same time, they enjoy the reckless sense of impunity. Sooner or later, the time will come when it will be possible to bring the propagandists like Gudoshnikov to justice.