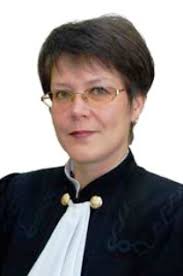 Judge of the Moscow City Court

GUCHENKOVA, Elena Anatolyevna was appointed to the post of criminal judge of the Moscow City Court by a decree of the President of the Russian Federation of May 7, 1995.

The Moscow City Court veteran, Judge Guchenkova, has long been famous for her inexplicable cruelty to the defendants. She is suspected of custom-made sentences; much more often than other Court’s judges she passes extremely cruel sentences, many of which have been reviewed in the Supreme Court. In the summer of 2017, she was transferred to the Court’s appeal team. In this status, she participated in the Moscow case, the criminal prosecution of protesters who rallied against the prohibition of independent candidates from participating in elections to the Moscow City Duma.

In November 2007, Judge Guchenkova led the trial in the case of Levon Chakhmakhchyan, a member of the Federation Council from Kalmykia. He was accused of extorting $300,000 from the head of Transaero Airlines Alexander Pleshakov. There were many inconsistencies in the case, and no one of the accused pleaded guilty. Moreover, Levon Chakhmakhchyan claimed that the criminal case brought against him was a special operation to discredit him, and Pleshakov was participating in it as a “decoy duck.” Guchenkova dismissed any motions of the defense of the accused and granted all motions of the prosecution. In this case, there was no consent of the Federation Council to bring Chakhmakhchyan to criminal responsibility, that is, he was tried without even removing his immunity. The defendants in the case received from seven to ten years in prison. Subsequently, the Judicial Board of the Supreme Court of the Russian Federation changed the verdict of the Moscow City Court, re-qualified the actions of Levon Chakhmakhchyan and other defendants, reducing their sentences.

In 2009-2010, Guchenkova led the trial of another senator, Igor Izmestiev. The case included a lot of charges, ranging from tax evasion, bribing, organizing contract killings, as well as terrorist activities. It is noteworthy that all the charges were based on the testimony of the leader of the Kingisepp gang Sergey Finagin. The jury initially examined the Izmestyev case. It inclined to acquittal, but in the spring of 2010, Guchenkova suddenly dismissed the jury, and then three professional judges led the trial. Former jurors talked about pressure from law enforcement agencies to convince them to admit Izmestyev’s guilt. Moreover, the testimonies of the main witnesses for the prosecution against Izmestyev contradicted each other. As a result, “by partial addition of punishments,” the former senator received a life sentence.

In the fall of 2010, Judge Guchenkova examined the case of Vice President of Euroset Boris Levin. The defense has repeatedly requested his release from jail and to change the measure of restraint due to his poor health. Guchenkova, however, rejected all these petitions. Levin was more fortunate than Izmestyev, and the jury acquitted him.

In 2017, Judge Guchenkova passed sentences ranging from 22 to 4 years in prison to the head of the Main Directorate for Economic Security and Anti-Corruption, Major General of the Russian Ministry of Internal Affairs Denis Sugrobov and his colleagues, accused of creating an organized criminal group. The case was associated with a personal conflict between the Interior Ministry general Denis Sugrobov and the FSB general Oleg Feoktistov. Supposedly, the Sugrobov department investigated corruption activities of the state security officer Feoktistov. The court did not take into account the testimonies of the defendants, as well as the fact that they acted following the Law on operational-search activity. The court order issued to lawyers was significantly different from the verdict that Guchenkova read out in the courtroom. The cassation board of the Supreme Court of the Russian Federation, which considered the appeal in this case, reduced the sentences for the accused by almost half.

On August 14, 2019, Judge Guchenkova rejected the appeal of the decision to arrest Samiriddin Rajabov, who was detained during a protest rally on July 27. According to investigators, Radjabov threw a plastic water bottle at a riot policeman and the former allegedly felt “physical pain.”

On August 15, 2019, Guchenkova dismissed an appeal of the decision to arrest Alexey Minyailo, a member of the campaign headquarters of an unregistered candidate for the Moscow City Duma, Lyubov Sobol. He was accused of participating in the “riots” on July 27. On September 26, the Investigative Committee terminated the case against him.