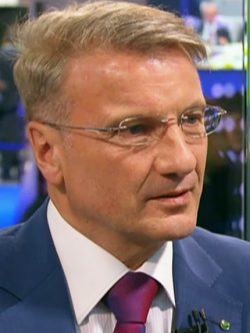 CEO and Chairman of Sberbank of Russia, a former Minister of Economic Development and Trade of Russia

From 1998 to 2007, he worked in the Government of the Russian Federation. In 1998-2000, he was Deputy Minister of State Property. In 2000-2007, he was Minister of Economic Development and Trade. Since November 2007, he has been running Sberbank, the biggest state-owned bank in Russia.

Meddling in the affairs of a foreign state, economic crimes.

In 2014, due to the annexation of Crimea and Russia's intervention in Ukraine, Sberbank, led by German Gref came under the EU and U.S. sanctions. Also in 2014, Ukraine accused Sberbank of “financing of terrorism” and supporting terrorist groups in the east of the country.

In 2016, The Observer revealed Sberbank’s ties with key employees of the campaign headquarters of the presidential candidate Hillary Clinton. According to The Observer, Sberbank chose the Podesta Group to lobby for its interests in the United States after the imposition of sanctions. The founders of the company are two brothers Tony Podesta and John Podesta. John, the former chief of staff for President Bill Clinton and an adviser to President Barack Obama, was the head of the campaign headquarters of Hillary Clinton. And his brother, Tony, one of the most influential lobbyists, was collecting donations to the Hillary presidential campaign fund. The media expressed concern that the Podesta brothers could have appeared in Clinton administration if she had won the election.

The Observer, citing a source in NATO counterintelligence, also noted that Western intelligence is aware of Sberbank’s close relationship with Vladimir Putin and his regime. Funds passing through Sberbank accounts are regularly used to support covert intelligence operations. Its offices abroad are also often used as a cover for the activities of the Russian Foreign Intelligence Service (SVR). According to the source, Sberbank has outposts in almost two dozen foreign countries, operating as branches of the Foreign Intelligence Service outside Russia: many of its senior officials are “former employees of Russian intelligence.” Within Russia, Sberbank has close relations with the Federal Security Service (FSB).

Gref, Sberbank, and subsidiaries are repeatedly accused by entrepreneurs of economic crimes, namely, illegal seizure of company assets. One of the most notorious cases happened with the Russian company for the extraction of crushed stone, Pavlovskgranit, and its former owner, Sergei Poymanov, who lost his business because of his unwillingness to transfer company shares to Sberbank Capital. Some other businessmen who owed Sberbank and Sberbank Capital are hiding abroad or are in prison, and accuse Sberbank and its subsidiary Sberbank Capital of raiding.

In January 2018, Herman Gref was included in the Kremlin report of the U.S. Treasury Department, a list of Russian officials, politicians, and businessmen close to the Russian president. Assumingly, sanctions may be imposed on these persons.