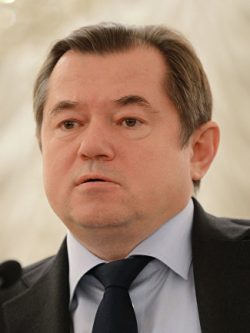 Russian politician and economist, member of the National Financial Council of the Bank of Russia, and, since 2008, a full member of the Russian Academy of Sciences. Glazyev was minister of Foreign Economic Relations in Boris Yeltsin's cabinet from 1992 to 1993, a member of the State Duma from 1993 to 2007, one of the leaders of the electoral block Rodina from 2003 to 2004, a candidate for the Presidency of the Russian Federation in 2004, and advisor to the president of the Russian Federation on regional economic integration from 2012 to 2019. As of 2021, he is the Commissioner for Integration and Macroeconomics within the Eurasian Economic Commission, the executive body of the Eurasian Economic Union.

Public support for Russian military aggression against Ukraine. Sergey Glazyev is included in the report "1500 warmongers" compiled by the Free Russia Forum. The report contains the names of Russian public figures, military commanders, members of the parliament, propagandists, artists and athletes who have publicly spoken out in support of Putin's aggression or are directly involved in it. The Free Russia Forum is seeking sanctions against them in the European Union.