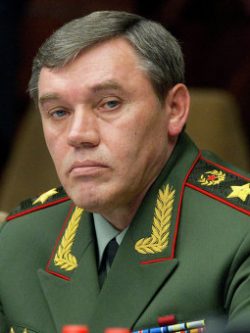 Chief of the General Staff of the Armed Forces of Russia, member of the Security Council of Russia (2012 - to date)

GERASIMOV, Valery Vasilyevich (b. 1955) is one of the key figures of the Russian military planning. Born in Kazan, he graduated from Kazan Higher Tank Command School in 1977, from the Military Academy of Armored Forces in 1987 and the Military Academy of the General Staff of the Armed Forces of the Russian Federation in 1997. He commanded a platoon, company, battalion in the Northern Group of Forces and the Far Eastern Military District. Since 1987, he served as chief of staff and commander of a tank regiment, chief of staff of a motorized rifle division in the Baltic Military District. From 1993 to 1995, he was the commander of a motorized rifle division in the Northwest Group of Forces.

The organization, preparation for and unleashing of armed conflict in Ukraine, creation of a “hybrid warfare” concept (“new generation war”, “Gerasimov doctrine”).

Shortly after becoming the Chief of the Russian General Staff, Gerasimov put forward his vision of a military-political strategy. In February 2013, he published the article “The value of science is in foresight” in the Russian paper Military-Industrial Courier, retold of his report on hybrid warfare methods a month earlier before the Academy of Military Sciences. “Asymmetric actions have become widespread... These include the use of special operations forces and the internal opposition to create a permanent conflict throughout the rival state, as well as informational pressure, the forms and methods of which are constantly being improved”, Gerasimov stated in his article.

The doctrine got international fame after the subsequent actions of Russia against Ukraine, which completely coincided with its positions. The description of the hybrid warfare, which includes “political, economic, informational, humanitarian and other non-military measures” was fully implemented during the armed aggression of the Russian Federation against Ukraine. “Remote contactless influence on the enemy becomes the main way to achieve the goals of a battle and an operation”, Gerasimov says in his article, “All this is complemented by military measures of a hidden nature, including the implementation of information warfare and the actions of special operations forces”. The doctrine does not specify whether these “information warfare” measures are military or non-military.

Valery Gerasimov took part in organizing and developing plans for the Russian invasion of Crimea and Donbas. As a result, he was included in the sanctions lists of the European Union, the United States, and Canada. The Bellingcat investigative team includes Gerasimov among those responsible for transporting the Buk air defense system to the territory of Donbas occupied by pro-Russian militants and for launching a missile that downed the Malaysian Boeing on July 17, 2014. The Military Prosecutor's Office of Ukraine considers Valery Gerasimov the main mastermind of the conflict in Donbas. According to the head of the Investigative Department of Ukraine, Grigory Ostafiychuk, Valery Gerasimov was personally present in the occupied territory of Ukraine during the Ilovaisk battle in August 2014. The Shevchenkovskiy District Court of Kyiv decided on the absentee arrest of Valery Gerasimov and ten other high-ranking Russian military personnel.

In addition to direct organization and participation in the Ukrainian campaign, Gerasimov is the organizer of the Russian military operation in Syria, launched in September 2015. According to Amnesty International, at the end of February 2016, Russian military aircraft deliberately attacked civilians and rescuers. By the end of 2018, Airwars, which tracks reports of victims of airstrikes, recorded between 2,730 and 3,866 civilian deaths in Syria, including from 690 to 844 children as a result of approximately 39,000 Russian airstrikes.

Valery Gerasimov is included in the report "1500 warmongers" compiled by the Free Russia Forum. The report contains the names of Russian public figures, military commanders, members of the parliament, propagandists, artists and athletes who have publicly spoken out in support of Putin's aggression or are directly involved in it. The Free Russia Forum is seeking sanctions against them in the European Union.

Valery Gerasimov, the general with a doctrine for Russia