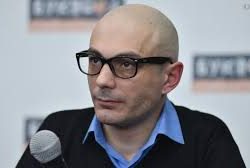 Propaganda and disinformation in the interests of the Putin regime.

Armen Gasparyan is well-known for his aggressive and blatant anti-Ukrainian rhetoric. In particular, on the broadcast of the Vesti FM, Gasparyan speaks about Ukraine as a failed state. “The child was born disabled. Well, I mean the first Ukrainian statehood. He was born with down syndrome. It's a pity, tragedy, but it happens. But the parents turned out to be stubborn. Instead of going to the doctor, on the contrary, they made their main task to pretend this mental disability as the main virtue in life. After 100 years, the Ukrainian statehood should retire, but it didn’t get any better,” he once said.

On October 24, 2017, on the air of the Vesti FM, on Vladimir Solovyov’s program entitled “Liberals, Why Are You Lying?” about the attack on journalist Tatyana Felgenhauer, critical of Putin, Gasparyan accused Ekho Moskvy journalist Ksenia Larina, a colleague of Tatyana, of lying and called her an “outright bastard.”