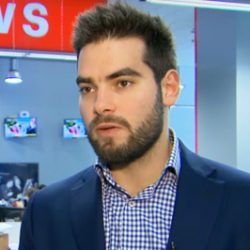 Russian media manager, former Executive Director of News Media and the CEO of LifeNews. The son of Aram Gabrelyanov.

GABRELIANOV, Ashot Aramovich (b. 1989 in Ulyanovsk) entered the Faculty of Journalism of Moscow State University in 2005. In 2008, he left the university after the third year. The same year, he started working at the News Media holding owned by his father. Starting as an assistant PR director, he soon became the head of the Internet project development service. Between 2010 and 2014, he was Executive Director of News Media Holding. In 2013-2014, Ashot was Chief Editor and CEO of LifeNews News Channel. In 2015, he moved to New York, where he is managing the creation and development of Internet services and mobile applications Babo, MakeApp, Magic, Chudo, etc.

Complicity in the aggressive propaganda of the Putin regime, as well as in deceiving the Russian citizens through the deliberate disinformation, distorting reality and instilling intolerance of democratic values and opponents of Putin in the society.

The main basis for the accusations of Ashot Gabrelianov is participation in the management of the propaganda holding News Media and its main information channels. Gabriyanov Jr.'s leadership at NewsMedia coincides with business partnerships with one of Russia's most influential oligarchs from the closest circle of Putin’s friends, Yuri Kovalchuk, and close cooperation with influential officials from the Presidential Administration. The success of Gabrelyanov’s media projects, based on a unique nationwide network of informants, had an obvious corruption nature. The founder of News Media, Gabrelianov Sr., has high-ranking friends in the Ministry of Internal Affairs, as Forbes noted. He never hid his friendship with influential officials of the Kremlin administration, including Vladislav Surkov.

Gabrelianov’s close cooperation with the Presidential Administration was confirmed in 2016 by the publication of his correspondence, revealed by hackers from the Anonymous International group. In particular, it followed that Izvestia and Life published articles on the instructions of Alexei Gromov, the Deputy Head of the Presidential Administration. Gromov edited them directly with Gabrelianov, and also collected compromising materials on the opposition leader and founder of the Anti-Corruption Foundation, Alexei Navalny.

Gabrelyanov’s LifeNews portal has become one of the symbols of unscrupulous propaganda. So, during the election protests in 2011-2012 LifeNews published compromising materials on the opposition leaders following the orders from the Kremlin. In a 2013 article, Ilya Yashin wrote about it this way, “Aram Gabrelyanov, with his son Ashot, seem to be cunning guys who are far from journalistic ethics. They serve the Kremlin not only for money, but they also love Putin sincerely. Indeed, in Europe, they may well be sent to jail for such work methods. And in Russia, they are invited to official presidential receptions.”

The high patronage allowed the Gabrelyanovs to carry out dubious operations in areas not related to the media. So, in 2014, The Insider reported that “the general director of the News Media publishing house Aram Gabrelyanov, his son Ashot, as well as several of his partners, were involved in the illegal transfer of shares in a mining company with a market value of more than a billion rubles.”

Gabrelianov, like most of Putin’s other influential collaborators, was repeatedly exposed to lies. Their ostentatious patriotism and aggressive criticism of the West contrasted to the fact that they enjoy all the advantages of the Western way of life. In April 2014, a few months before leaving for the United States, he tweeted: “I grew up in a city on the Volga, went fishing with my grandfather Sasha. How can I sell my Russian past for the American future? I can not understand.” But a year later, he confessed his love to “the greatest city of New York,” and later requested permanent resident status in the United States. In 2018, the founder of the Anti-Corruption Foundation, Alexei Navalny, found out that Ashot Gabrelianov and his father are the owners of a luxurious apartment in the Neuilly-sur-Seine area of Paris.

Gabrelyanov Jr. officially left his father's holding in the fall of 2014, which means he is fully responsible for using News Media in the information and propaganda war unleashed by Russia against Ukraine during the annexation of Crimea and the involvement in the Donbas. One of the convincing evidence of Gabrelyanov’s complicity in the crimes of the Putin regime is his rewarding in April 2014 with a medal of the Order of Merit for the Fatherland, one of the highest state awards, with the wording “for high professionalism and objectivity in reporting on events in the Republic of Crimea.”