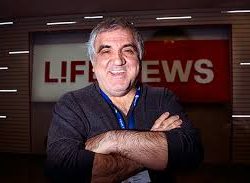 GABRELIANOV, Aram Ashotovich (b. 1961) is a Russian media manager close to the Kremlin. Born in into an Armenian family in Derbent, Dagestan, he started his journalism career in 1985. In 1988 he graduated from the Faculty of Journalism of Moscow State University, got a job in a Ulyanovsk newspaper and became its chief editor in 1990. In 1995, he created the regional publishing holding Vedomosti Media which included the newspapers of Ulyanovsk, Nizhny Novgorod, Samara, Saratov, and Volgograd. In 1997, he began to publish the weekly newspaper Moskovskiye Vedomosti, three years later renamed into Zhizn (Life). It became one of the most circulating tabloids in Russia. In 2001 he founded Life Publishing House, and in 2005 created and headed the News Media holding company. In 2008, he launched the infotainment Internet portal Life.ru. Since 2011, he has been Deputy General Director of the National Media Group and Chairman of the Board of Directors of Izvestia Newspaper. Since 2015, he is president of the Baltic Media Group. In 2018, Aram Gabrelianov resigned as CEO of News Media Holding.

Active complicity in the aggressive propaganda of the Putin regime, dissemination of fake news and misinformation that distorts reality, inciting hatred of democratic values and “enemies of Putin”.

From 2011 to 2017, Gabrelyanov worked closely with one of the most influential Russian oligarchs from the inner circle of Putin’s friends, Yuri Kovalchuk, being the director of the National Media Group. The success of Gabrelyanov’s media projects, based on a unique nationwide network of informants, had an obvious corruption nature. The founder of News Media has high-ranking friends in the Ministry of Internal Affairs, as Forbes noted. Gabrelyanov never hid his friendship with influential officials of the Kremlin administration, including Vladislav Surkov.

The pro-Kremlin stance of Gabrelyanov’s publications was repeatedly noted in the media and analytical reviews. In particular, Gabrelyanov imposed a ban on criticism of the President of Russia, his accomplices, as well as senior church hierarchs. In an interview with the OpenSpace portal, he explained his position as follows: “Putin is the dad of the nation, you cannot demand anything from him”. Gabrelianov’s close cooperation with the Presidential Administration was confirmed in 2016 by the publication of his correspondence, revealed by hackers from the Anonymous International group. In particular, it followed that Izvestia and Life published articles on the instructions of Alexei Gromov, the Deputy Head of the Presidential Administration. Gromov edited them directly with Gabrelianov, and also collected compromising materials on the opposition leader and founder of the Anti-Corruption Foundation, Alexei Navalny.

Gabrelyanov’s LifeNews portal has become one of the symbols of unscrupulous propaganda. So, during the election protests in 2011-2012 LifeNews published compromising materials on the opposition leaders following the orders from the Kremlin. In April 2014, Gabrelyanov closed the Ukrainian newspaper Zhizn (Life) because of the refusal of the local paper to publish pro-Russian propaganda materials sent from Moscow. Gabrelyanov himself repeatedly spoke out extremely aggressively about the democratically elected authorities of Ukraine and always emphasized full support for Russia's aggressive policy towards Ukraine. On May 27, 2016, Aram Gabrelyanov, along with other leaders of the major Russian state and pro-Kremlin media, was included in the sanctions list by the President of Ukraine.

Gabrelianov, like most of Putin’s other influential collaborators, was repeatedly exposed to lies. Their ostentatious patriotism and aggressive criticism of the West contrasted to the fact that they enjoy all the advantages of the Western way of life. When in 2016 it turned out that Gabrelyanov has expensive real estate abroad, he publicly denied this, promising to “give a penthouse” to anyone who finds it. And when Alexei Navalny published an investigation in 2018, according to which Gabrelyanov had bought an apartment in the suburbs of Paris for 1.9 million euros back in 2009, he said that he had “earned it” and refused to keep the promise.

Indirect evidence of Gabrelianov’s complicity in the crimes of the Putin regime is his award in April 2014 with the Order of Honor, one of the highest state awards, “for high professionalism and objectivity in reporting on events in the Republic of Crimea”. He is also a member of the Public Council under the Investigative Committee of the Russian Federation - a significant executor of political repression in Russia.

Media Elites in Post-Soviet Russia and their Strategies for Success