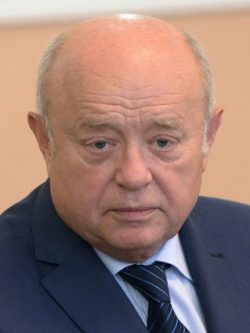 FRADKOV, Mikhail Efimovich (b. 1950) graduated from the Moscow Machine Tool Institute in 1972. In 1973, he became an employee of the apparatus of the economic adviser to the USSR Embassy in India, which is suggestive of his KGB background. In 1981, he graduated from the All-Union Academy of Foreign Trade. In 1984, he became Deputy Head of the Main Supply Directorate of the USSR State Committee for Economic Relations. In 1988, he was appointed Deputy Head, First Deputy Head of the Main Directorate for the Coordination and Regulation of Foreign Economic Operations of the USSR Ministry of Foreign Economic Relations.

Direct implementation of the criminal policy of the Russian leadership.

Throughout the bureaucratic career since the Soviet times, Fradkov held high positions in the most important areas that ensure the functioning of a system of undemocratic power, including foreign economic operations, finances, and secret operations of state security services.

The Fradkov government was engaged in a few controversial projects that either failed and led to the plundering of billions of dollars from the budget or caused serious social tension and protests. Among them are the administrative reform, which only led to an increase in the already gigantic bureaucratic apparatus; controversial monetization of social benefit; the so-called National Projects “Affordable and Comfortable Housing for Russian Citizens,” “Health,” “Education,” etc. According to estimates of the independent experts, the transition to the project-financing plan made the budget and financial schemes of the government even less transparent, creating additional opportunities for large-scale national and cross-border corruption.

The annexation of Crimea and the military aggression of Russia against Ukraine took place in these same years. SVR took an active part in the planning, implementation, and cover of these operations. Since 2014, Mikhail Fradkov appears on most lists of personal sanctions imposed by various countries against persons involved in the illegal annexation of Crimea.

Fradkov played a prominent role in the Syrian crisis. From the very beginning of the confrontation in Syria in the spring of 2011, Russia provided diplomatic support to Bashar al-Assad, blocking draft anti-Assad resolutions of Western and Arab countries in the UN Security Council, involving the imposition of sanctions or military intervention. Russia supported the Syrian government with the supply of weapons, military equipment, and ammunition, as well as the organization of training and the provision of military advisers. In February 2012, Fradkov, along with Foreign Minister Lavrov, participated in key negotiations with Bashar Assad on behalf of Putin.

The official task of RISI, which Fradkov headed in 2017, is “the development of information and analytical materials, proposals, recommendations, and expert assessments for government agencies in Russia.” RISI employees are permanent experts in international politics (USA, China, Ukraine, Syria) of propaganda talk-shows on Russian TV channels. In 2016, they called information about the HIV epidemic in Russia a part of the US information war against Russia. In April 2017, Reuters journalists accused RISI of developing a plan for Russian interference in the 2016 US presidential election.

In 2018, the United States imposed sanctions against Mikhail Fradkov along with 17 officials and 7 businessmen from Russia close to Vladimir Putin.

Fradkov Under Fire for Spy Defection