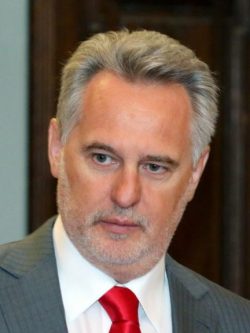 Chairman of the Board of the DF Group

FIRTASH, Dmitry Vasilyevich (b. 1965) graduated from Donetsk Railway College in 1984. In 1984-1986, he served in the Soviet army. After the army, he moved to Chernivtsi, got married and worked as a driver in the fire department of the Chernivtsi shoe factory for some time, but soon became engaged in business. The first success came to him in 1988-1989, when he exchanged 4 thousand tons of Ukrainian milk powder for a batch of Uzbek cotton, which he then sold in Hong Kong and earned $50,000 on this deal. In the early 1990s, he moved to Moscow, where he soon found partners among employees of the Ministry of Commerce of Turkmenistan. In 1994, he signed the first contract with the government of Turkmenistan for bartering food supplies in exchange for natural gas, which he sold to Ukrainian businessman Igor Bakay, the future founder of Naftogaz Ukrainy.

In 2002, Dmitry Firtash created Eural TransGas, which concluded exclusive contracts for the supply of Turkmen gas to Ukraine. Firtash also began investing in the chemical industry, acquiring a controlling stake in the TajikAzot plant, one of the leading producers of mineral fertilizers in Central Asia. In 2003, he acquired the Estonian chemical plant Nitrofert, a major producer of ammonia fertilizers. In the same year, he became a shareholder of Rivneazot, a major producer of nitrogen fertilizers in western Ukraine.

In 2004, a Ukrainian businessman created the offshore company RosUkrEnergo together with Gazprom to carry out gas transit to Ukraine and the EU. The agreement on the creation of the company was concluded with the participation of the then Prime Minister of Ukraine Viktor Yanukovych, the Russian government, the management of Naftogaz Ukrainy and Gazprom. In the gas conflict between Russia and Ukraine in late 2008 - early 2009, the prime ministers of the two countries, Vladimir Putin and Yulia Tymoshenko, agreed to get rid of the intermediary, which the Ukrainian side suspected of smuggling schemes.

In July 2011, Dmitry Firtash became a major shareholder of the Ukrainian retail bank Nadra. In the same year, he was elected Chairman of the Council of the Federation of Employers of Ukraine. Members of the Federation produce up to 70% of Ukraine’s GDP. In February 2013, GDF MEDIA LIMITED, part of the Group DF holding group (Group of Dmitry Firtash), acquired U.A. Inter Media Group Limited, combining the TV channels Inter, Inter +, K1, K2, Mega, NTN, Pixel, Enter-film, and Zoom10. In 2014, the Group DF signed an agreement with the Italian group Intesa Sanpaolo on the acquisition of a 100% stake in the Ukrainian Pravex-Bank. Currently, Group DF combines assets in the chemical industry, energy, real estate, agribusiness, gas, and media business. Enterprises in 11 countries in Europe and Central Asia that are part of Group DF employ over 100 thousand people.

On March 13, 2014, the Austrian police arrested Dmitry Firtash in Vienna at the request of the FBI. Austrian Federal Police have reported that Firtash has been wanted since 2006 and is accused of bribery and the creation of a criminal community. The United States accused Firtash of giving a large bribe in exchange for a license to develop titanium deposits in India. In June 2015, 46 real estate properties included in Firtash’s assets were arrested in Ukraine. The Ukrainian authorities accused him of causing $273 million damage to the state by his companies. The lawsuit lasted several years, and in June 2019, the Austrian Supreme Court authorized the extradition of Firtash to the United States.

Cooperation with an international criminal group, promoting the interests of the Kremlin in Ukraine.

Dmitry Firtash has long been considered one of the most non-public and mysterious oligarchs in Ukraine. Largely, the reluctance to attract the attention of the press was caused by his extensive contacts with Simon Mogilevich, a well-known Russian-Ukrainian-Hungarian mafia boss, considered the “boss of bosses” among the Russian mafia in the world and is wanted by the FBI. The ties between Firtash and Mogilevich have been traced since the 1990s, but have become public domain after the Wikileaks report. At the turn of the century, Firtash participated in the food for gas program through the Israeli Highrock Properties, controlled by Mogilevich. Subsequently, Firtash explained to the American ambassador that “in the 1990s, he needed the approval of Mogilevich to do business.” However, the American authorities and several independent publications continue to believe that Firtash continued to represent Mogilvich in Ukraine.

Reportedly, one of the reasons for the creation of RosUkrEnergo in 2004 as an intermediary for Gazprom in transporting Turkmen gas through Russia was Firtash’s attempt to cover up the ties between his previous company Eural TransGas and Mogilevich. In January 2008, Mogilevich was arrested in Moscow on a case of tax evasion on a particularly large scale through the Arbat Prestige company. Firtash, along with Mogilevich, was one of the actual owners of Arbat Prestige. The arrest of Mogilevich could be only an excuse for removing the businessman and RosUkrEnergo as an intermediary in the sale of natural gas and for getting Gazprom access to the Central Asian gas market.

There is no doubt that Firtash has many years of strong ties with the Kremlin. He is one of the donors of the pro-Russian opposition in the Ukrainian parliament, he has assets in the annexed Crimea and the Russia-occupied part of Donbas. During the Euromaidan, his Inter TV channel took the side of the Yanukovych government, and to this day adheres to a position complementary to the Kremlin. Attorney General Jeff Sessions argued that Firtash acted as the “direct agent of the Kremlin” in the scheme to receive money from natural gas between Gazprom and Ukraine. The prolonged process of Firtash’s extradition to the United States suggests that he has something to tell American investigators, but this will jeopardize the positions of many financial and political players in Ukraine and will be able to open the curtain on the backstage ties between international crime, Ukrainian elites, and the Kremlin. The accomplishment of this justice will mean a blow to Putin’s interests in Ukraine and will become yet another evidence of the mafia nature of the Putin regime.