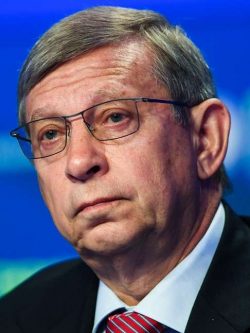 Chairman and Majority Shareholder of the AFK Sistema

YEVTUSHENKOV, Vladimir Petrovich (b. 1948) graduated from Moscow Institute of Chemical Technology in 1973 and the Faculty of Economics of Moscow State University in 1980. In 1975-1982, he worked as the head of the workshop, deputy director, chief engineer of the Karacharovsky plastic plant. In 1982, he became chief engineer and deputy director of the Polimerbyt plant. He was a member of the Communist Party. At one of the meetings at the USSR Ministry of Chemical Industry, Yevtushenkov met with the head of the Office of Science and Technology and a future Mayor of Moscow, Yuri Luzhkov, and the younger sister of Yevtushenkov’s wife, Elena Baturina, later married Luzhkov.

In 1987, he was appointed head of the Technical Department of the Main Directorate for Science and Technology of the Moscow City Executive Committee. In 1990, after the election to the Moscow City Council, Luzhkov became chairman of the Moscow City Executive Committee, and Yevtushenkov, in turn, took over as chairman of the Moscow City Committee for Science and Technology. In 1993, Yevtushenkov, together with partners, created Sistema, a joint-stock financial corporation (AFK), which included enterprises established by the Moscow City Executive Committee. The company was engaged in finance, construction, reconstruction of real estate, and in 1994 turned its attention to telecommunications. In 1994, Sistema Telecom acquired a controlling stake in Vimpelcom OJSC, and then, together with MGTS OJSC, established Center TeleSystems. MGTS handed over to AFK trust management of most of its subsidiaries, in particular, Moscow Cellular Communications, Interregional Transit Telecom, Mobile TeleSystems (MTS), etc. In 1997-1999, Yevtushenkov was chairman of the board of TV Center.

In 2014, Yevtushenkov was accused of illegally acquiring a controlling stake in Bashneft oil company and he got under house arrest. As a result, the government took the shares back and sold it to Rosneft. In December 2017, Sistema signed an amicable agreement and paid Bashneft 100 billion rubles, but Yevtushenkov’s wealth has since been steadily declining. According to the Forbes rating, his fortune is estimated at $1.5 billion (2019), while he owned $9 billion in 2014. Vladimir Yevtushenkov was the sponsor of Luzhkov’s election block Fatherland in the Duma elections in 1999. He has been a member of the board of the Russian Union of Industrialists and Entrepreneurs since 2000. He has been a member of the board of the Chamber of Commerce and Industry of the Russian Federation since 2002, a member of the Government Commission on Science and Innovation Policy, the Council on Science and High Technologies under the President of the Russian Federation, the Council on Competitiveness and Entrepreneurship under the Government of the Russian Federation and the National Corporate Governance Council.

Relations with organized criminal groups, mediation of financial support for the associates of the former President of Ukraine Viktor Yanukovych.

Viktor Tamm (Spivakovsky), known as Arnosha, was one of the leaders of the Solntsevskaya gang. In 2017, he suddenly died when he was under house arrest in Spain and was waiting for the start of the money laundering trial. He was a shareholder of AFK Sistema and deputy director of the Beijing Hotel complex in Moscow. The gang’s ties with AFK Sistema have been traced since the 1990s and continue to this day. In the mid-90s, during the trial of the leader of the group, Sergei “Mikhas” Mikhailov, in Switzerland, the FBI agent Robert Levinson as a witness on the prosecution side named ex-president of AFK Sistema Evgeny Novitsky one of the treasurers of the Solntsevskaya group. According to media reports, Vladimir Yevtushenkov has repeatedly met with Mikhas. At the interrogation after being detained in Marbella on September 28, 2017, Tamm stated that he had stayed in Spain with Oleg Kuznetsov, who was arrested with him. Oleg Kuznetsov was the administrator of the Beijing Hotel in 2002–2016, and since 2016, the Cosmos Hotel in Moscow. Both hotels are the property of AFK Sistema. The sudden death of Arnosha may not be accidental. A similar trial of the Tambov gang in Spain had surfaced very interesting revelations about the connections of the criminal world with Russian high-ranking political and security officials.

In Ukraine, AFK Sistema-owned bank is suspected of withdrawing billions of euros for Yanukovych’s team after the ex-president’s escape to Russia. The East-West United Bank, registered in Luxembourg, was a “vacuum cleaner” for transferring money from Ukraine. The bankers close to the family of Viktor Yanukovych used this bank to withdraw assets. For this purpose, they opened correspondent accounts and transferred gigantic amounts of money on them. When a Ukrainian branch started having problems, money was debited to offshore companies affiliated with management. According to the Ukrainian Deposit Guarantee Fund, at the end of 2015, $227 million was withdrawn from Ukraine through the East-West United Bank. However, soon the Ukrainian authorities found a whole group of Ukrainian banks that withdrew more than 4 billion euros to the accounts of the Luxembourg bank and its offshore companies.

It’s hard to say whether Sechin’s attack on Yevtushenkov in 2014 had an intention to force him to launder money of Yanukovych or to please the growing appetites of the head of Rosneft to concentrate the country's oil industry in one hand. As Yevtushenkov said, “You always lose if you play with the government.” You lose if you play with the Putin regime by definition. Yevtushenkov agreed with his role as an intermediary between the authorities, mafia and big business at the cost of most of his fortune. This situation is affecting the already unfavorable business climate in Russia and gives an obvious signal to investors, who are increasingly doubting the real inviolability of property and the rule of law in Russia.

Profile: Who Is the Arrested Billionaire Vladimir Yevtushenkov?

Even Loyalty No Guarantee Against Putin