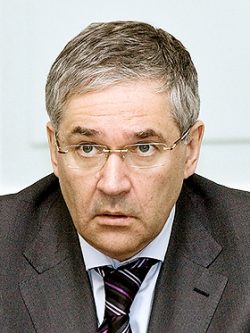 CEO of the All-Russian State Television and Radio Broadcasting Company, VGTRK (2004 - to date)

DOBRODEEV, Oleg Borisovich (b. 1959 in Moscow) is a Russian media manager, CEO of the government-owned All-Russian State Television and Radio Broadcasting Company (VGTRK). Member of the Presidential Council on Culture and Art. Member of the Public Council at the Ministry of Defense of the Russian Federation. In 1981, he graduated from the History Department of Moscow State University. After graduation, he worked as a researcher at the Institute of the USA and Canada of the USSR Academy of Sciences. In 1982, he studied at the graduate school of the Institute of the International Labor Movement. Between 1983 and 1990, he was an employee of the Central Television of the USSR State Television and Radio Broadcasting. He began his career as a junior editor, then was a correspondent, commentator on the Vremya newscast and deputy editor-in-chief of the Information Editorial Board.

His son, Oleg, is the General Director of Mail.Ru Group (the main media asset of the Russian oligarch Alisher Usmanov).

Active participation in aggressive state propaganda of the Putin regime, that is, in the creation and dissemination of intentionally distorted information in the interests of the political leadership of the Russian Federation, deceiving people and instilling aggression in the public opinion, an atmosphere of hatred and political intolerance.

The main basis for the accusation of Dobrodeev is his official position as the head of the largest state-owned media holding, specially created and used for many years for propaganda purposes. He consciously exchanged his high reputation in the professional media environment for absolute loyalty to the ruling regime, becoming one of its accomplices and beneficiaries. Oleg Dobrodeev became the initiator and main creator of the state TV channel Rossiya-24. Already at its launch in 2006, most experts assumed that the channel was created for political propaganda to ensure the desired result of the “party in power” in the 2007 and 2008 elections. This assumption turned out to be true. The channel quickly became and remains one of the main mouthpieces of state propaganda, effectively fulfilling the task of strengthening the Putin regime and providing information support for its aggressive domestic and foreign policies, including military operations in Georgia, Ukraine, and Syria.

The Rossiya-24 TV channel has become one of the most effective means of the so-called hybrid information war against international law and political opponents unleashed by the Putin regime, a symbol of replacing journalism with a mixture of propaganda, lies, slander, and bullying.

On February 23, 2014, on the air of the Rossiya-24, the guest, Alexander Prokhanov, said that Jews in Ukraine “bring the second Holocaust closer with their own hands,” and the host Evelina Zakamskaya added that “they brought the first one closer in the same way.” Commenting on the proposal of several members of the Duma to immediately dismiss the presenter, the Secretary of the Union of Russian Journalists Pavel Gutiontov said that it would be more correct to punish not the presenter, but the people who determine the channel’s policy. “What’s happening on television is, of course, unacceptable, it’s a symptom, I would say, of a pseudo-patriotic revelry, which is pouring from the television screen. But I think... it would be right to punish not the host, but those who determine the policy of this channel.”

Latvia, Lithuania, Ukraine, and Moldova repeatedly suspended the broadcasting of the RTR-Planet TV channel (the foreign division of Rossiya-24) due to allegations of incitement of hatred and calls to restore the USSR with all former territories. Since March 1, 2014, the Rossiya-24 TV channel received broadcast frequencies for broadcasting in the occupies Crimea and Sevastopol.

In April 2015, Dobrodeev, along with NTV CEO Vladimir Kulistikov, head of the Russia Today news agency Dmitry Kiselev, and propaganda journalists Arkady Mamontov, Konstantin Semin, Vladimir Solovyo, Andrei Karaulov, and Alexei Pushkov, got into the Nemtsov’s List. This is a list of propagandists. who, according to the leader of the opposition party RPR-PARNAS Mikhail Kasyanov, seriously violated human rights and took part in inciting hatred and reprisal against [the assassinated politician] Boris Nemtsov on TV channels.”

On May 27, 2016, Oleg Dobrodeev, along with other leaders of the major Russian state and non-state media, was included in the list of personal sanctions by decree of the President of Ukraine. Oleg Dobrodeev was accused of “the actions that create real and/or potential threats to national interests, national security, sovereignty and territorial integrity of Ukraine contribute to terrorist activities and/or violate the rights and freedoms of human and citizen, the interests of society and the state, lead to the occupation of the territory, expropriation or restriction of property rights and full implementation of their rights and freedoms by citizens of Ukraine.”

On July 23, 2018, at the opening of the VGTRK branch in the occupied Crimea, Oleg Dobrodeev said: “If we say specifically that the VGTRK television tightens the country, then today, of course, this is the last region of Russia in which our company appeared. And this is really the main element in this information chain.” And he clarified that now we can talk “about the final informational return of Crimea to the Homeland.” It is noteworthy that Dobrodeev’s deputy director-general of VGTRK is one of the most odious Russian propaganda journalists, Dmitry Kiselev, the head of the Russia Today agency, the host of the Vesti Nedeli program.

Indirect evidence of Dobrodeyev’s complicity in the crimes of the Putin regime are appointments to high posts and receiving the highest state awards, including the orders “For Merit to the Fatherland” (IV and III degrees) and the medal “Participant in a military operation in Syria” (awarded April 17, 2016, “for high professionalism and objectivity in covering the military operation in the Syrian Arab Republic”).