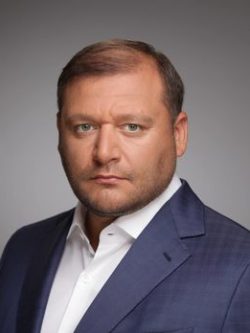 Member of the Ukrainian parliament

DOBKIN, Mikhail Markovich (b. 1970 in Kharkiv) after receiving secondary education, helped his father run a family business, one of the first private enterprises in the city. In 1988-1990, he served in the Soviet Air Defense Forces of the Kyiv Military District. From 1993 to 2002, he was running companies involved in wholesale trade in fuels and lubricants. In 1998, he was elected to the Kharkiv City Council. In 2002, Dobkin received higher education and a law degree from the National University of Internal Affairs. In 2004, he began his studies at the Kharkiv National Economic University with a major in international economics.

In 2002, Dobkin became a member of the Ukrainian parliament. Having been elected as a non-partisan, he changed five factions and groups in three years: United Ukraine, the Democratic Initiatives group, the Center group, the Social Democratic Party of Ukraine, and the Party of Regions. In the 2004 presidential election, Dobkin was a confidant of Viktor Yanukovych in Kharkiv. In 2005, he joined the Party of Regions, becoming a member of the party’s Political Council.

On March 26, 2006, Dobkin became the mayor of Kharkiv, and the head of his election campaign, Gennady Kernes, who had criminal connections, became the Secretary of the City Council. Being the mayor, Dobkin was repeatedly involved in scandals, including charges of bribery, fraud, and cooperation with criminals. His main opponents were Governor Arsen Avakov and businessmen Alexander Feldman and Alexander Protas. At the beginning of 2008, the Security Service of Ukraine brought to court a criminal case on embezzlement of state funds in the Kharkiv City Council, in particular, inappropriate distribution of communal property and urban land. However, it did not come to a criminal case because of the active opposition of the members of the Party of Regions and the Communist Party of Ukraine.

In March 2010, President Yanukovych appointed Mikhail Dobkin as Chairman of the Kharkiv Regional State Administration, i.e., the Governor of Kharkiv Region. He held this post until March 2014. In October 2010, Russian President Dmitry Medvedev awarded Mikhail Dobkin the Order of Friendship “for his great contribution to the development and strengthening of friendship and cooperation between the Russian Federation and Ukraine.” In the 2014 parliamentary elections, Dobkin was elected to the Verkhovna Rada as a member of the pro-Russian Opposition Bloc, the heir to the Party of Regions. In the fall of 2017, he quit the party, and in February 2018 announced his new Christian Socialists party.

1. Justification of the crimes of the Berkut riot police regiment during the Euromaidan and the Revolution of Dignity.

Mikhail Dobkin justifies the actions of the Ukrainian Berkut riot police regiment, which are suspected of killing activists. In 2013-2014, he sharply criticized the protesters, calling them “freaks,” “clowns,” and was outraged by the demolition of the Lenin monument in Kyiv, and organized a fundraiser to restore it. On January 30, 2014, he appeared at a session of the Kharkiv Regional Council in a black Berkut T-shirt and organized fundraising for the treatment of police officers, many of whom took part in the beatings and killings of pro-European activists. After several years and criminal cases against Berkut officers, Dobkin continues to demonstrate his support for the criminal actions of the special forces. “I became a bigger opponent of Maidan than I was in 2013 and 2014. I would support Berkut more today than I did then. I would not only wear the Berkut T-shirt but also a Berkut uniform,” he said in an interview with the Newsone TV channel in November 2018.

2. Attempts to infringe on the territorial integrity of Ukraine with the support of officials of the Russian Federation.

On February 1, 2014, Mikhail Dobkin was elected co-chair of the Ukrainian Front Public Union, which was the organizer of the separatist Congress of Deputies of the Southeastern Regions of Ukraine, the Crimea and Sevastopol, held in Kharkiv on February 22, 2014, on the day of the victory of the Revolution of Dignity in Kyiv and the escape of the president Yanukovych to Russia. The evidence of the inspiration of the “congress” by the Russian authorities was the arrival of 7 high-ranking Russian officials: the head of the State Duma committee on international affairs Alexei Pushkov, the senator from the Pskov region Mikhail Margelov, the governor of the Belgorod region Yevgeny Savchenko, the governor of the Rostov region Vasily Golubev, the governor of the Voronezh region Alexander Gordeev, Governor of the Bryansk region Nikolai Denin, and Consul General of the Russian Federation in Kharkiv Sergey Semenov. The Congress called into question the legitimacy of the decisions of the Verkhovna Rada of Ukraine and stated that the southeastern self-government bodies are taking responsibility for ensuring constitutional order on their territory.

At a rally in Kharkiv on February 24, he announced his intention to run for president in the May 25, 2014 elections. On February 26, he wrote a letter of resignation, and on February 27, the Security Service of Ukraine launched an investigation against Dobkin under part 2 of article 110 of the Criminal Code of Ukraine (“An encroachment on the territorial integrity and inviolability of Ukraine, committed by a representative of the authorities”). On March 10, he was summoned for interrogation to Kyiv. After interrogation at the Attorney General’s office, Dobkin was arrested. On March 11, the court imposed a “partial” house arrest on him for two months after the oligarch Rinat Akhmetov’s request. On April 3, 2014, house arrest was replaced by a “personal obligation.” On August 30, 2014, Mikhail Dobkin’s lawyer, Yulia Pletneva, announced the closure of the criminal case due to the lack of corpus delicti in his actions. In the May 25 presidential election, Dobkin, supported by the Party of Regions, received 3% of the vote.

Controversial statements and a criminal case did not prevent Dobkin from being elected to the Verkhovna Rada from the successor of the Party of Regions, the Opposition Bloc. Ironically as it may sound, he became a member of the committee on state-building, regional politics, and local self-government. In July 2017, the members of the Verkhovna Rada voted to remove Dobkin’s parliamentary immunity and bring him to criminal liability for his activities when he had been the mayor of Kharkiv. According to the investigation, he helped his associates, the heads of construction companies to get valuable land plots. At the same time, those companies were registered not as enterprises, but as housing cooperatives, which allowed them not to pay land tax. The damage estimated at more than 200 million hryvnias.

However, Dobkin’s position complementary to the Kremlin on all major political issues did not save him from being put on the Russian sanctions list in December 2018. Ukrainian analysts say that the reason for this is the rejection of Dobkin and several other leaders of the Opposition Bloc from participating in a political alliance with the godfather of Vladimir Putin, Viktor Medvedchuk, on the eve of the presidential election in Ukraine. At the same time, others do not exclude that in this way, taking into account the sharply negative attitude of the majority of Ukrainians towards the Russian leadership, the Kremlin helps those politicians to save their reputation.