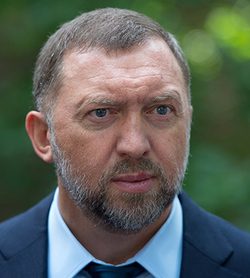 Chairman of the Supervisory Board of Basic Element Company

DERIPASKA, Oleg Vladimirovich (b.1968) is a Russian oligarch, one of the richest people in Russia. Born in Dzerzhinsk, Nizhny Novgorod Oblast and grew up in Ust-Labinsk, Krasnodar Krai, in 1993 he graduated from Moscow State University with a major in physics. In 1996, he received a master's degree from the Plekhanov University of Economics. After graduation, he organized a company that specialized in metal trading. Almost all the profits from this business were spent on the purchase of shares in privatized enterprises. In 1994, the 26-year-old Deripaska became the CEO of the Sayanogorsk Aluminum Plant (Khakassia). In 1997, he created the Siberian Aluminum group, based on the Sayanogorsk Aluminum Plant. In 1997-2001, he was President of the Siberian Aluminum group (since 2001 - the Basic Element), which later united several leading enterprises in the Russian aluminum industry.

In 2000, Deripaska created the Rusal holding, combining aluminum and alumina assets of Siberian Aluminum and Sibneft. Since 2012, he has been the Chairman of the Supervisory Board of Basic Element. Until 2018, he was the president of En+ Group, a Russian energy company, and United Company Rusal, the second-largest aluminum company in the world. He was married to Polina Yumasheva, step-granddaughter of the first Russian President Boris Yeltsin and daughter of Valentin Yumashev, Yeltsin's close advisor. Reportedly, they divorced in 2018. In 2017, Deripaska purchased Cypriot citizenship.

Corruption, economic crimes, meddling in the affairs of a foreign state, participation in organized crime.

Law enforcement authorities and the courts of different countries have repeatedly suspected Oleg Deripaska in participating in the activities of organized criminal groups and having close relationships with mafia bosses:

In 2006, Deripaska's former partner, Mikhail Chernoy, filed a lawsuit against Deripaska. He claimed compensation for the allegedly owned 20% stake in Rusal. According to Chernoy, he transferred this stake to Oleg Deripaska, and Deripaska promised to buy it back within three to five years. However, he did not keep his promise. In the court, the representative of Chernoy showed evidence that Deripaska had friendly and partner relations with the leaders of the organized crime groups: Anton Malevsky (the leader of the Izmailovo-Golyanovo group, died in 2001) and Sergey Popov (the leader of the Podolsk organized crime group).

In 2006, the U.S. Federal Bureau of Investigation (FBI) blocked a US visa issued for Deripaska due to suspicions of having links to organized crime.

In 2007, German prosecutors also suspected Oleg Deripaska of having links to the Izmailovo criminal group. The prosecutor’s office accused him and his three accomplices of laundering about 8 million euros by buying property in Stuttgart. Deripaska, according to the Stuttgart prosecutor’s office, was associated with the Izmailovo organized crime group in the 1990s. During the redistribution of the aluminum industry, members of the criminal group intimidated or even physically eliminated Deripaska's competitors. They bribed courts and carried out an attempted murder of the vice-governor of the Kemerovo region. As a result, Deripaska managed to gain control over the metallurgical plant in Novokuznetsk.

In 2009, Spanish law enforcement authorities suspected Oleg Deripaska, as well as his two former partners, Iskander Makhmudov and Mikhail Chernoy, in money laundering. The court documents stated that businessmen received income from the aluminum industry, which was established “through racketeering, fraud, and murder”.

Oleg Deripaska is also suspected of corruption and bribery of officials:

In 1998, Deripaska established good relations with the Samara governor Konstantin Titov. With his support, Deripaska managed to take possession of the Samara Metallurgical Plant, the second-largest enterprise of the Siberian Aluminum group. Titov later assisted Deripaska in acquiring Aviakor JSC, which used to be one of Russia’s leading aviation enterprises.

One of Oleg Deripaska’s influential partners is Anatoly Chubais. In 1999, Chubais, being the head of RAO UES (electric power monopoly) at that time, facilitated the transfer of the Novokuznetsk Aluminum Plant assets to Deripaska through lawsuits against the plant for electricity debts.

According to the testimony from the German prosecutor’s office investigation, in the 1990s, “Oleg Deripaska had close contacts with the FSB and the police. He knew then-head of the FSB Valery Pechenkin (in 1997 he was appointed deputy director of the FSB and head of the Counterintelligence Department. Upon resigning in 2000, he shortly became a Deputy Director of Siberian Aluminium). Close contacts with the FSB and the police were of strategic importance to the Deripaska group. Deripaska used these contacts to keep an eye on business partners, wiretap their phones, conduct outdoor surveillance, receive their documents. Thus, they could find out the weaknesses of entrepreneurs to carry out extortion more effectively”.

In 2008, The Sunday Times claimed that Peter Mandelson, former European Commissioner for Trade and the British Minister of Business and Entrepreneurship, had repeatedly met with Deripaska on his yacht. Supposedly, Mandelson used his official position and provided services for Deripaska by taking measures to reduce tariffs on the import of aluminum foil into the EU.

In February 2018, Alexei Navalny’s Anti-Corruption Foundation (ACF) published an investigation into the corruption ties of Oleg Deripaska and Deputy Prime Minister Sergei Prikhodko. The investigation claimed that the official and Deripaska were negotiating on an entrepreneur’s yacht off the coast of Norway. The fact that one of the leaders of the government was resting on a businessman’s yacht and then, probably, took advantage of his plane, ACF considers as a bribe and a hidden form of corruption.

A number of media, as well as foreign authorities, suspect Deripaska of gross interference in the affairs of foreign states:

According to the Associated Press, from 2004 to 2015, former US President Donald Trump campaign manager Paul Manafort worked secretly for Russian billionaire Oleg Deripaska to advance the interests of Russian President Vladimir Putin in the West. According to the agency, Manafort signed a contract with Deripaska in 2006 with an annual paycheck of $10 million. In September 2017, The Washington Post announced that two weeks before the election of Trump in 2016, Paul Manafort offered Deripaska personal advice on the election in the US.

The Wall Street Journal described the work of Manafort on a Russian businessman from 2004 to 2015 in detail. Their political cooperation concerned Ukraine, Georgia, and Montenegro. Sources reported that Manafort’s company DMP helped Deripaska in organizing the return of pro-Russian politician Igor Giorgadze to Georgia in 2004. In Ukraine, Manafort's consultants helped Deripaska to collect information for the “Russia-friendly” party. In Montenegro, the Manafort company promoted the commercial interests of Deripaska, and supported a referendum on Montenegro's membership in the European Union.

In April 2018, the United States imposed sanctions on Oleg Deripaska and 23 other Russian tycoons and officials. The statement of the United States Department of the Treasury said that Deripaska “ha[d] been accused of threatening the lives of business rivals, illegally wiretapping a government official, and taking part in extortion and racketeering”. In January 2019, the U.S. Treasury lifted the sanctions on companies formerly controlled by Deripaska. Sanctions on Deripaska himself remained in effect.

Manafort’s Russia connection: What you need to know about Oleg Deripaska.

Manafort offered to give Russian billionaire ‘private briefings’ on 2016 campaign