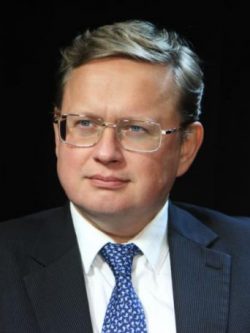 Russian economist and publicist; TV and radio host, head of the Institute for Globalization Issues, Advisor to the Head of the Fair Russia Faction in the State Duma.

DELYAGIN, Mikhail Gennadyevich (b. 1968 in Moscow) graduated from the Moscow State University with a major in economics in 1992. In 1990–1993, he was an analyst at the group of experts of the President of Russia Boris Yeltsin. In 1994, he became the chief analyst of the Analytical Department of the President of the Russian Federation. In 1997-1998, he was an Advisor to the Deputy Prime Minister - Minister of Internal Affairs Kulikov and First Deputy Prime Minister Nemtsov. In 1998, he headed the Institute for Globalization Problems. Between 2002 and 2003, he was an Assistant to Prime Minister Mikhail Kasyanov. In 2004-2006, he was the Chairman of the Ideological Council of the Rodina party. In 2006–2007, he was a Member of the Presidium of the Congress of Russian Communities and the Other Russia Political Conference. In 2010, he headed the organizing committee for the creation of the political party Rodina: Common Sense. In 2016, he joined the Just Russia party. Since 2017, he has been an Advisor to the Head of the Fair Russia Faction in the State Duma.

Complicity in the propaganda of the Putin regime.

Until the mid-2000s, Delyagin was one of the most respected liberal economists who made a career as an adviser and assistant to senior officials in the Russian government. Then, for some time, he played the role of a loyal critic and even a “patriotic” oppositionist. After the crackdown of the protests of 2011-2012, he finally found himself on the pro-Kremlin side, firmly taking his place in a row of aggressive propagandists of the Russian authoritarian regime. Delyagin admitted that the key milestones for him were “The social measures Putin proposed in 2012 social measures which allowed the inhabitants of the Kremlin to emerge from the maelstrom into which Bolotnaya Square dragged leadership and the country” and, especially, Putin’s Valdai speech in September 2013, which “Divided his presidency in half and... for the West, it was a declaration of absolute incompatibility in values.”

“Ukrainian theme” plays a special and significant place in Delyagin’s propaganda. He is one of the most active and creative ideologists and activists of the powerful information war unleashed by the Putin regime against Ukraine. It is noteworthy that his propagandist activities coincided with the periods of intensification of military operations or their preparation, starting with the victory of Euromaidan and continuing with the occupation of Crimea and the escalation of the armed conflict in eastern Ukraine.

The key ground for the accusation is his numerous public statements, where he openly supported the aggressive foreign policy of Russia, incited hostility towards the USA, EU, Ukraine and generalized enemies in the form of “West” and “liberals.” Here are just a few of Delyagin’s vastly openly propaganda texts, written in the spirit of frantic militarism, xenophobia and hatred, published on his website and in Russian media:

03/10/2014: “Euronazis, who carried out a coup d'etat with direct support from the West (both politico-diplomatic and purely military), have almost destroyed the Ukrainian economy... The preservation of Crimea as a part of Ukraine, in any case, means control over it by the euronazis who carried out the Kyiv coup. This turns terror against the non-Tatar population of Crimea and the complete breakdown of relations between its communities into a matter of time.”

03/14/2014: “Ukrainian euronazis can organize terrorist attacks and attacks in Russian cities”: “Now they are frolic on the entire territory of Ukraine controlled by euronazis, but as the border is open they can carry out sabotage and terrorist activities on our territory and even carry out punitive expeditions to Russia... Tomorrow, March 15, liberals will gather in Moscow 50 thousand, or maybe even more hipsters, creatives and schizoids for an anti-war procession and a rally against Russian national interests and the beginning of the reunification of our country. What stops Banderovites armed to the teeth, who are the heroes of Russian liberals, for example, from blowing up a grenade in the crowd joyfully welcoming them, provoking the most powerful heart-rending liberal howl about, expressed in their language, “Putin’s bloody executioner regime” and that “The FSB is blowing up Russia again?”

05/21/2014: “My forecast: the South and the East [of Ukraine] will rise not for cultural and political reasons, like now Donetsk and Lugansk, but socio-economic reasons and they will create a new historical association from a dozen regions, the Novorossiya. It can liberate and denazify Kyiv and can force Russia to reunite with it, as, in fact, the Crimeans forced us to do so. But this is already the business of the next year.”

12/03/2014: “Now when the global business needs direct control over Russia's resources because of the crisis, and the Western states do not hide the desire to do this with the help of a coup, as in Ukraine, their assault infantry, the liberal clan, went on the attack... Vladimir Putin is accused of the consequences of liberal politics. Moreover, the liberals criticize him primarily for reunification with the Crimea.”

Like most Russian propagandists who hold the stance of great-power chauvinism, Delyagin periodically makes xenophobic and anti-Semitic remarks:

“Like many other owners of an “independent Ukraine,” the oligarchs who did not quit the power, Poroshenko appears in politics under a creative pseudonym: his natural last name is Waltzman... Information about his origin disappeared from Wikipedia not so long ago.” And considering that it, like other global “open” projects, is ultimately controlled by the most technologically advanced Americans, this “image cleanup” deserves serious attention.”

It is also noteworthy that Delyagin’s imperial rhetoric is often even more cynical and harsh than official, which allows the Kremlin to play the card of a “moderate statesman” against the backdrop of political “hawks.” Here is just one sample of this kind:

“Correctly emphasizing the will of the people and the referendum held, in contrast to Kosovo, the Russian Ministry of Foreign Affairs, stubbornly, as guerilla warriors during interrogation, is silent about the most important thing. The fact that as a result of the fascist coup in Kyiv, directly organized by the West, Ukrainian statehood as such simply disappeared. Accordingly, the principle of territorial integrity after the coup in Kyiv simply applies to anything. When a state is destroyed, including external intervention that is very obvious in Kyiv, a group of people on their land can establish a new state or join existing ones.”