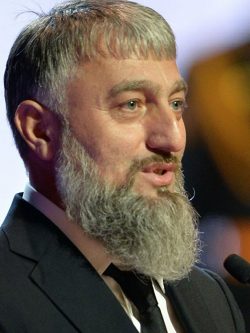 Member of the State Duma of the Russian Federation, member of the United Russia party, the closest associate of Ramzan Kadyrov.

Adam Delimkhanov was born on September 25, 1969, in the village of Benoy, Nozhai-Yurt District, Chechen-Ingush Autonomous Soviet Socialist Republic. In 1987-1989, Delimkhanov served in the Armed Forces of the USSR. Returning from the army, in the spring and summer of 1990, he worked for several months as a third-class locksmith in the Argunskoye repair and technical enterprise of the Chechen-Ingush Autonomous Soviet Socialist Republic. In 1990-1991, he performed the duties of a supplier of the Tesham enterprise of the Chechen Republic. Around the same time, he was engaged in the sale of cars. In 1994, he graduated from the Chechen-Ingush State University (now the Chechen State University). In 2004, he graduated from the Institute of Finance and Law in Makhachkala with a degree in jurisprudence.

After the First Chechen War, in the second half of the 1990s, Delimkhanov worked as a personal driver for the well-known field commander Salman Raduev, who became infamous during these years by seizing a hospital in Budennovsk in 1995 and attacking Kizlyar with hostage-taking in 1996. With the outbreak of the Second Chechen War in 1999, Delimkhanov found himself among the Chechens who went over to the side of the federal forces. From March 2000 to August 2003, he worked in the internal affairs bodies as an intern, then as an employee, and later as an inspector for the analysis and planning of the headquarters of a separate police company under the Ministry of Internal Affairs of the Chechen Republic for the protection of buildings of public authorities (security service head of the administration of Chechnya Akhmat Kadyrov).

In July 2014, the US Treasury Department imposed sanctions on Delimkhanov. They provide for the freezing of assets in the United States and a ban on commercial transactions with citizens of this country. The Treasury Department believes that Adam Delimkhanov "acted on behalf of or in the interests of a key member" of the transnational criminal group "Brotherly Circle" Gafur Rakhimov. In March 2019, the Foreign Affairs Committee of the US Congress approved a draft resolution on sanctions for the murder of Boris Nemtsov. The initiator of the investigation into the financial activities of the leader of Chechnya was Congressman Tom Malinowski. Delimkhanov is included in this package of sanctions, along with the head of the republic, Kadyrov, within the framework of which it is planned to introduce restrictive measures and check assets in Arab countries.

Numerous kidnappings, extrajudicial executions, and other violations of human rights in Chechnya, organizing the murder of Nemtsov, being the initiator of assassination attempts on Chechen oppositionists outside of Russia.

Kidnappings of public figures of Ichkeria

Adam Delimkhanov is the closest associate and "right hand" of Ramzan Kadyrov and is also famous for the nickname "Executioner" among the Chechens. And for good reason. In 2005, Doku Umarov, one of the leaders of the Chechen separatists, accused Adam Delimkhanov's subordinates from the "oil regiment" of kidnapping his 70-year-old father, 45-year-old brother, wife, and six-month-old child. Besides, Doku Umarov attributed to Delimkhanov's subordinates the kidnapping and murder of several close relatives of Abdul-Vahab Khusainov, the minister of the government of the unrecognized Republic of Ichkeria.

On November 18, 2006, Adam Delimkhanov personally led the operation to eliminate Lieutenant Colonel Movladi Baysarov, who was in conflict with then Chechen Prime Minister Ramzan Kadyrov, in the center of Moscow, a former field commander who, together with Akhmat Kadyrov, went over to the side of the federal forces, and subsequently led Highlander, the FSB operational-combat group. At the same time, according to Sulim Yamadayev, Adam Delimkhanov personally fired a control shot from a personalized pistol.

In April 2008, in an interview with the Rosbalt agency, Adam Delimkhanov accused the Yamadayev brothers of having links with Boris Berezovsky, saying: "The hand of London, promising great wealth, apparently, tightly squeezed the Yamadayevs, greedy for personal enrichment." In the same interview, Delimkhanov promised that Yamadayev "doesn't have long to sully the good name of the Chechen people." On April 5, 2009, the chief of police in Dubai, General Dakhi Khalfan Tamim named Adam Delimkhanov among four suspects of involvement in the murder of ex-commander of the Chechen battalion Vostok, Sulim Yamadayev. According to General Tamim, one of the detained suspects said that the weapon for the murder - a gold-plated pistol of the Makarov system was handed over to him by Delimkhanov's bodyguard. On April 27, 2009, Adam Delimkhanov was put on the international wanted list by Interpol on suspicion of the murder of Sulim Yamadayev.

In 2017, during the trial of the murder of oppositionist Boris Nemtsov, Adam Delimkhanov's brother, Alibek Delimkhanov, was interrogated as a witness. He was summoned to court because he is the commander of the unit where the natives of Chechnya served among the accused of attempting to assassinate the politician. The court rejected the petition of the victims to summon Adam Delimkhanov. The Delimkhanov brothers are related to Ruslan Geremeev, the commander of the battalion where the alleged killer of Nemtsov, Zaur Dadaev, served. Lawyers for the murdered politician's family believe that Geremeev should also be charged.

Control of Chechens outside of Russia

State Duma member Adam Delimkhanov is in charge of Chechen diasporas abroad, including Turkey, Azerbaijan, Georgia, the United Arab Emirates, Jordan, Austria, Norway, Finland, Poland, France, and Germany. Methods for the introduction of control in the diaspora are notorious enough. Chechens living in these countries regularly come across both facts of threats against them and direct examples of the implementation of these threats, as in the case of Sulim Yamadayev. This is especially true for Chechens — members of the LGBT+ community who are forced to flee Russia. During Delimkhanov's meeting with representatives of the Chechen diasporas at the end of 2019, he called for the identification of Chechens around the world who do not want to follow "the path of Akhmat Kadyrov" and lead a "dishonoring Chechen people" lifestyle.

“You all know who is behaving inappropriately, who is doing what,” Delimkhanov addressed the representatives of the Chechen diasporas. “You will tell them: ‘Enough, you have done enough things, stop or we will report to the authorities of Chechnya and hand you over to them’... We, the people, must each bear responsibility for our ‘compatriots’ in other lands and stop them..”. “I tell you, those who live in Europe, in America, in Canada — stop such people! — called the deputy Delimkhanov. — According to the law with our traditions and customs, resolve their issue. Whoever decides this, we will praise you, because we love our religion and our traditions.”