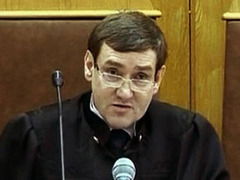 On December 30, 2010, Victor Danilkin passed a knowingly unjust and politically motivated sentence in a trumped-up criminal case against former Yukos executives Mikhail Khodorkovsky and Platon Lebedev under Articles 160 and 1 of Article 174 of the Criminal Code of the Russian Federation and convicted them to 13.5 years in prison. As part of the collegium, he also passed a deliberately unjust verdict on the fabricated case, sentencing Elena Biley and Osman Pliev to a long term of imprisonment.