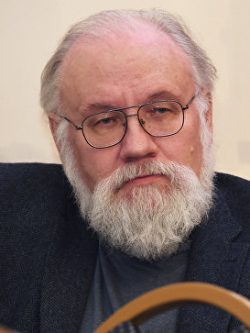 CHUROV, Vladimir Yevgenyevich (b. 1953 in Leningrad) graduated from the Faculty of Journalism in 1973, and the Faculty of Physics of Leningrad State University in 1977. Until 1991, he worked at the Integral Experimental Design Bureau of Aerospace Equipment at Leningrad State University. From 1982, he was a member of the Communist Party of the Soviet Union until its ban in 1991. In 1990, Churov was elected to the Leningrad (St.Petersburg) legislative council. Already in 1991, he was invited to work in the Committee on Foreign Relations in the Administration of St. Petersburg, which was then headed by Vladimir Putin. In 1995, Vladimir Churov became deputy chairman of the committee, the head of the international cooperation department of the Administration of St. Petersburg. In 1996, after the defeat of Sobchak in the 1996 gubernatorial election and the departure of Putin from the city administration, Churov retained his position on the committee.

In the summer of 2003, he unsuccessfully ran to the Federation Council from the Leningrad Region. However, already in December of that year, Vladimir Churov was elected to the State Duma on the federal list of the Liberal Democratic Party (LDPR), not being a member of this party. In the lower house of parliament, he took the post of deputy chairman of the committee for relations with the Commonwealth of Independent States (CIS) and compatriots. During this period, he also observed presidential and parliamentary elections in the CIS countries. In March 2007, Vladimir Churov was elected to the Central Election Commission (CEC) of the Russian Federation from the State Duma on a non-alternative basis. The next day, he was elected chairman of the CEC. In 2011, he was re-elected head of the CEC.

The name of Vladimir Churov became a household word due to the accusations of organizing a large-scale system of election fraud. Recorded cases of gross violations of the electoral rights of citizens led to all-Russian protests in 2011-2012. In 2016, Churov was not included in the new composition of the CEC, and Ella Pamfilova took his place. In the same year, he was appointed special ambassador of the Ministry of Foreign Affairs of the Russian Federation, and in 2019 he was awarded the rank of ambassador extraordinary and plenipotentiary. Vladimir Churov was awarded the Orders For Merit to the Fatherland, Friendship, and Alexander Nevsky. By conviction, according to an interview with Echo Planety magazine, he considers himself a monarchist-communist.

Complicity in the usurpation of power, falsification of elections, a gross violation of the electoral rights of citizens.

Churov, a direct subordinate of Putin since the early 1990s, claimed that “the first law of Churov: Putin is always right.” True to this creed, he has become a symbol of dishonest elections, fraud, and the denial of obvious documented facts. He was appointed head of the Central Election Commission in 2007, on the eve of the elections to the State Duma and the president. Unlike previous elections, these were held according to new legislation, which severely limited the registration and participation of parties, increased the entrance barrier, and also complicated the procedure for registering presidential candidates. These elections were so important for the Kremlin as they preceded the first phase of the “castling” - the election of Medvedev as president and Putin's safe departure for the post of head of government. It is noteworthy that immediately before Churov’s election to the CEC, the Duma adopted an amendment to the electoral law, according to which members of the Central Election Commission were no longer required to have an academic degree in law or any legal training.

Observers noted numerous rigging in the 2007 and 2008 elections, but this did not lead to mass protests, as there was a social expectation of renewal and democratization of the political system with the election of Medvedev. However, in the fall of 2011, Putin decided to return to the presidency, and the legislation on parties was further tightened, which limited the representation of parties only to those which collaborated with the Presidential Administration. At the same time, dissatisfaction with the ruling United Russia party grew, which began to be popularly called the “party of crooks and thieves.” In such a situation, it became obvious that the authorities were preparing unprecedented falsifications in favor of the ruling party.

Participants in a widespread public campaign of independent observers across Russia were able to document many violations in the Duma elections on December 5, 2011. They shot hundreds of videos and filed thousands of police reports. The scale of violations in those elections testified to a targeted campaign led by the Central Election Commission and federal authorities. The most popular types of violations were ballot box stuffing with votes for United Russia, organized voting by state employees several times at different polling stations (“carousels”), rewriting of voting protocols in favor of the ruling party, removal of observers and media from polling stations, administrative pressure on voters. In regions where there were virtually no independent observers, in particular, the republics of the North Caucasus, United Russia and Putin received over 90% of the vote. Vladimir Churov called the allegations of election fraud in the North Caucasus “fabrications of our enemies.”

This is not a joke: Vladimir Churov indeed, in the spirit of Soviet and Putin politicians in the international arena, responds to well-founded allegations of human rights violations by referring to the “conspiracy of enemies.” On December 7, 2011, Churov said: “On the Internet now there is a lot of rubbish about violations. Even before election day, I knew about several fake “election commissions” in the apartments where they shot the “movies.” I think we will see them again.”

The testimony of Boris Nadezhdin, member of the Political Council of the Just Cause Party: “It is clear that he personally did not throw out packs of ballots for United Russia. But it is he who is responsible, firstly, for the personnel of all election commissions (he appoints them vertically), and secondly, for stopping and changing the data of Gas-Vybory (electoral process software). Technical administrators are his employees. [...] There are symbolic figures. Churov became such a figure. Unlike many others, I understand in detail how he did all this falsification. It is his fault and partly Valery Kryukov’s (member of the Central Election Commission from United Russia). They are well aware of what really happened. [...] everyone understands that the elections, for example, in Moscow and St. Petersburg are openly rigged. Churov knows this, and Putin, and so on.”

On December 10, 2011, one of the demands of the resolution of the dozens of thousands of protestors on Bolotnaya Square in Moscow against the falsification of the parliamentary elections was “Churov’s resignation and investigation of his activities.” The same demand was confirmed at a rally on Sakharov Avenue on December 24. However, Churov safely retained his office and managed to participate in the organization of voting in the annexed Crimea. But, since he became too toxic for the Kremlin, he was later replaced by Ella Pamfilova, who had a reputation as a more “liberal” official and was formerly human rights ombudsman in Russia. However, the Churov methods continue to be widely used in elections in Russia, which was demonstrated by the scandalous elections in Moscow, St. Petersburg, and other places in September 2019. We have to admit that the institution of fair elections in Russia has been destroyed, and the authorities have managed to adjust to each new electoral cycle in such a way as to minimize competition and the prospect of a peaceful change of power. Having closed the possibility of political changes through elections, the Kremlin leaves the real opposition with no choice but to look for other ways or wait for the natural collapse of the existing system.