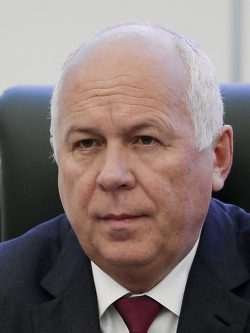 Director-General of the State Corporation Rostec (2007 — to date), Member of the Supreme Council of the United Russia Party

CHEMEZOV, Sergei Viktorovich (b.1952) is a current Director-General of the State Corporation Rostec and one of the closest associates of Vladimir Putin. Born in Siberia, he majored in engineering and completed his postgraduate education at the Military Academy of the General Staff of the Armed Forces. In 1983, he was sent to East Germany to represent the “Luch” Research-Industrial Association and allegedly worked for the KGB. Residing in Dresden, he met Vladimir Putin and shared the same apartment block with the future Russian president. In 1989, Chemezov was appointed deputy general director of the Sovintersport foreign trade association. In 1996, following Putin, he started working for the Office of President Yeltsin. From 2000 to 2004 he was the First Deputy General Director, in 2004-2007 — General Director of Rosoboronexport — the major Russian arms exporter. In November 2007, Putin appointed him General Director of the State Corporation Russian Technologies (Rostec). He is a member of the Bureau of the Supreme Council of the ruling United Russia Party.

Chemezov is accused of illegal enrichment, corruption, and cronyism. Putin’s longtime friend runs a state-owned corporation, which includes 700 enterprises and employs at least half a million people. The Rostec Corporation, along with Gazprom and Rosneft, is one of the pillars of Putin’s control over the economy, and, consequently, Russian politics. Most of the military industry, mechanical engineering, aircraft and automobile manufacturing, the pharmaceutical market, as well as arms exports are in the hands of one person.

Here are just a couple of examples. In 2006, Sergei Chemezov seized control of the largest titanium producer in the world — the “VSMPO-Avisma” plant, with annual revenues of more than $1 billion. The owners of the company — Vladislav Tetyukhin and Vyacheslav Bresht — came under administrative pressure of the Presidential Administration and FSB and were forced to give up control over the enterprise. In 2016, Igor Borbot, the former head of the Far Eastern Center for Shipbuilding, and his partner Alexei Boytsov filed a lawsuit with the U.S. District Court for the Southern District of New York. Borbot and Boytsov accused Sergei Chemezov of illegally seizing their company, defaming and violating U.S. law regarding organized crime.

In the summer of 2017, it appeared that Siemens gas turbines were delivered to Crimea, bypassing the EU ban on the supply of energy equipment to the annexed peninsula. On July 11 of the same year, Siemens filed a lawsuit with the Moscow Arbitration Court, accusing Technopromexport, a subsidiary of Rostec Corporation, of violating contractual obligations. According to the plaintiff, the contract stipulated that the turbines ordered from a German company would be used at Taman power plants. However, the equipment was delivered to the Crimea. According to Siemens, the Russian state company deliberately departed from the terms of the contract.

No wonder the Rostec Corporation was nicknamed Rosvaacumcleaner for striving to take over most of the country's industry. Assets captured by him are among the most important levers of the Kremlin’s influence on domestic economic and political processes. In April 2014, Chemezov, along with other individuals and organizations close to the Russian government, was included in the sanctions lists of the European Union and the United States due to Russian armed intervention in the internal affairs of Ukraine and the illegal annexation of Crimea.

The making of a neo-KGB state

Twelve Who Have Putin’s Ear

Sergey Chemezov turns out to be owner of $76 million apartment