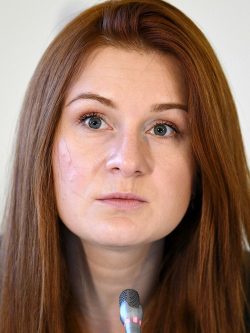 Maria Butina was born on November 10, 1988, in Barnaul. She showed quite an early interest in getting involved in politics. In 2006-2007, she was a youth-work specialist at the Altai territory branch of the Fair Russia party. In 2008, she was elected a member of the Public Chamber of the Altai Territory and held this post until 2010, at the same time managing its press service. During these years, she was a journalist, wrote op-eds for Altai regional newspapers and periodicals. She advocated for the legalization of arms trafficking, which then became the main topic of her social and political activities in the future.

In 2010, she graduated from Altai State University with a degree in political science and pedagogy. In the same year, she became the founder of the public organization Right to Arms. Since 2011, she studied political processes, institutions, and technologies at the university graduate school. She titled her thesis “Problem movements as an actual phenomenon in modern Russia.” The same time marks Butina's first attempts to improve relations with the authorities, becoming part of Putin's system. That year, Maria won the Youth Primaries of the Young Guard of United Russia (youth branch of the ruling party).

From 2012 to 2016, she worked as a special assistant to the first deputy chairman of the Federation Council of the Russian Federation, Alexander Torshin, “making an indelible impression on the respectable elderly senator.” Torshin joined Butina's Right to Arms movement, providing the social movement with financial and informational support. Butina was a co-author of the expert report “On the issue of reforming Russian arms legislation,” published under the guideship of Senator Torshin in 2012. Subsequently, she undertook trips to the United States in Torshin's company, where she met with representatives of the Federal Reserve System (FRS) and the US Treasury Stanley Fisher and Nathan Sheets.

Lobbying and propaganda activities in favor of the Putin regime, corruption scandals with American officials, deliberate distortion, falsification of facts, and defamation against representatives of the anti-Putin Russian opposition, primarily Alexei Navalny; the de facto leveling of the situation of Russian political prisoners and criminals serving imprisonment in US penitentiaries in their reports and public speeches; blurring the boundaries between journalism and propaganda.

In 2015, while on another trip to the United States, Maria Butina began to make acquaintances among Republicans with related views on protecting the rights of gun owners. In July 2015, Maria took part in the campaign rally of US presidential candidate Donald Trump, asking the future president about his political intentions towards Russia and receiving a positive response. In June 2015, she published an article “The Bear and the Elephant” in the American magazine The National Interest, according to which, to improve relations between Washington and Moscow, a Republican candidate should have won the American elections (the article was published on the eve of Trump's nomination). It’s worth saying that since 2002, a member of the editorial colleague of the magazine has been another Russian senator, Alexei Pushkov.

Since 2016, she has been in the United States on a student visa. During her stay in the United States, Butina, according to The New York Times, attempted at least twice to organize a secret meeting between Trump and Putin during the 2016 US presidential campaign. The American media published critical materials about Butina; several senators demanded an investigation of her activities. The American press learned that in the spring of 2018, Butina, in the presence of a lawyer, “voluntarily gave testimony to representatives of both parties in the special intelligence committee of the US Senate for eight hours in a closed session, and also provided them with thousands of documents.”

In April 2018, a search was carried out in Butina's apartment in Washington. By the summer, Maria, experiencing problems with employment, began to prepare to return to Russia and pack her bags, and on July 15, 2018, on the eve of the Trump-Putin meeting in Helsinki, she was arrested by the FBI in Washington without prior notice to the Attorney General. The Russian Foreign Ministry regarded Butina's arrest as timed to coincide with the meeting of the Russian and US presidents in Helsinki and aimed at “minimizing its effect” and disrupting the results of the summit. The documents of the US Department of Justice indicate that Butina was in a relationship with the Republican political scientist Paul Erickson (on July 6, 2021, he was sentenced to 7 years in prison for fraud and money laundering), and through him, she received contacts of other American politicians. The FBI found letters and SMS to Butina, in which she regularly asked Erickson to complete homework assigned at the college, edit coursework, give answers to exam questions, etc. From these facts, the prosecutor's office concluded that she was a fictitious graduate student at the American University in Washington. And the real purpose of her stay in the United States was espionage and lobbying for the interests of Putin’s Russia.

In July 2018, the US Justice Department accused Butina of conspiracy to work as a foreign agent without notifying the US authorities, of “infiltrating organizations that have an impact on US policy to advance Russia's interests.” In mid-August 2018, Butina was transferred to Alexandria Prison, Virginia. On April 26, 2019, a court in Washington sentenced Butina to 18 months in prison and approved deportation to the Russian Federation after serving the sentence. On October 25, 2019, Butina was released from the Tallahassee federal prison after serving a partial 18-month sentence. On October 26, 2019, an Aeroflot plane took her off from Miami to Moscow, and Butina returned to Russia.

Soon after returning to Russia, Butina resolved her employment problems by joining a government-sponsored media empire. In December 2019, Maria Butina got a job at the propaganda TV channel RT as the host of the “Beautiful Russia boo-boo-boo” program (the video introducing her as the new co-host of the stream was called “Beautiful Maria Boo-boo-Butina”). Besides Butina, ex-FBK employee Vitaly Serukanov and RT producer Dmitry “Mitya” Leontyev are among the hosts of the stream programs. She also continued to work in government agencies. After returning to Russia, she entered the Expert Council under the Commissioner for Human Rights in Russia and became a member of the Public Chamber of Russia, where she designated her specialization “in protecting the rights and interests of Russian citizens abroad and in the Russian prison system.” Besides, she became the founder of the fund “We do not abandon our own,” which she presented on the air of the RT on March 18, 2021.

A new round of Butina's propaganda activities began when on April 1, 2021, she (as a member of the Public Chamber of Russia) visited opposition politician and political prisoner Alexei Navalny in correctional facility IK-2 in the city of Pokrov. She filmed a report about this visit for RT (the story was shown on Russia Today for Western audiences, as well as on NTV for the Russian) and published an article on April 2. The plot of the story, in particular, repeatedly sounded accusations that Navalny refuses to clean the common area, “to wash the floor” (although even if we approach this issue from a purely formal point of view, according to the Internal Regulations, convicts should not independently wash the floor in the barracks, they should be cleaned by convicts who are officially employed as “cleaners of the premises,” receiving the minimum wage for this work, for which the penal colonies get money). Aleksey Navalny himself, who at that time already complained of health problems and the lack of provision of the necessary medical treatment from the management of the penitentiary institution (for this reason, he went on a hunger strike), greeted Butina's visit to him in the colony with the following words: “Instead of a doctor, a wretched propagandist from the RT channel Butina arrived today accompanied by video cameras. She screamed that this is the best and most convenient prison.”

She continued her participation in political activities in Russia within the United Russia party. On May 31, 2021, Maria Butina won the primaries of United Russia, and then on June 19, 2021, at the 20th Congress of the United Russia political party, she was approved as a candidate for the State Duma from the Kirov region.

Mariia Butina, Who Sought ‘Back Channel’ Meeting for Trump and Putin, Is Charged as Russian Agent

Maria Butina Loved Guns, Trump and Russia. It Was a Cover, Prosecutors Say

Russian ‘agent offered sex for job in US

Maria Butina, Accused Of Being Russian Agent, Has Long History Of Urging Protest