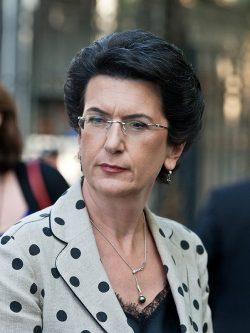 BURJANADZE, Nino (b. 1964) is a Georgian politician and a former speaker of the Georgian parliament. Born into a Soviet nomenklatura family, she graduated from the law faculty of Tbilisi State University in 1986 and in 1990 received a Ph.D. in law from Moscow State University. In the early 90s, Burjanadze worked as an expert in the Ministry of Ecology of Georgia and the Committee on Foreign Relations of the Georgian Parliament. In 1995, she was elected to Parliament. From November 2001 to 2008, Nino Burjanadze was the speaker of the Georgian parliament; she played one of the key roles in the Rose Revolution. She was an interim president of Georgia twice, from November 2003 to January 2004 and from November 2007 to January 2008. In 2008, Burjanadze joined the opposition to the then-current Georgian president, Mikheil Saakashvili, and created the Democratic Movement - United Georgia Party.

Nino Burjanadze is married to the former head of the Georgian Border Guard Service Badri Bitsadze, accused of organizing provocations during protests in May 2011 and creating an illegal paramilitary group. According to the Georgia Online, Bitsadze left Georgia through the territory of self-proclaimed South Ossetia (controlled by Russia) after the failure of the coup and is now hiding in one of the EU states.

Lobbying the interests of the Putin regime in Georgia and participating in the information war on the Kremlin’s side.

Shortly after the Kremlin’s aggression against Georgia in August 2008, Nino Burjanadze accused President Mikheil Saakashvili of starting a war. Since then, Burjanadze regularly visits the Russian capital, meets with Vladimir Putin and other Russian officials. In her interviews with Russian and Western journalists, she sympathizes with the Russian leadership, denies the authoritarian nature of the Russian system under Vladimir Putin (unlike the presidency of Mikhail Saakashvili in Georgia), and argues that “Georgia needs a president like Putin”.

The Burjanadze’s party freely takes part in elections in Georgia and advocates for the country's neutral status, rejection of integration with NATO and the EU, and rapprochement with Putin's Russia. In 2015, the Ukrainian authorities declared the former speaker of the Georgian parliament a persona non grata due to her support for the annexation of Crimea. So, during her visit to Moscow in July 2015, she stated that “Crimea will continue to be Russian”, that she sees “no chance that Crimea will ever become a part of Ukraine” and called the results of the Crimean “status referendum” objective. Nino Burjanadze sharply criticizes sanctions against the Kremlin for the annexation of Crimea and the outbreak of war in Eastern Ukraine. In 2018, she also clearly opposed the independence of the Ukrainian church from Moscow.