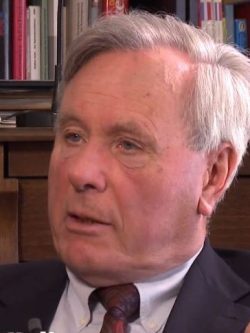 VON BÜLOW, Andreas (b. 1937) is a German politician from the Social-Democratic Party (SPD). Born into a wealthy family in Dresden, he graduated from the universities of Munich and Heidelberg in 1960. From 1966, he worked as an administrative clerk in Heidelberg, Balingen and South Württemberg-Hohenzollern. Since 1960, Bulow has been a member of the SPD. From 1968 to 1975, he was chairman of the district association of the SPD in Balingen. From 1969 to 1994, von Bülow was a member of the German Bundestag and a member of the parliamentary committee on intelligence services. From 1976 to 1980, von Bülow was the parliamentary state secretary of the Federal Ministry of Defense. After the federal election in 1980, he was appointed Federal Minister of Research and Technology in Helmut Schmidt’s government. On October 1, 1982, he retired after the election of Helmut Kohl as Federal Chancellor.

After leaving the government and the Bundestag in 1994, von Bülow started writing op-eds on special and intelligence services. When much information about criminal methods of the communist secret police and intelligence became public, he decided to study covert operations of the Western secret services, which he published in his first book, ‘In the Name of the State’.

Lobbying for the Putin regime, disseminating conspiracy theories and misinformation aimed at the erosion of Euro-Atlantic solidarity.

After leaving the civil service in the mid-1990s, von Bülow found his vocation as a whistle-blower of Western intelligence services. In his first book, published in 1998, he linked Mossad, the CIA, and the BND to the drug trade and terrorism conspiracy. However, many critics pointed to a limited and ambiguous list of sources for the book, and the author’s weak journalistic style.

Von Bülow's second book, ‘The CIA and 9/11’, published in 2003, reviewed the 9/11 terrorist attacks and the involvement of US government agencies. According to him, the CIA “invented” a story about Osama bin Laden and the 19 Islamic terrorists, and the fact that among more than 3 thousand dead there was only one Israeli citizen indicates that the attack was carried out by Mossad. Some of Bülow's theses echo the well-known 9/11 conspiracy theories. Von Bülow was accused of resorting to unreliable sources and not understanding the topic. In some translated editions of the book, in particular, Arabic and Russian, he incorrectly titled himself “the former head of German intelligence”.

Since then, von Bülow began to appear at pro-Putin and anti-American events and give comments on behalf of the “former head of German intelligence”. Thus, he calls the EU and Germany the “colony” of the United States and demands the lifting of sanctions against the Kremlin. In an interview, he said, “Although European governments grumble from time to time, they ultimately follow directions from Washington. They participate in... dangerous military adventures on the borders of Russia, although they once promised that the alliance would not come close to the borders of Russia by an inch...” In his opinion, only rapprochement with Putin can “save Germany from its final transformation into an American colony”. It is also worth noting his remarks regarding the Malaysian Boeing downed by the Russian missile in 2014: “Everything says that it was a special operation to blame either directly the rebels, or indirectly the Russians. [...] Highly likely it was a false flag operation”.

In 2014, von Bülow took part in a conference “Peace with Russia. For sovereign Europe” in Berlin. Besides him, the SPD veteran Egon Bahr and Willy Wimmer (CDU), the former Deputy Minister of Defense participated in it. According to a report by Wolfgang Storz, former editor-in-chief of Frankfurter Rundschau, the members of this information network, with financial and organizational support from Putin's Russia, managed to create a “stable range” of political and media platforms, consisting of “daily network services, newsletters, blogs, video content, Internet TV, one monthly magazine, books, events, conferences”, and thereby to achieve “full communication coverage”.